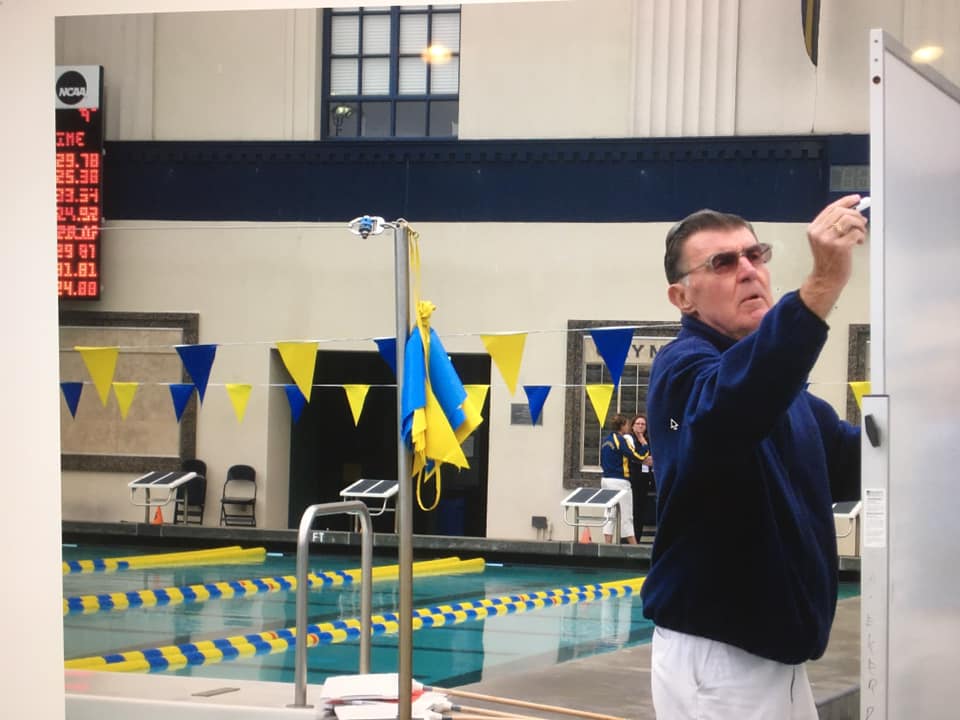 Nort Thornton, who was the head coach of the Cal men's swimming & diving team for 33 years, has been hospitalized in an intensive care unit. Archive photo via Jeff Prior

Cal swimming & diving Head Coach Emeritus Nort Thornton has been hospitalized in a California intensive care unit due to complications with his heart.

The 87-year old Thornton retired as head coach of the Cal men’s swimming program in July 2007 after 33 years. During that tenure, Cal athletes won 48 individual and relay NCAA Championships and 108 Pac-10 individual and relay championships. He led the Cal men to back-to-back Pac 10 titles in 1980 and 1981 and back-to-back NCAA titles in 1979 and 1980.

A Facebook group has been started where family, friends, and former athletes can leave memories of Thornton.

Cal finished the season ranked in the top 10 in national polls in 28 of the 33 years where he was the program’s head coach. He was twice named National Coach of the Year and four times named Pac 10 Coach of the Year.

Among the swimmers who came out of the program under his watch were World Record holder Matt Biondi, Olympic gold medalist Anthony Ervin, and Olympic silver medalist Duje Daganja – all among the best sprinters of their eras.

In total, 48 Cal athletes competed at the Olympics winning 29 medals (14 gold, 10 silver, and 5 bronze) while Thornton was head coach. That doesn’t include the exploits of swimmers like Milorad Cavic and Nathan Adrian, who Thornton recruited to Cal and was the early collegiate coach of, but who won their Olympic medals after his retirement.

Thornton was the head coach of a United States World Cup team in 1979, and the U.S. World University Games team in 1981. He served as an assistant at the 1983 Pan American Games, the 1986 World Championships, and the 1997 Pan Pacific Championships.

Thornton was also a president of the American Swimming Coaches Association.

Working with Dick Hannula, Thornton was also the co-author of the Swim Coaching Bible (in two volumes), which is one of the most prominent and best-selling books ever written on the topic of competitive swimming.

After retirement, Thornton remained active as a volunteer coach with the program, saying in a 2011 interview that this was his dream job.

Nort is one of the finest gentlemen in the sport. Best wishes for a speedy recovery.

He also coached Paar Arvidsson, the Swedish Cal swimmer, who won the 1980 Olympic gold medal in the 100 fly.

Nort’s a gentleman and a class act and respected by all. Prayers go out to him, his family and the countless lives he touched and I hope he gets better soon!

Nort is a class act in the sport and getting to be coached by him and his son growing up was truly a blessing. Best wishes for a speedy recovery and prayers to the whole Thorton family

One of our greats, a Hall of Famer in every way. Professional, Gentleman, Scholar of the sport, and a great contributor to our wonderful sport of swimming.

“Swim Coaching Bible (in two volumes), which is one of the most prominent and best-selling books ever written”

I think you may have missed a qualifier there…

Best wishes for speedy recovery for a legend