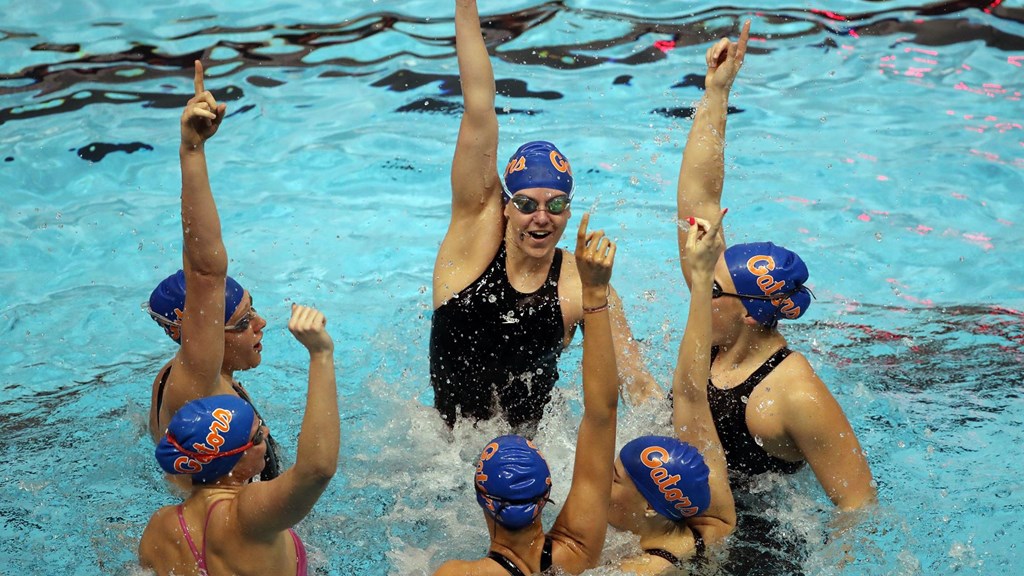 Florida honored its seniors prior to a 176-74 home victory over North Florida on Wednesday. Current photo via Florida Athletics

The University of Florida women celebrated Senior Day in style on Wednesday, rolling to a dominant victory over North Florida at the Stephen C. O’Connell Center in Gainesville.

The Gators ended up sweeping all 14 events on the day, finishing with a final score of 176-74, making some of the final swims from Florida athletes officially entered as exhibition.

“Today was a big day for us,” Florida head coach Jeff Poppell told Florida Athletics. “It was an opportunity to honor our seniors at their last home competition as Gators, a season-ending competition for another group of athletes, and a valuable opportunity to fine tune and prepare for the upcoming SEC Championships for several others.”

Picking up two individual events for the dual was Talia Bates, Katie Mack and Adrianna Deboer, with Vanessa Pearl also posting the fastest time in two events but with one entered as exhibition.

Bates followed up with a second best time in winning the 100 fly, clocking 52.77 to get under her old best of 52.82 set back in November of 2018. Those two swims also put Bates into 10th and ninth on Florida’s all-time list, respectively.

Mack, also a sophomore, doubled up in the 50 and 100 freestyle, sliding under her personal best times in 22.34 and 49.00, respectively. The 50 free ranks her ninth all-time for the Gators.

Junior Vanessa Pearl put up the fastest time in the 200 breast at 2:09.45 as exhibition, and then won the 400 IM in 4:12.20. Freshman Kathleen Golding, racing the event as exhibition, led Pearl at the 200, ultimately falling behind on breast to post the second-fastest time at 4:12.43.

Along with Mack and Bates, first-year Amanda Ray jumped to #5 on the Gators’ all-time performers list by dropping over two seconds to win the 200 fly (1:55.26), and sophomore Tylor Mathieu took over 10th in the 200 breast in her 2:12.53 exhibition swim.

Both teams will be back in action on Saturday, with Florida travelling to Auburn to take on the Tigers and North Florida hitting the road to battle Georgia Southern.