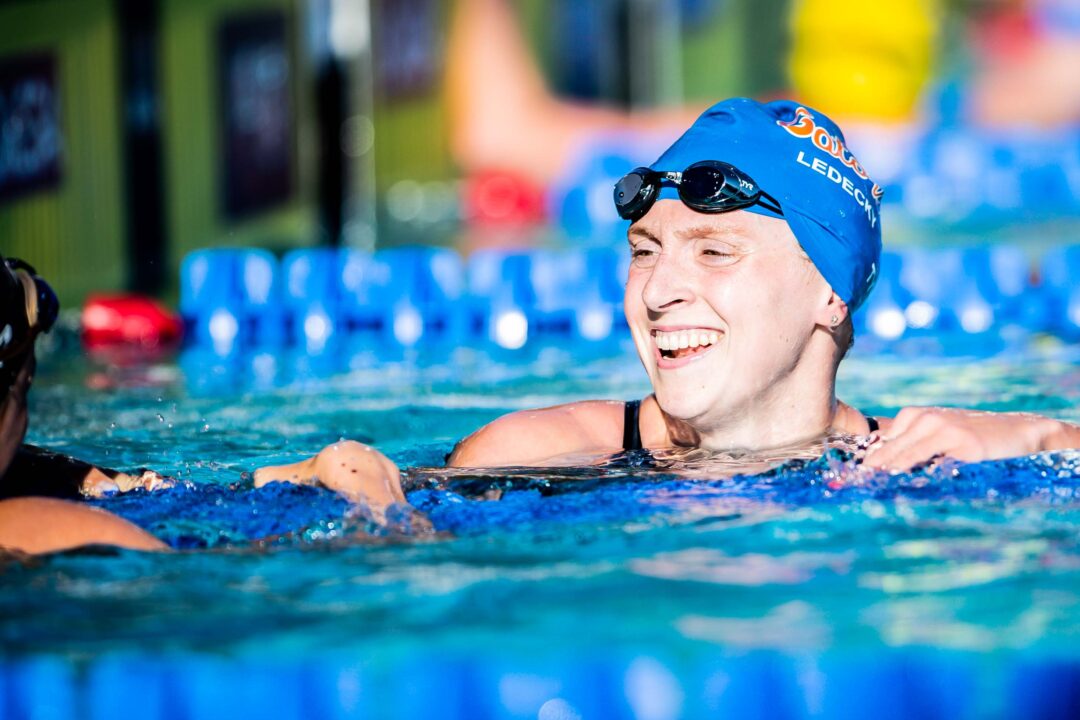 Katie Ledecky will swim her first SCM race since 2019 at the second World Cup stop, one of the biggest storylines ahead of a busy weekend in Toronto. Archive photo via Jack Spitser/Spitser Photography

Entries for the second leg of the 2022 FINA World Cup have been released. You can look at the full psych sheet using the link above, and here we’ll be talking about some of the biggest storylines in play for this stop in Toronto. This is the first time in over 20 years that Canada has hosted a World Cup event, and it looks like it’s going to be an action-packed weekend.

Katie Ledecky surprised many people when her name turned up on the entry lists for the FINA World Cup. For as much as she’s excelled for over a decade in both long course meters and short course yards, the superstar hasn’t raced much in short course meters. In fact, she’s only ever raced in the SCM pool twice—an October 2019 ISL match in what was her first and only appearance for the DC Trident, and the 2013 Duel In The Pool in Glasgow.

A lot has happened for Ledecky in the interim; she’s completed an Olympic cycle, and she switched her training base from Stanford to Florida. That move has worked out well for her so far–this summer she put up some of the fastest times of her career–and now it’s time to see what kind of speed she can bring to short course meters.

She’s entered five events: the 200, 400 and 1500 freestyle, and the 200 and 400 IM. At U.S Nationals post-Worlds, Ledecky opted to swim ‘fun’ races, which for her meant the 400 IM and time-trialing the 200 fly. She seems to be taking a similar approach to this meet, entering both IMs along with her bread-and-butter freestyle races. If she swims both of them it will be fascinating to see what kind of times she can put up; she’s never raced either of them in SCM, and the 4:35.77 she put up to win a thrilling race against Leah Smith at U.S Nationals was a lifetime best.

This weekend will mark Ledecky’s SCM debut in the 1500 free. The world record stands at 15:18.01, courtesy of Sarah Wellbrock (née Kohler) at the 2019 German Championships. There are multiple opportunities for world records to go down at this meet, and this event is certainly one of them. More on that later, but with Ledecky in attendance, the likelihood of at least one world record going down went up dramatically.

Siobhan Haughey looked great in Berlin after a summer spent recovering from an ankle injury. She topped the women’s leaderboard with 58.8 points after winning the 100, 200, and 400 freestyles (51.59/1:51.36/3:56.52). She’ll look to keep her spot at the top of the rankings in Toronto, but it’s going to get a little tricky. As more Canadians and Americans join the fray, Haughey’s path only gets trickier, while someone like Beata Nelson, who is challenging her for the overall series title, has a much clearer path.

Haughey is entered in the 50/100/200/400 free in Toronto. Swimmers earn points based both on where they finish and how many FINA points they earned in the swim. There’s no restriction on how many events an athlete can enter, but only their top three performances from each meet count toward their point total. That means that Haughey is facing a tough decision: she excels in meters but she has to choose whether the 50 or 400 free will earn her more points.

Ultimately, it’s a toss-up, but there are lots of little factors that point towards opting for the 400. In the 50 free, she’ll go up against Kasia Wasick; is she confident that she can beat a pure sprinter? In the 400, she’ll face tough competition in Ledecky and Summer McIntosh.  Haughey does have more experience in World Cups than either of them, is in a groove, and Ledecky and McIntosh both have busy schedules that could potentially lead to a scratch (though with the 400 free being the first event of the meet, that seems unlikely). And winning the 400 ahead of those two powerhouses would be a nice feather in her cap on an international stage.

If Haughey does choose the 400 free, then we’ve got our next big storyline of the meet…

If this comes together, it could easily be the race of the meet.

Ledecky needs no introduction. She’s proven herself over and over again at this race in meters, and now she’ll show us for the first time in a long time what she’s capable of in the short course meters pool. Her lifetime best stands at 3:54.06 from the 2019 ISL season,  which was just .14 seconds off Ariarne Titmus‘ world record of 3:53.92. However, at the Chinese Swimming Championships, Li Bingjie negative split her way to a new world record of 3:51.30.

Summer McIntosh fully arrived in meters this summer, impressing both at the World Championships and Commonwealth Games. She posted her lifetime best of 3:57.75 in fall 2021 at an ISL meet but after the summer she had, it’s easy to see her making a big drop.

Then, there’s Haughey, who’s riding a hot hand right now and is excellent in meters. She’s the 2021 SC Worlds bronze medalist in this event, and the 3:56.52 she posted to win in Berlin was a lifetime best. The 400 free is her upper distance limit–where she shines is in the 100 and 200 free–but she’s proven herself capable of being competitive at this race, especially in a 25-meter pool. You can make the argument that she’s the underdog in a race against Ledecky and McIntosh, but if she is, it’s not really by much.

Ruta Meilutyte scared Alia Atkinson‘s 50 breaststroke world record in Berlin. She ripped a 28.60, shattering her old European record and touching just .04 seconds away from Atkinson’s all-time mark of 28.56. Meilutyte has made a remarkable comeback to the sport this year: she earned gold in the 50 breast and bronze in the 100 at both the World and European Championships (LCM).

She showed in Berlin that she’s ready to keep rolling in the 25-meter pool. Not only did she win the 50 breast in record time, but she also touched first in the 100 with a sizzling 1:03.07. After setting her new European record, the sideline reporter asked her if she expected to be that fast. “Yes,” she replied. You’ll definitely want to tune in to see if she can go even faster in Toronto.

NCAA Swimmers Arrive On The Scene

There’s a bevy of NCAA swimmers traveling to Toronto to spend the weekend racing in meters. Plenty of them are Olympians as well: Maggie MacNeil, Brooks Curry, Anna Elendt, Lydia Jacoby and Caspar Corbeau are some of the many making the trip. It’s still early in the NCAA season, but we’ve already seen plenty of fast swimming in yards. How will that early-season yards speed translate into meters? It’s not as big as the jump American college swimmers had to do in the spring from NCAAs to International Team Trials, but it’s not insignificant.

Out of all the NCAA athletes racing, one in particular that’s worth highlighting is MacNeil. Now reunited with Rick Bishop at LSU for her fifth year of eligibility, she’s spent the fall rewriting the school record book and putting up some blistering times. That includes briefly holding the record for the fastest unsuited 100 fly of all-time at 50.84, until Gretchen Walsh went 50.53 last weekend. Given that the move to LSU has paid off for her in yards, what kind of times will she be able to throw down suited in SCM? Don’t forget, she’s the world record holder in the 50 back–how close can she get to her mark of 25.27?

The diving world cup in Berlin was a complete failure so maybe they don’t try to combine swimming and diving again . Only sixty athletes total 😂

Meilutyte vs King could be fun but probably King won’t be in peak shape until worlds.

King hasn’t been in peak shape since the 2019 WCs.

Oh for god’s sake she just won a world title in the 200 breast, give her a break.

Why are FINA points so much higher the longer the distance? There was a meet in Australia where the highest FINA points won a prize, and it always went to an 800 or 1500 metre swimmer every year (male and female).

Probably because the long distance events have the least developed competition. So the based time (world records) used to calculate points is slow and many swimmers are showing times not far from it.
And I think I understand the reason of such dislike of long distance events in short pool. Try to do the following exercise and you will understand it.
Stay next to the wall in the pool and each 10-12 seconds make a flip turn. No swimming, just turns. After making 60 of them for 15 min in a row you will lose the orientation and will not know where the sky and where the ground.
Alert: do this exercise under supervision only to avoid drowning. 😀

FINA points are determined using a formula that means the further from the WR you are, the less points you get, and this difference is calculated using a % instead of a raw time. If you swim an equal WR you get 1000 points exactly.

Because of the way the points are calculated, which essentially uses the % difference, it’s easier to get more points in longer distances. And points drop off dramatically because of the exponential nature of the formula

For me the most anticipated race is Ledecky in 400IM. She significantly improved her personal best in long pool earning #4 rating this season and she has proven to be a strong IMer in SCY holding at some point American record. In the 400IM SCM we have actually 5 strokes with underwater taking almost 50% of the distance. That allows her to compensate the weakness in her slow strokes like breaststroke and backstroke.

I’m not sure if Ledecky is known for her underwaters though. I don’t think she’ll be compensating those weak strokes with much…

Who do we think: Ledecky or McIntosh tmmr ??

I’m gonna go out on a limb and actually say Haughey. I think she’s the dark horse in all of this, and I think she’s gonna upset both KL and SM

Sad to see Ledecky isn’t swimming the 800 but it will be fun to see her race some other events!

The 800 isn’t offered at the Toronto stop. I’m sure she will race it in Indianapolis.

Jacoby is there also