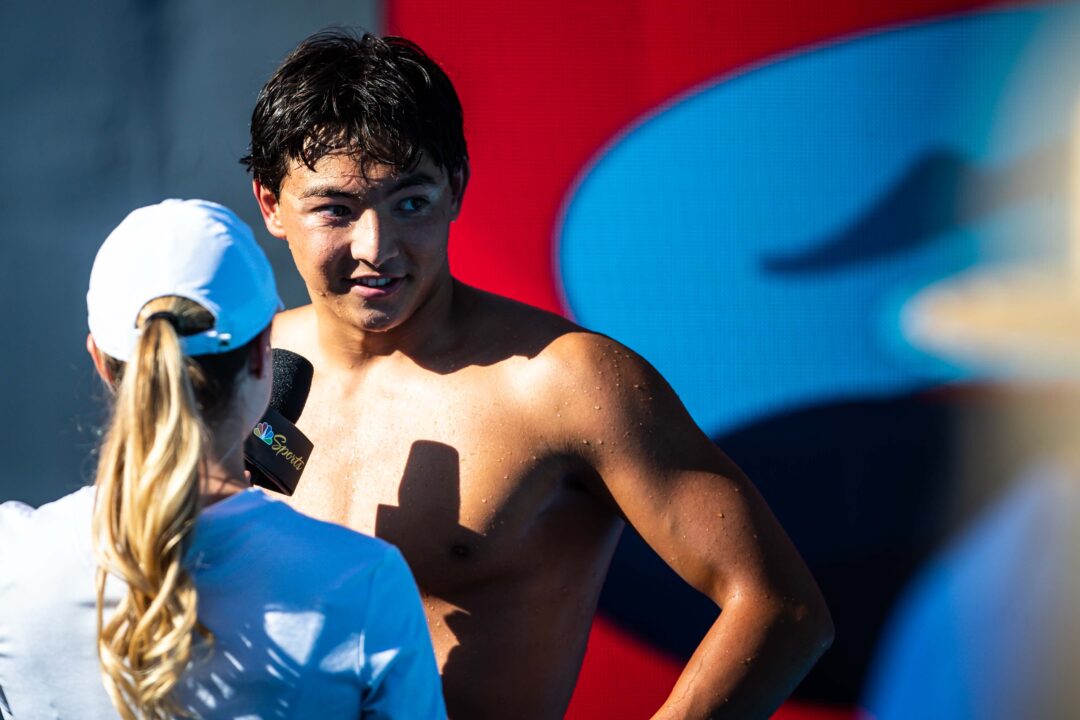 In this article, we break down our five main takeaways from the men's side of the 2022 U.S. National Championships meet that happened last week. Archive photo via Jack Spitser/Spitser Photography

The 2022 US National Championships have concluded, and there was certainly a lot of action on the men’s side of the meet. In this article, we break down the top takeaways that we got from five days of competition.

1. We Know What Shaine Casas‘ Best Events Are Now

This year we learned that Shaine Casas is a hyper-versatile athlete, being good at the backstroke, freestyle, butterfly, and IM races. However, after seeing his performances at U.S. Nationals, it is clear that the 100 fly and 200 IM stand above the rest of his events.

Despite having initially developed as a backstroker and winning a bronze medal in the 200 back at this year’s World Championships, Casas’ standing in the all-time top performer rankings for the 100 fly and 200 IM are significantly higher than they are in both the 100 and 200 back. Amongst Americans, Casas is only slower than Michael Phelps and Caeleb Dressel in the 100 fly and Phelps and Ryan Lochte in the 200 IM. And while Casas is a great backstroker, he’s putting up times in the 100 fly and 200 IM that very few swimmers have been capable of going.

Shaine Casas‘ Events And Their Rankings Amongst All-Time Top Performers:

Now, how does Casas decide his event lineup for the 2024 Olympic Trials/Olympic Games? We’ve concluded that the 100 fly and 200 IM are Casas’ best events, but they also happen to be extremely competitive. World record holder Caeleb Dressel and Michael Andrew are either faster than or near Casas’ best 100 fly time, while Andrew and Carson Foster will be a challenge for him in the 200 IM. In addition, the 100 fly semi-finals and 200 IM finals will be back to back on the event schedule for both trials and the Olympics, which will be something that Casas will have to consider when choosing his events. However, this a double that Phelps has pulled off time and time again, so there’s no reason as to why Casas isn’t capable of handling it.

So far, Casas’ best bet to make the 2024 Olympic team will be the 200 back. Sprint backstroke is extremely competitive with the likes of Ryan Murphy, Hunter Armstrong, and Justin Ress, but in the 200 back, Murphy is the only man in America aside from Casas who has been faster than 1:56 (this is assuming that Bryce Mefford, who has a best time of 1:54.79 and has not raced long course since the Olympics, will retire). In addition, if he improves just a bit from his best 1o0 free time of 48.23, he should be able to get himself on the 4×100 free relay. That being said, Casas hasn’t raced the 100 fly and 200 IM all that often, so his ceiling is higher than any of his American rivals.

2. Matheny And Fallon: A Rising Force Of Young Breaststroke Talent

While Nic Fink and Michael Andrew are the established faces of American men’s breaststroke right now, their time is eventually going to come to an end. However, there’s one emerging star in the 100 and 200 breast apiece that showed their potential at Nationals this week.

The most obvious one is Matt Fallon, who clocked a 2:07.91 in the 200 breast that would have one, won U.S. trials by a nearly a second, and two, taken silver at this year’s World Championships. People started paying more attention to him after his 2:08.91 from Olympic trials last year, but his performance at Nationals really cements himself as that next great American 200 breaststroker. After medaling in the 50 and 100 breast but failing to make the podium in the 200 at Worlds, it’s likely that Fink will be focusing on the sprints. That second spot in the 200 breast has been a toss-up recently, with the now-retired Andrew Wilson taking it in 2021 and Charlie Swanson taking it in 2022. With the men’s 200 breast being wide open, 2023 trials is the perfect opportunity for Fallon to qualify for his first international team.

In the 100 breast, Indiana’s Josh Matheny has a personal best time of 59.44, which is still very far from Andrew’s 58.14 and Fink’s 58.37. However, he’s only 19 years old and swims for Indiana, which has been the best breaststroke program in the country in recent history. Matheny has been rapidly improving since he got to IU, as prior to his freshman year, his personal best time was a 1:00.44. If he continues to drop time at this rate, he could be finding himself challenging for a spot on that Paris Olympic team. Read more about Matheny’s swim and what it means for the focus of American men’s breaststroke here.

At U.S. Nationals this year, there were a whopping five different swimmers who weren’t on the 2022 World Championships team in the 200 free, but swam faster than 1:46.93 that it took to make that team (Luke Hobson, Jake Magahey, Grant House, Jake Mitchell, Jack Dahlgren). And while swimming fast at the right moment is still what matters the most, this only goes to show how competitive the 200 free is going to be come time for the 2023 World Championship trials next June.

While Drew Kibler, Kieran Smith, and Carson Foster seem to be a head above the rest in the 200 free, there’s three more qualifying spots that look to be wide open for that 4×200 free relay. The 5th and 11th-fastest swimmers this year are only separated by 0.31 seconds, which goes to show just how many swimmers there are in that 1:46-mid range who could potentially vye for relay spots next year. In addition, there’s also a batch of rising talents (Gabriel Jett, Michael Cotter, and Patrick Sammon for example) who are either just out of high school or their freshman year of college—the primal age for huge time drops amongst male swimmers.

Ryan Murphy is currently the only swimmer from the 2022 World Championships team that is a Cal swimmer and still trains at the school. This is a sign that the Golden Bears are in search for a new long course star, and Gabriel Jett might just be their answer.

Coming into the 2021-22 collegiate season, Jett was just a “best of the rest recruit” on our list. He then had a breakout meet in yards at the 2021 Minnesota Invite, going best times of 1:32.52 and 4:13.90 in the 200 and 500 free respectively. However, he didn’t have a great Pac-12 or NCAA meet in either of those events this year, causing him to get overlooked by most again.

But as the year progressed, Jett began developing himself in another event: the 200 fly. It was the only event where he made the ‘A’ final in at NCAAs, finishing sixth in a best time of 1:40.22. Then, at long course nationals, he clocked a 1:54.37 time that was just 0.15 seconds off  Trenton Julian‘s 1:54.22 that finished second at the World Championship trials. Julian hasn’t been close to his trials mark since, which could open up a spot for Jett to qualify for an international team.

Jett has been making very good progress in other events as well, such as the 100 fly where he dropped over two seconds in a year, as well as the 200/400 free.

5. Virginia Men Are On An Upward Trajectory

Although NCAA swimming is done in yards, a big marker of success amongst college teams is how many swimmers they can put on long course international teams. Through the likes of Alex Walsh, Kate Douglass, and Paige Madden, Virginia has been very successful at that task on the women’s side. However, they are beginning to make that stride on the men’s side as well, thanks to stars like Matt King.

At Nationals, King won both the 50 and 100 free in lifetime bests of 21.83 and 48.33, with his 100 free time being fastest than Justin Ress‘s 48.36 that qualified for the men’s 4×100 free relay at World Championships this year. Prior to the 2021-22 season, his best times were 22.55 and 49.98, which goes to show how much he’s improved in long course over the last season. Considering that Todd DeSorbo has a great record of improving his swimmers in long course throughout college (shown through the improvements of the UVA women), King could be the first Virginia man to make an senior international team since Matt McLean in 2014.

Don’t forget about 200 back national champion Jack Akins either. He swam a 1:57.52 in his race at Nationals, but has been as fast as 1:56.29 before. He’s the next man in line behind Ryan Murphy and Shaine Casas in the 200 back, and at just 19 years old, he’s likely to be improving a lot more in the next few years. Akins has also had some great results in other events, such as the 100 free where he dropped nearly a second from his entry time of 49.98 to go a lifetime best of 49.05.