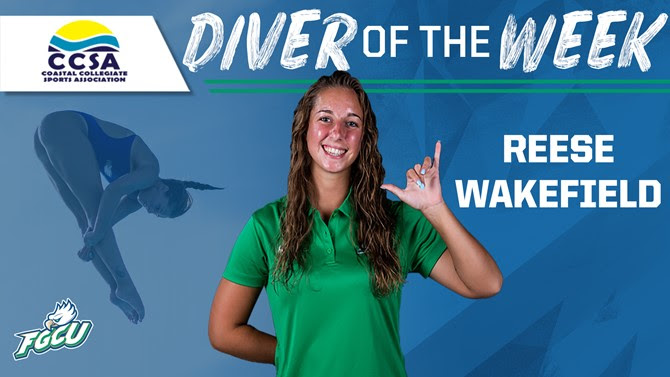 ATLANTA – FGCU swimming & diving freshman Reese Wakefield was named CCSA Diver of the Week for the third consecutive week, as announced by the league Tuesday afternoon.

“Congratulations to Reese on her continued excellent performances,” head coach Dave Rollins said. “It has been a pleasure having her as part of the Eagle Family and we are excited to see how she and the rest of the team perform in the coming weeks.”

This is the fourth recognition for Wakefield (Guelph, Ontario, Canada/Bishop Macdonelle CHS) this season, who now ties former UNF Osprey Julia Moomaw for the most weekly diving honors received by a freshman. Moomaw was also selected four times during her rookie campaign (2009-10).

Over the course of this weekend’s Midwestern road trip, Wakefield continued to perform at a high level for the Eagles (6-4, 4-0 CCSA). In the meet against Marshall and host Toledo (Nov. 8), she claimed the 3m title for the third time this season and earned a second-place finish on the 1m board. In FGCU’s meet against arch-rivals Oakland and host Eastern Michigan (Nov. 9), she won the 3m dive by almost a full 20 points to extend her streak in the event.

In addition to the continuous individual wins, Wakefield has already hit the qualifying mark for NCAA Zones on both the 1m and 3m boards not even halfway through the season.

The team is gearing up for its final meet of 2019, which will be at Houston’s Phil Hansel Invitational (Nov. 20-23). After that, the Eagles will have some time off until they return to the FGCU Aquatics Complex for a meet against Illinois State, Tulane and conference foe Liberty at noon on Saturday, Jan. 4.