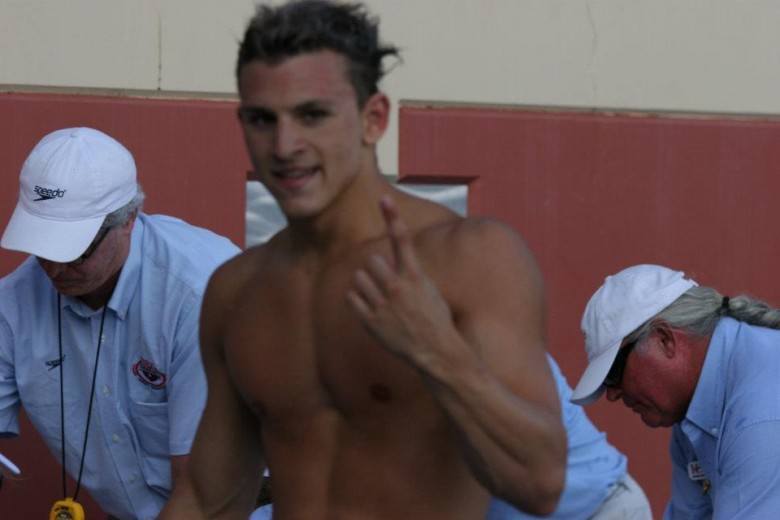 Erik Risolvato has had a winding swimming journey thus far, and it's a journey that will now continue under the banner of Puerto Rico. Archive photo via Erik Risolvato

Erik Risolvato has had a winding swimming journey thus far, and it’s a journey that will now continue under the banner of Puerto Rico.

Risolvato was once one of the top high school sprinters in the nation and set to attend the University of Arizona. But he eventually changed plans, first to swimming with junior college Indian River, then to not swimming entirely. Risolvato dropped off the map with no recorded swims at all in the year 2013.

He’s been on the comeback trail as of late, though, breaking 23 seconds in the long course 50 free this summer and competing at U.S. Nationals in August. He was 22.87 at nationals, taking 28th.

Now, Risolvato has told SwimSwam that he’ll be continuing his swimming journey by competing for Puerto Rico on the international stage, beginning with the Central American & Caribbean Games this November.

“About 2 years ago my grandmother on my mom’s side passed away while I was getting ready for the US Olympic Trials,” Risolvato told SwimSwam this week. “My grandmother was born in San Juan, Puerto Rico.

“I had contacted Puerto Rico to see if I was eligible to compete for them, and due to my grandmother being born there, I was. For me this was a very exciting opportunity to represent my family’s country and compete in international competitions for Puerto Rico.”

Risolvato will swim the 50 free and 50 fly at the Central American & Caribbean Games, which take place in Veracruz Mexico beginning on November 15th. He said the 100 free and 100 fly may also be added to his event schedule at the meet. He qualified for the CACG team after swimming in the San Juan International Open in early September.

Risolvato plans to continue competing for Puerto Rico, and hopes to represent the nation in the 2016 Olympics in Rio.

Puerto Rico, though a part of the United States, is one of just a few non-sovereign nations allowed to have its own Olympic team. Olympic policies changed in 1996, not allowing countries to field their own Olympic teams unless recognized as a sovereign nation by the United Nations, but Puerto Rico was among a handful of teams grandfathered in, because their National Olympic Committee had been recognized by the International Olympic Committee since 1948.

Risolvato has decided to forgo college swimming and instead swim professionally, training with his dad and has been swimming unattached thus far, though his Twitter feed (@TheRealERizzo) connects him to SwimGym Elite. He says he plans to compete on the Grand Prix circuit this coming season, plus the World Cup tour next year in Europe and Asia.

“Things haven’t been easy since I got back in the water but I’m very happy with what God has set before me and this is truly a dream come true,” Risolvato said.