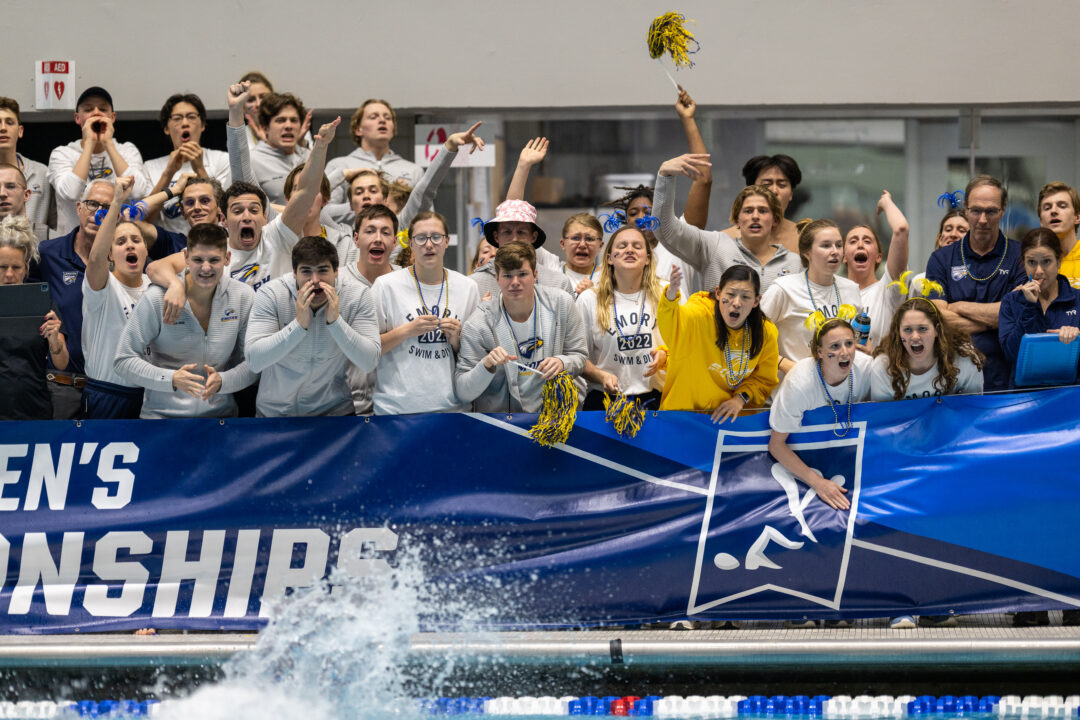 Emory broke Johns Hopkins record of 6:29.27 which had stood since 2013. Nicholas Goudie split a 1:35.37 anchor leg to help break the record. Current photo via Eugene Soh

The Kenyon Ladies outperformed the swimming projections by 23 points and eked out a victory over Emory by 7 points.

Despite only having one invidiual title winner, the depth of the Emory men’s swim team led them to their second title in program history.

Wentzel’s record marks the third time she has taken down the 200 breast record, being the only woman in DIII history to be under 2:12 and 2:11 in the event.

The Division III 200 backstroke record was set twice today, once in prelims and once in finals. The record now stands at a 1:41.49.

On night three of the Division III NCAA Championships, the Emory men set a new Division III record in the 800 freestyle relay in a time of 6:28.69. That time broke Johns Hopkins record of 6:29.27 set back in 2013.

The biggest difference between the two is that Nicholas Goudie anchored in a 1:35.37 for Emory this year. That is the only sub-1:36 split of either relay.

The Division III NCAA Championships did not occur last year, but even if they did Emory would not have been in attendance as they canceled their season due to COVID-19. At the most recent Division III Championships in 2019, Denison won in a time of 6:30.57.

Emory cruised to the win tonight as they won the event by over two seconds. MIT finished second in a 6:30.79.

This meet is incredible.

Statement swim. Emory’s got the title on lock. Also Hamilton has looked great. I think maybe 1:54 in the 200 breast

Goudie was out 45.2. Absolutely disgusting.

was Goudie’s split the fastest in history?

I believe so. Lovette was 1:35.9 anchoring at NESCAC which was the fastest before

he has one more season next year at emory curious to what he could potentially do. Historic record breaking year all around for D3.

He is officially a sophomore and has 2 more years.