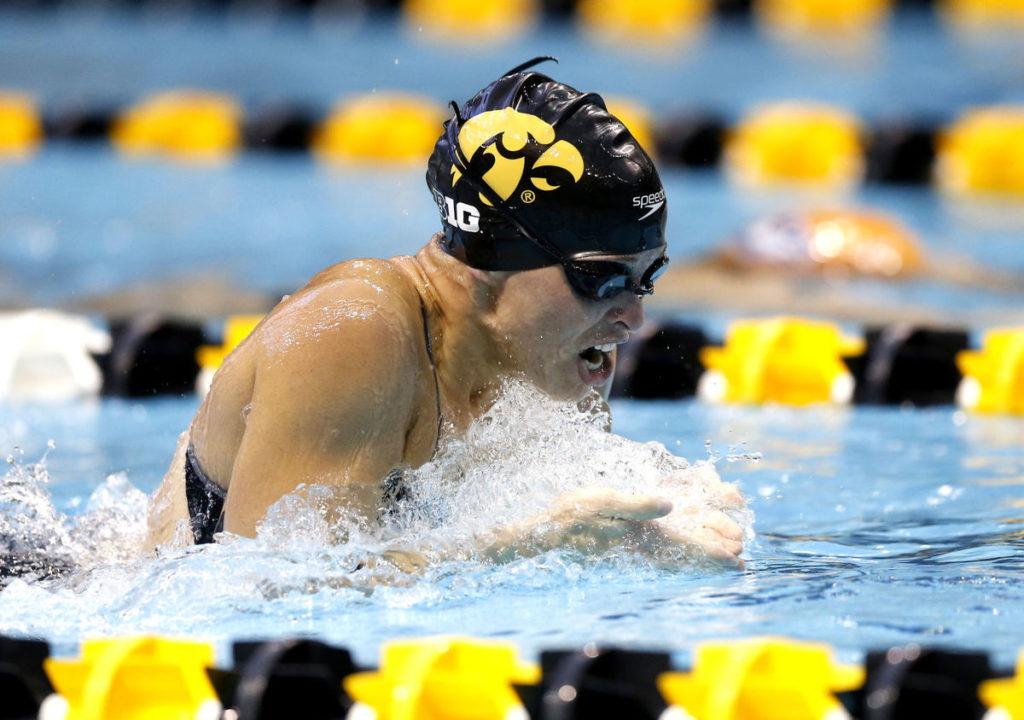 Emma Sougstad has been hired as an assistant coach at Miami University (Ohio) this coming 2017/2018 season.  Sougstad will join... Current photo via Globe Gazette

Emma Sougstad has been hired as an assistant coach at Miami University (Ohio) this coming 2017/2018 season.  Sougstad will join another incoming assistant coach Ryan Rich. They will be replacing Jack Eichenlaub and Dan Carrington.”I am most excited to help student athletes become the best versions of themselves both inside and outside the pool,” began Sougstad “the skills and experiences student athletes gain in their short four years transfer to the rest of their lives.”

Sougstad graduated from the University of Iowa this past spring. She is Iowa’s current record holder in the 100 fly and both the 100 and 200 breaststrokes. She placed 6th in the 100 Breaststroke at the 2017 NCAA Championships. “I always knew that coaching could be option but what made up my mind was the impact that my coaches made on my life at the University of Iowa.” Sougstad graduated with a degree in elementary education with a coaching endorsement.  “They believed in me and gave me a chance before I did. The uphill climb of shoulder surgery and coaching turn over were the deciding factors that I want to help others use the platform of sport to help form character in all aspects of life.”

“I chose Miami of Ohio because of the amazing opportunities available for staff, athletes, and community.” Sougstad began.  She will be joining other incoming assistant coach Ryan Rich and head coach Hollie Bonewit-Cron in the fall. “I got to know Hollie fairly well throughout the job search and gained a lot of respect for her philosophy of coaching and the person she is. I am very excited to work for a successful woman head coach like Hollie.” The NCAA All American concluded,  “I am excited to bring my experiences and skill sets to aid Hollie and staff to allow the program to excel.”

Hmm… Dan was working at Miami? Imagine that.

All these interviews sound exactly like what the last assistants said. They just gotta wait for the other shoe to drop with that one common denominator…

Everyone starts somewhere. Coaches should be given a chance to prove themselves for a season or two. One thing she does have is swimming experience!