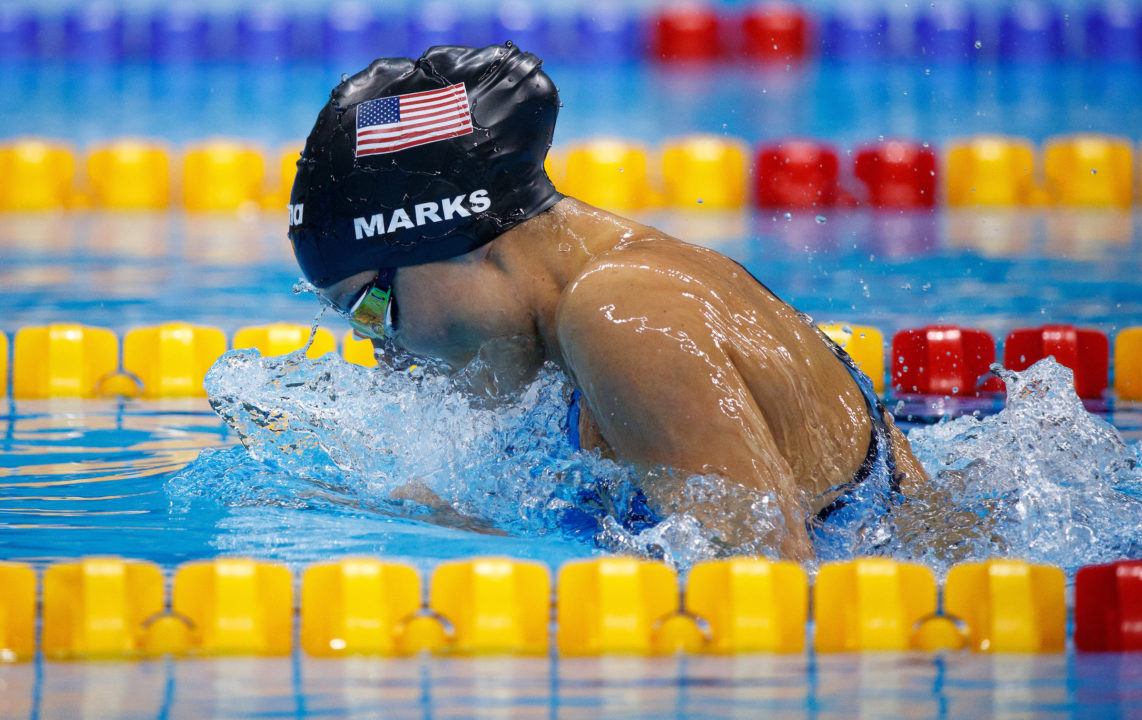 With a time putting her over four seconds ahead of second place, Marks received her first Paralympic medal. Long came in second, winning silver with a time of 1:32.94. The Netherlands’ Lisa den Braber took bronze with a time of 1:34.66.

Marks is an active-duty member of the US Army. She is one of four American active-duty soldiers competing in the Paralympic Games. In 2010 Marks was serving as a combat medic in Iraq where she suffered bilateral hip injuries. After undergoing three hip operations, she began swimming as part of her rehabilitation. She trained at the Brooke Army Medical Center in Fort Sam Houston, Texas.

At the 2016 Invictus Games, Marks won a total of four gold medals. She later gave one of the medals to Prince Harry, the founder of the Invictus Games. She asked him to present the medal to the Papworth Hospital-the hospital that saved her life during the 2014 Invictus Games.

According to the US Army, Marks is the first soldier in the US Army World Class Athlete Program to become a Paralympic swimmer (see full article here).

Every swimmer that competes in the Paralympics has their own story of how they received their disability and how they overcome challenges and obstacles to be able to compete at these Paralympic Games and Mark’s story is another incredible one. However everyone including the classifiers need to be reminded and comprehend that the classification system is ultimately in place to ensure fair play and a fair playing field. It’s not supposed to be a sympathy vote for who has the greatest story, it’s not supposed to be able to be manipulated by swimmers, coaches and countries to gain unfair advantage. It’s paramount that the classification system is accurate, fair, and accountable yet at the Rio Paralympics that is furthest from… Read more »

I completely agree with everything that you wrote. In Marks case, one of her exemptions is for “intent to touch,” with a bilateral hip injury. Enough is enough IPC. How in the world do these people get classified S10 then to an S8 or SB9 to an SB7. Marks trains at the OTC, at altitude, with no tapper at all. She does sprints at practice and does not use a tapper. I don’t doubt that a lung condition could effect her vision, but what happened that impaired her upper body? How is possible that she raced in late 2015 without assistance and tappers, but heading into Rio it’s a totally different story?

well written. It would take me a week write something that good. Did anyone notice that this swim meet is like 11 days long? Who has an 11 day swim meet? People are losing interest at day 5.

What people should know about Marks classification is that she dropped a lot of time after the 2014 incident but claims that the incident made her more limited in the pool. That doesnt add up. The things she claims to suffer from do not make one eligible for the paralympics such as being blinded from swimming fast. Reduced lung capacity…if that were allowed then all the asthmatic swimmers in the world would be in RIo right now and like half the world… Read more »

Has the list of medical issues eligible for the Paralympics expanded? In the physical it used to be amps and permanent disability. Now we find more and more medical illnesses included and taken into consideration by the IPC, that are treatable with medications to decrease symptoms and increase ability eg Asthma, Epilespy, Verdigo, Parkinson’s disease, Gillian bar syndrome and ms. No wonder the classifiers can’t get it right, talk about make the classification complex and complicated, they don’t have the medical specialist knowledge and expertise for such a broad range of medical conditions and how the treatments impact on the medical condition and symptoms.

And really do the classifiers even have any understanding of half the conditions they are classifying?
Pretty sure they do not even look at the medical documentation provided and I am certain they do not check the credentials of the supposed medical practitioners providing the information.
Not too hard to make up a report, write down a few random numbers for modified Ashworth scores, bung on a bit of a limp and a clenched hand and there you have it- whatever classification you like really.
The standard of examination performed by the classifiers is nothing short of pathetic and so open to manipulation its ridiculous.
Check for clonus on these late onset CP athletes for example-… Read more »

They asked us about taking botox injections to treat CP. They didnt just come up with that question on their own. They were told/trained to ask that specific question of a CP athlete. Where they really come up short is in their ability to observe the swimmer in the water test and make a proper determination on how much the claimed disability affects their swimming. They also need to do a better work up of the swimmers competitive history and compare it to the dates of their supposed medical trauma. It would be easy to call BS on many of the athletes claims such as Millward and Marks.

Marks is still a very average swimmer in freestyle, not much pull in the water because of a weak catch, but can completely kick a$& in breaststroke. Because she has 2 legs that have an impairment but can kick (watch her IM) and 2 completely functioning arms. If you can’t follow the rules of fair play and fair classifications, stick to the games and meets intended for wounded warriors. She is a great voice for the Invictus Games, and an example to other wounded warriors.

My guess is that Queenie Nichols pushed Marks through to be reclassified. The US has done little to build a strong swim program throughout the classes. Only Drake from the resident program has medaled,… Read more »

Para swimming is in need of a big time overhaul. Can start with the US and proceed O’Neill on down (and up if that helps!). IPC classification — JOKE. Marks in the same class as a swimmer without legs — yeah, that’s is a level playing field! And when did she ever need a tapper? What — now she is a VI athlete too. Pathetic! This is becoming a mockery for all the world to see.