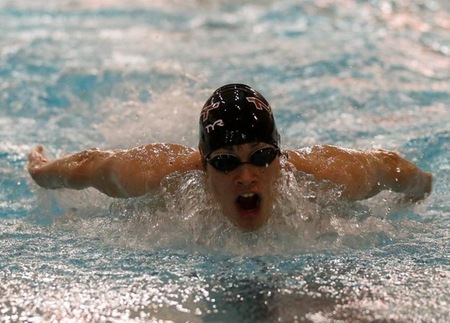 Bouke Edskes registered NCAA "B" cut times in both butterfly events and set the Samuelson-Muir Pool record in the 100-fly with his time of 48.60. Current photo via Brian Foley

– The Lead: Powered by three event wins by senior Bouke Edskes (Rockville, Md.), the No. 4 ranked MIT men’s swimming and diving team swept both No. 6 NYU and No. 11 Williams College in a double-dual meet that took place on Friday afternoon in Western Massachusetts.

– MIT’s “A” 200-free relay comprised of Chen, Liu, sophomore Nicholas Baginski (Hawthorn Woods, Ill.) and Ubellacker ended the meet on a high note as they won the event in a time of 1:23.43.

– MIT will travel to No. 13 Tufts University for a dual meet with its crosstown rivals tomorrow beginning at 1:00 pm. The Jumbos will host the swimming portion of the meet, while the diving will take place inside the Zesiger Sports and Fitness Center Pool on the campus of MIT at the same time.

How can someone compete in both swimming and diving events if the two are held concurrently in different places?