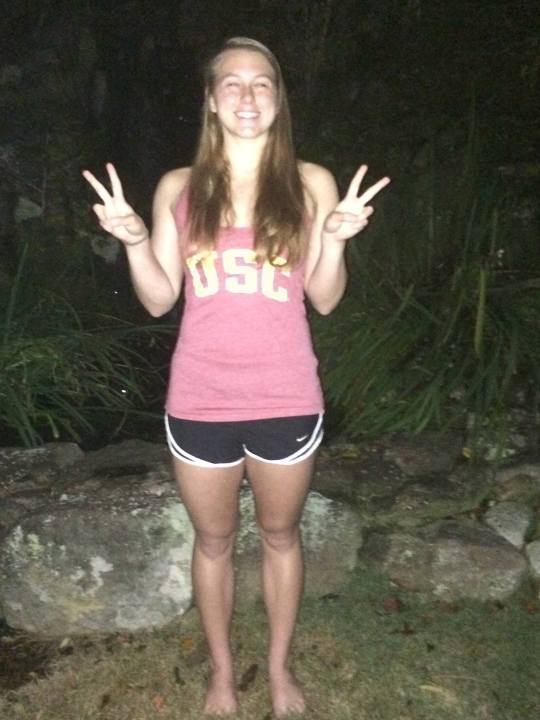 Katie Christy, a breaststroker/freestyler out of Georgia, has verbally committed to the USC Trojans. Current photo via Katie Christy

Christy will join her older sister Jamie Christy , who is currently a sophomore, in the Trojans’ breaststroke group.

Katie isn’t quite as good of a breaststroker as her older sister, but is a better sprint freestyler. She fits in a similar mold to former USC star Kasey Carlson, and USC post-grad swimmer Jessica Hardy, in her ability to cover both the breaststroke and sprint freestyle events.

“It felt like a family, literally,” Katie Christy said of why she chose the Trojans.”The campus is so pretty, they do some really interesting and creative things in practice, and (assistant coach) Jeremy Kipp makes really good pancakes.”

Christy specifically cited a Trojan practice where the team did “symphony kicks” that involves kicking along to a piece of a symphony, and when the music gets more intense, the swimmers are expected to match with their kicks. In softer and calmer portions, swimmers relax.

Katie Christy’s connection to the team isn’t just that her sister is a part of it, it also has to do with the success that her sister had there as a freshman. Jamie Christy didn’t go a best time in the 100 yard breaststroke as a junior or a senior in high school, and in her first year in Los Angeles improved her best time by a full second. to go 1:01.98.

Katie Christy, a senior at Westminster in Atlanta, is the two-time defending Georgia 1A-5 (small school) state champion in the 200 IM, and was the runner-up in the breaststroke in 2014 as well.