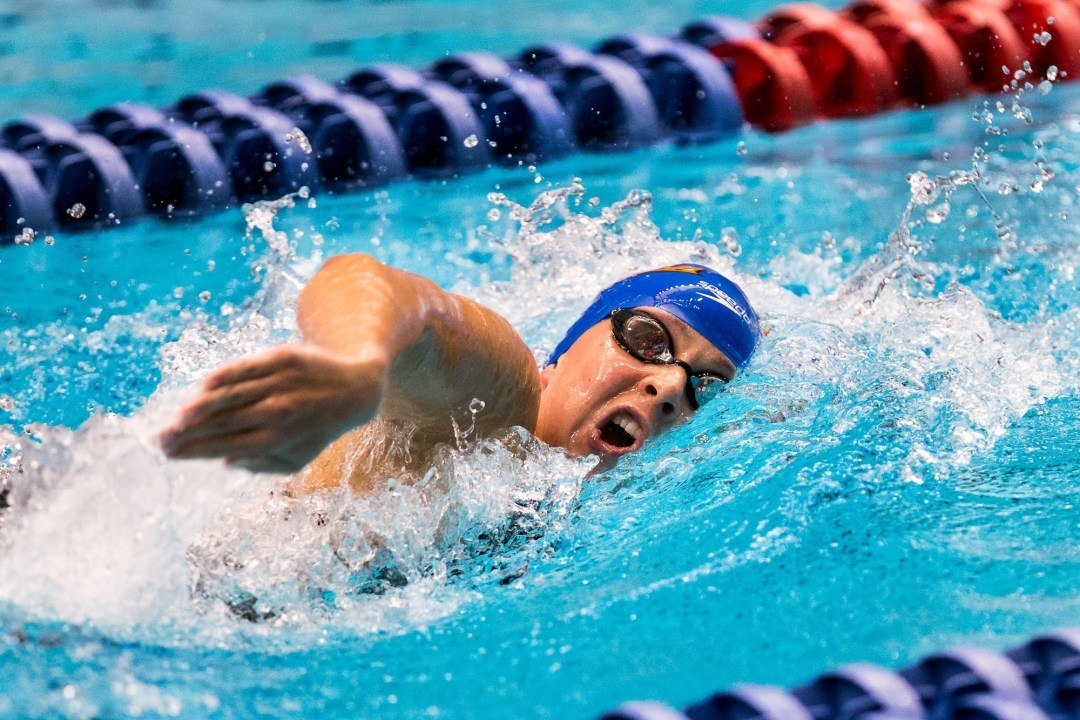 The Southeastern Conference (SEC) has released its weekly award winners for swimming & diving, with Florida coming out the best. The Gators picked up 3 of the 6 weekly awards including the female swimmer and diver of the week. Archive photo via Tim Binning/TheSwimPictures.com

The Southeastern Conference (SEC) has released its weekly award winners for swimming & diving, with Florida coming out the best. The Gators picked up 3 of the 6 weekly awards including the female swimmer and diver of the week.

These are the first weekly awards for the conference, so though they technically honor the best athletes of the given week, these awards do somewhat stretch back a couple of weeks for the teams that were in action early on.

Junior Gator Jessica Thielmann was named SEC Female Swimmer of the Week. The British distance specialist has looked great for Florida so far, winning events at each of Florida’s three meets so far. She took the 400 IM in a runaway win over Arkansas to open the season, then doubled up in the 500 and 1650 freestyles at the All-Florida Invite. Thielmann repeated that double individual feat against LSU over the weekend, going 4:49.02 to win the 500 free while also taking the 1000 to open the meet.

On the men’s side, it was Tennessee’s Sean Lehane picking up the Swimmer of the Week honor. Also a junior, Lehane has been a big part of the Vols effort so far this year. He won the 100 fly to open the season against UNC-Wilmington back in September. More recently, Lehane put together four wins over two meets last weekend, with outstanding times in all four. Lehane won the 200 free and 200 back against Queens Thursday night, then added the 100 back and 200 back against a tougher North Carolina squad the next day. His 100 back (48.23) and 200 back (1:44.37) were huge swims that rank him highly in the nation in the early goings of this season.

The Divers of the Week were Florida’s Kahlia Warner and Tennessee’s Maurico Robles. Both are juniors and both hail from outside the United States, with Warner coming from Australia and Robles Mexico. Warner has won 5 of her 6 diving events so far this year, sweeping Arkansas and the All-Florida Invite and winning on 1-meter against LSU. Robles has been diving extremely well for the Vols, coming within 6 points of a career-high on 3-meter against North Carolina. Robles’ previous career high was at last year’s SEC Championships, according to the conference’s awards announcement.

The freshmen of the week are both highly-touted names. Caeleb Dressel picked up the third award for Florida, and the first for the Gator men. Dressel already has multiple wins in his rookie season, winning the 100 fly at both of Florida’s meets on the men’s side (All-Florida Invite and the LSU dual), and he also cracked 20 seconds in the 50 free to win against LSU.

Kylie Stewart puts Georgia on the board with the Female Freshman of the Week award. Stewart, a native Georgian, got her first varsity win in the 200 free against Vanderbilt in September, and followed that up by sweeping the backstroke races against Alabama last Friday night. Her times were excellent for early October, as Stewart went 53.75 and 1:57.27 to sit near the top of the NCAA so far this season.