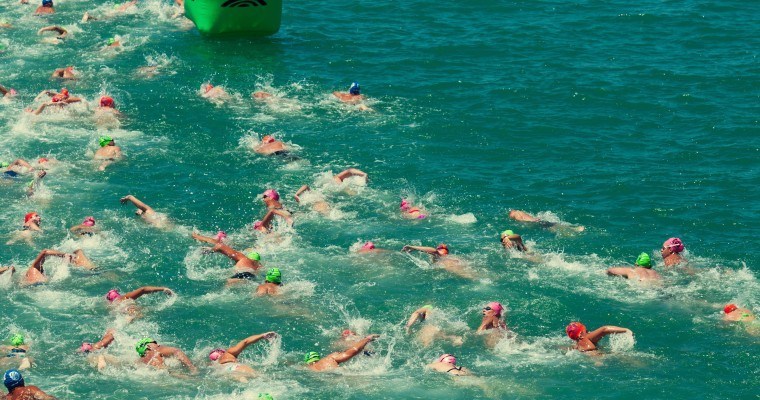 The Dutch are the early heroes of the 2014 European Championships in Berlin, Germany, and on Thursday morning they picked... Stock photo via Mike Lewis/Ola Vista Photography

The Dutch are the early heroes of the 2014 European Championships in Berlin, Germany, and on Thursday morning they picked up their second big gold medal of the event so far.

22-year old Ferry Weertman won the men’s 10km title in 1:49:56.2. While the finish was significantly more competitive than the men’s 5km race on Wednesday, where Daniel Fogg was easily away from the field by the time he touched – a three-second gap isn’t an out-touch either.

Weertman, as we saw Sharon van Rouwnedaal do in the women’s 10km a day earlier, was content to hang at the back of the lead pack for the first three laps. The gap of a few body lengths with 2 kilometers to go is almost meaningless, and so Weertman had conserved his energy for a big last lap.

Lurz was not only the lone male swimmer to medal in both the 5k and 10k in two days, he was the only 5k medalist to even attempt this 10k. But for Lurz, the second-oldest competitor in the field, these first two events are a mere warm-up for the 25km race  that has become his specialty later in his career.

The two-time defending World Champion in this event, Spyridon Gianniotis from Greece, was just 8th in 1:50:05.1.

Now, a country best known for the history of their legendary sprint group, has won both of the premier open water 10km races at these European Championships, exploding stereotypes.

German Women Bounce Back in 5K

In the women’s 5k, the German hosts got their first gold medal of these championships, thanks to Isabelle Haerle’s victory.

Haerle swam a 57:55.7 to dominate the field, beating yesterday’s 10k champion Sharon van Rouwendaal by 34 seconds. After the Germans failed to put anybody in the top 12 in the women’s 10k, Haerle rose to the challenge on Thursday.