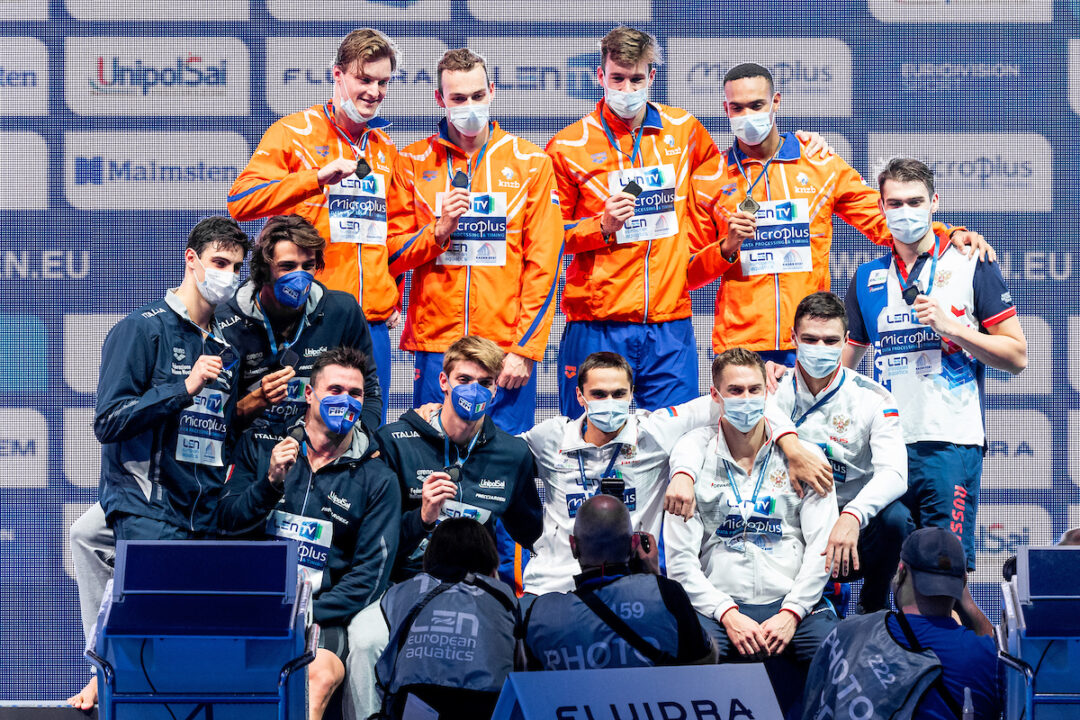 Hear what the Netherlands' winning men's 4x50m free relay had to say after denying Italy and Russia on day 1 of the 2021 European Short Course Championships. Current photo via Giorgio Scala / Deepbluemedia / Insidefoto

Day 1 of the 2021 European Short Course Championships belonged to Team Netherlands, as the Dutchmen hit it big with double gold.

After the race, Kroon stated,  “I feel really good, this is the first international short-course competition of my career. I came here with big goals and after the prelims I saw my time and thought maybe I could get a medal. So I’m very
happy that I did.”

Kroon narrowly defeated a pair of Italians in Matteo Ciampi and Marco de Tullio, who both hit the wall less than half a second later. Ciampi settled for silver in 3:38.58 while de Tullion rounded out the top 3 in 3:38.80.

For his effort, Ciampi stated post-race, “It’s a very nice birthday gift for me. I’m satisfied, though I wanted to win. But at the end the second place is OK. For me, it is important to get an individual medal at an international competition. This is a good incentive that I’m on the right way. Towards the end of the race, I regained my good energies.”

De Tullio echoed the sentiment, saying of his bronze, “I’m very happy with the result. I have regained the desire for swimming as the Olympics went really bad.

“Afterwards I made a lot of changes. I changed the coach and the club. I would like to thank everyone, the whole staff for supporting me and making me a better swimmer. For me, it’s a great feeling to look forward to not just racing but also training. And of course, this was a great start for the championships.”

Also in the gold column for the Dutch was the men’s 4x50m free relay, with the squad of Jesse Puts, Stan Pijnenburg, Kenzo Simons and Thom de Boer putting up the 4th fastest time ever in the event. Clocking 1:22.89, the Dutch took gold and established a new national record in the process.

As for his performance, Puts said, “The race was awesome, it was my first swim here so to become a European champion right away is incredible. I swam the first leg, it was fine, I can go faster but that was all I could give
today though all worked up at the end.”

His teammate Simons said, “It feels really great. This is my first European Short-course Championships and to win
this title with the team is incredible. It’s just a very good feeling overall. I have two more races here so
this is a fine start for this meet.”

On earning bronze, Evgeny Rylov candidly commented,  “I’m not satisfied with my split. I need to improve my racing as I didn’t have any competitions since the Olympics.”

Rylov split 20.99 as the 3rd leg of the Russian team, posting the 3rd fastest split of the field for that component.