Dressel Shaves Another 0.01 Off Textile Best, 4th-Fastest 100 Fly Ever 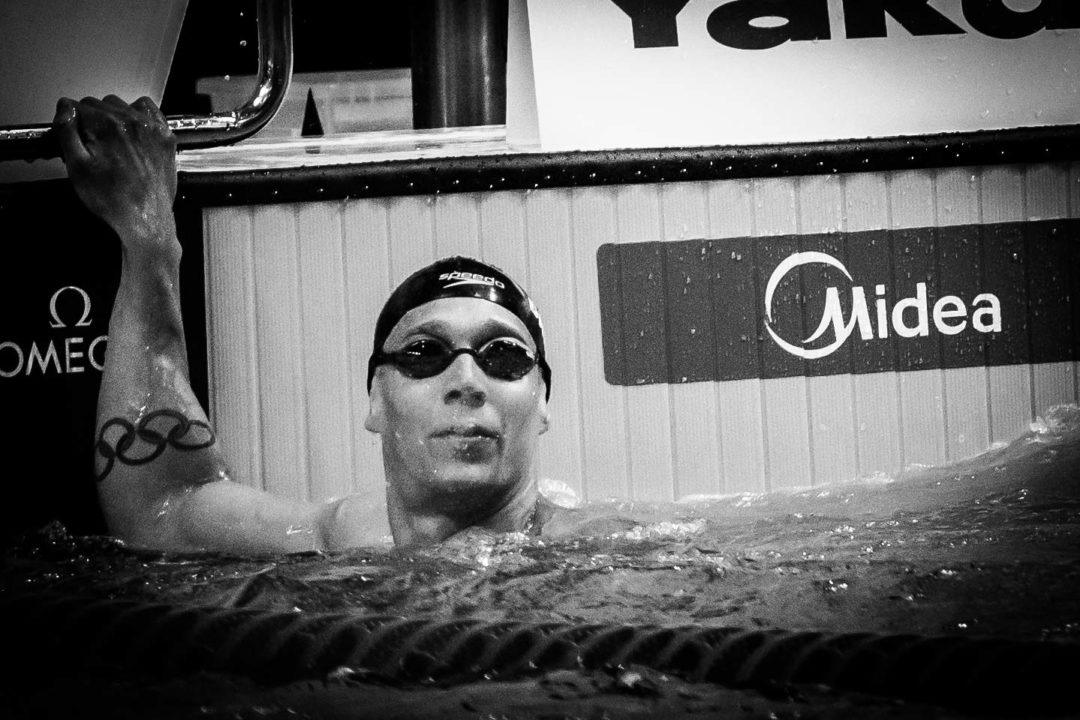 Caeleb Dressel threw down another 50.0 this evening in Budapest, once again setting a textile world record for the 100 fly.

American sprint sensation Caeleb Dressel dropped another one-hundreth of a second off his textile world record tonight, swimming a 50.07 to take the top seed in the 100 fly heading into tomorrow night’s final.

That was Dressel’s fourth swim of the day.  This morning, he took the 2nd seed in the 50 free, then knocked out a 50.08 in the 100 fly, a textile world record that was the 4th-fastest swim ever and made Dressel the 3rd-fastest performer ever.  Tonight, Dressel set a new American Record in the 50 free, then had about 30 minutes to recover before it was time for the 100 fly semis.

By shaving 0.01 seconds off of this morning’s time, Dressel is still the 3rd-fastest performer ever, but now owns both the 4th and 5th swiftest swims.   He’s now gone under 50.2 more times than Michael Phelps ever did, with Phelps’ only such swim being his world record effort of 49.82, at the supersuited 2009 World Championshps.  Phelps’ chief rival at that meet, Milorad Cavic, dipped under 50.2 twice, first when he went 50.01 to break the world record in semis, then again when he finished second to Phelps with a 49.95 in the final.

Tomorrow night Dressel will face off against his former club teammate, Joseph Schooling of Singapore, who previously had the fastest swim in a textile suit with his 50.39 from last summer’s Olympic final.

What does “textile” mean?

swimmer1 – basically, not a primarily rubber/non-permeable suit, like the suits from the 2008/2009 time frame

The 50.07 was actually slightly worse than the 50.08 overall. Not as smooth or dominant. The turn was almost identical but he hit the finish much better, accounting for the quicker time.

I don’t think Phelps’ record falls. That’s still another quarter second. The calls for 49.5 may sound cute but after living in Las Vegas for 25 years I’m aware of betting lines and probability. That 49.5 would be so far below the posted over/under that you’d probably receive 25/1 in return. If Dressel drops his best time again I’ll say barely, like 50.02 territory.

As a lifelong Canes fan I despise the Gators. That needs to be front and center. For some reason I can set it aside… Read more »

I think it might come down to how well Dressel does in the 50 free. If he wins, then that’ll probably give him that adrenaline to push an enormous 100 fly. Kind of like how Ledecky did better in the 200 semifinal after her 1500 than in the 200 final.

I think Schooling goes faster as well. While his times may not be considered impressive relative to Dressel’s, it was what he needed to win his race. Whereas James Guy and Milak were fast due to Dressel’s speed. I’m sure he will go faster in the final but whether or not he has the speed to match Dressel’s remains to be seen, but he does have a chance. Schooling has not lost a long course 100 fly since 2015 worlds, and like Eddie says, Joe won’t let anyone pass him. Admittedly, it’s gonna be tough (even Joe said so himself), but its anyone’s race tonight

I’m a Dressel fan but I wouldn’t mind Schooling winning. To see him on top the podium after a not so good year would be great

Alright.. i think i was a bit disturbed by some Dressel’s fans who keeps pulling him down. But there are definitely very sensible fans there. In my opinion, Dressel has higher chance to win the title. 2017 is an adjustment year for Schooling. He will be in better form next yr.

It’s funny how if either Joe or Caeleb win it’ll both be considered somewhat an upset. If Joe wins he upsets someone who’s been putting up extraordinary times, even eclipsing his textile record, and If Caeleb wins he upsets the defending Olympic Champion and presumptive favourite before the heats

Haha.. 2 gold medalists will be phenomenal. Bolles kids standing on the top of podium. Lol

Also, if anyone else other than these two win, it’ll be an even bigger upset, so no matter what, whoever wins this race will upset someone

I wouldn’t count Schooling out just yet. He races to win and he has already announced his intention to break Phelps’ WR (although he did tell his interviewers that Dressel’s probably gonna take it down), but it’s all about who can bring their A Game tomorrow, and Schooling does have a ton of credit for delivering big swims on the international stage. I wouldn’t be surprised if both Joseph and Caeleb go under 50

Like how Sjorstrom was expected to easily win after setting the world record earlier, but in the end got beat by Manuel, I think the 100fly could go either way, but will be a close one for sure

I’m already sad that tomorrow one of hystorical WR by The GOAT will be gone.

I think you are spot on. Amazing meet for Dressel. However, he was just as consistent at the NCAAs. Not one poor finals race, even with a brutal schedule, including tons of relays.

0
0
Reply
the shark
Reply to  Swimmer?

my prediction in the podium: schooling, cseh, methella

my prediction in the podium: schooling, cseh, methella

3
-10
Reply
NotASwimmer
Reply to  the shark

Anything can happen, but since this is a 100m race he has a little bit more room for error than in the 50.

4
0
Reply
Caleb
Reply to  the shark

Unless he slips all the way and breaks his leg, he’s landing on the podium.