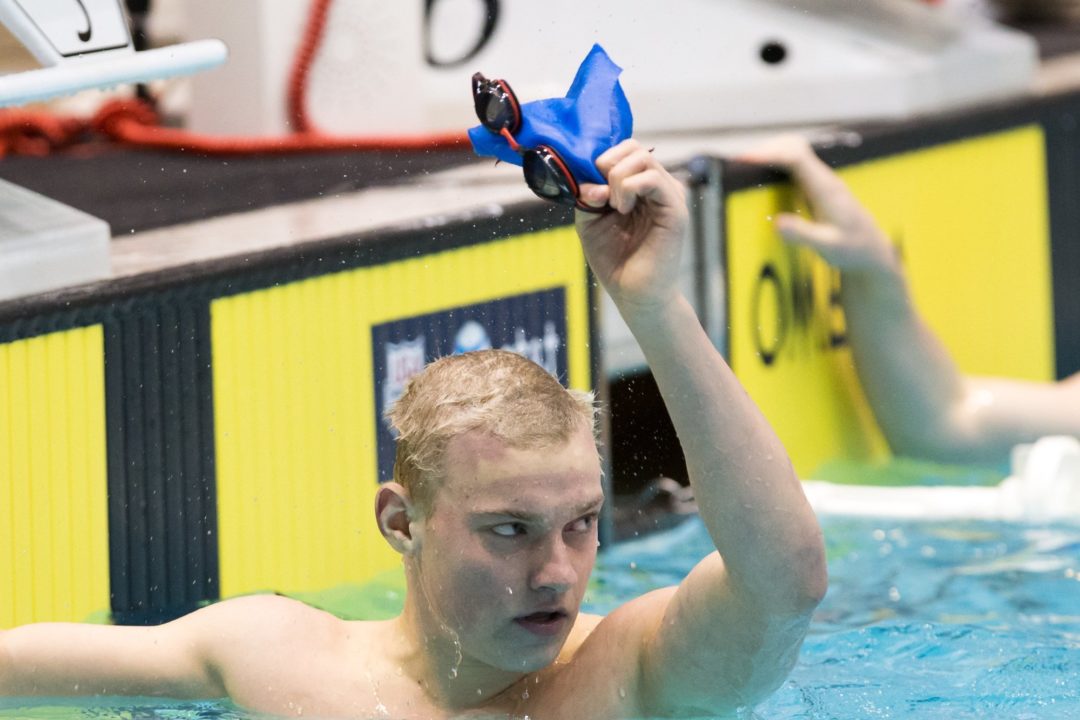 Andrew Seliskar won two races, including a 1:52.21 NAG record in the 200 breast, while Michael Andrew broke two NAGs of his own on Friday night. Archive photo via Tim Binning/TheSwimPictures.com

Michael Andrew took down a pair of National Age Group records and Andrew Seliskar blazed to an outstanding 1:52.21 NAG record-breaking win of his own in the 200 breast, highlighting Friday night’s action at NCSA Junior Nationals in Orlando Florida.

Our prelims recap is here.

As the Georgia women lead the NCAA Championships up north in Minneapolis, Georgia-bound Kylie Stewart won another event at NCSA Juniors at the southern end of the country. The 17-year-old Stewart went 51.96 to win a tight battle with top-seeded Beata Nelson of Wisconsin. Nelson broke 53 for the first time this morning and nearly broke 52 at night, going 52.03. At 15-years-old, Nelson now looks like a threat to break the 15-16 NAG record held by Olympian Rachel Bootsma at 51.53.

NCAP’s Janet Hu took third, just behind in 52.20. SwimAtlanta’s Megan Bestor was fourth with a 52.60. A pair of Minnesotans came in next: Zoe Avestruz of the Aquajets and St. Croix’s Mickayla Hinkle. Saint Andrews’ Megan Moroney and NCAP’s Carrie Boone rounded out the championship final.

Baylor’s Luke Kaliszak held onto his top seed in a field where almost every swimmer dropped time at finals. Kaliszak went 46.47, dropping another half-second after breaking 47 for the first time in his career at prelims. That was enough to easily hold off NCAP’s Andrew Seliskar, who took second in 46.89.

Kaliszak’s Baylor teammate Sam McHugh was 47.78, just nipping Michael Andrew for third. Andrew was 47.83 to break his own National Age Group record for 13-14s and become the youngest swimmer under 48 seconds in the 100 back.

Another top seed dropped big time to hold on for the win in the girls 500 free. Sydney Lofquist of the Mason Manta Rays went 4:42.28. She held off Dynamo’s Kylie Stewart – Stewart went 4:42.75 for second.

City of Mobile Swim Association’s Paige Madden went 4:43.26, dropping over five seconds off her prelims swim to take third. The youngest swimmer in the A final was right on her heels, though – Isabella Rongione went 4:43.40 for fourth place.

Distance-man Townley Haas showed some speed in winning the 100 free. The NOVA of Virginia product went 43.82 to top some big sprinting names including James Jones of NCAP (2nd, 43.97) and Justin Plaschka of Team Suffolk (3rd,, 44.11).

Palm Harbor Y’s Tristan Sanders has been most notable for his backstroking this weekend, but he took fourth here in a nice 44.22. Michigan Lakeshore Aquatics Tabahn Afrik (44.58) and Dynamo’s Knox Auerbach (44.58) came in close together and Nicholas Bigot and Ryan Nicholson rounded out the champ final.

Marin Pirates 16-year-old Riley Scott chopped another second off her lifetime-best to win in 2:11.18. That was a runaway win, over two seconds ahead of the rest of the field. There was a spirited battle for second, with Cougar Aquatic Team’s Meaghan O’Donnell coming from behind to touch out Ozaukee’s Katherine Drabot 2:13.12 to 2:13.21. Just behind was Pauline Kaminski of the Academy Bullets in 2:13.99.

NCAP’s Andrew Seliskar ran away with the boys event, going 1:52.21 and breaking the 17-18 NAG record belonging to Kevin Cordes. His teammate Carsten Vissering took second in 1:55.44, dropping a second off his lifetime-best and closing in on the 15-16 NAG record Seliskar left behind at 1:54.87.

NCAP’s Janet Hu picked up another win for the week, taking the 100 fly in 52.00 to complete a sweep of the butterfly events for the NCSA meet. That’s not quite her lifetime-best but still was enough to beat the field by half a second.

Wisconsin’s Beata Nelson took second in 52.49, just about four tenths off her own 15-16 NAG record.

There was a bit of a dropoff from there, but the next three swimmers put on an exciting show, finishing within a tenth of one another. 14-year-old NCAP-er Cassidy Bayer went 53.30, breaking Nelson’s 13-14 National Age Group record and taking third. Simone Manuel was just behind in 53.34 for First Colony, and SwimAtlanta’s Megan Bestor went 53.36 for fifth.

Andrew Seliskar made it three in a row for NCAP, continuing to cut time off his lifetime best with a 46.50, his first time under 47 seconds and a runaway win. Michael Andrew was second, taking down his second NAG of the night with a 47.40.

Just behind Andrew was Dynamo’s Gunnar Bentz, who went 47.56 for third place. That top three was pretty well checked out from the field as the whole rest of the top 8 was in the 48s.

Sam McHugh led that crew for Baylor, going 48.24 and taking fourth. Steven Tan of Delta was 48.39, a tenth ahead of Team Suffolk’s Justin Plaschka (48.49). Ryan Nicholson of the Syracuse Chargers took seventh and Ben Kennedy was eighth for Carter Center Aquatics.

Full results are available here or on Meet Mobile under “2014 NCSA Spring Championship.”

It looks like butterfly is the best stroke of Janet Hu.
Her best times on butterfly.
23.40 in the 50
51.76 in the 100
1.52.92 in the 200
It’s still early but what could be her schedule at Stanford?
I think 50 free or 200 IM on day 1, 100 fly on day 2 and 200 fly on day 3.
And about medley relays, she would be more efficient on the butterfly legs. They will have Ally Howe on backstroke. And with Katie Olsen or Heidi Poppe on breaststroke and Simone Manuel on freestyle, they look unbeatable.
I don’t even talk about the freestyle relays! 🙂
Lindsey Engel/Maddy Schaefer/Janet Hu/Lia Neal/Julia Anderson/Nicole Stafford/Alexandra Meyers/Simone Manuel! 😯

Ready for the final day.
I can’t wait to watch several swims.