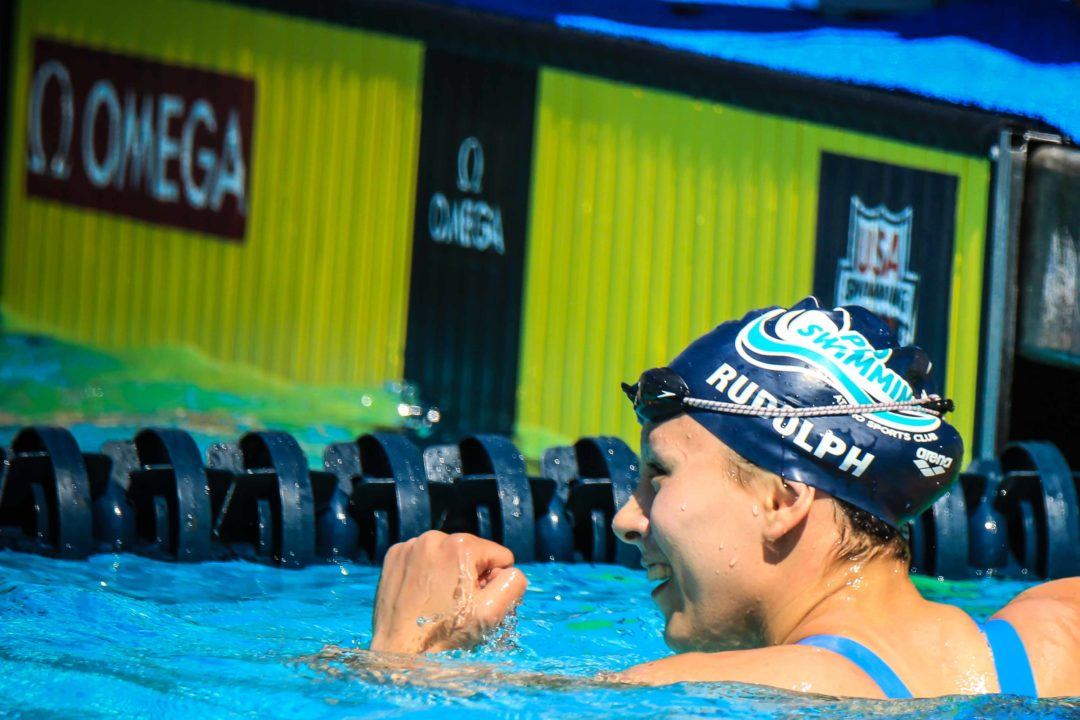 In a weekend overshadowed by the ISL, high school senior Janelle Rudolph came up with a huge relay split in leading Bellevue to a Washington 3A state title. Archive photo via Jack Spitser/Spitser Photography

In a weekend overshadowed by International Swimming League and other international meets, Washington high school senior Janelle Rudolph came up with a massive relay split in leading her Bellevue team to a Washington 3A state title.

Rudolph went 47.77 on the anchor leg of Bellevue’s 400 freestyle relay. That was the fastest split in the field by almost four seconds, and is a split that would fit right in at the college level.

Rudolph’s lifetime-best in the event is 48.93, set last March. She didn’t swim the 100 free individually at Washington State, opting instead for the 50 free (she won in a career-best 22.36) and 100 back (she won with a career-best 52.90). But the relay showed she’s in line for a big drop there whenever she does swim the event with some rest.

Rudolph will attend Stanford next fall. She joins a Stanford program that has recruited extremely well, but has also lost talents like Katie Ledecky, Simone Manuel, Ella Eastin and Taylor Ruck to graduation, red-shirt seasons and the professional realm. And as new faces have to step up for Stanford, Rudolph could project as an immediate-impact relay swimmer – something pretty rare for the top teams in the country.

Last year at NCAAs, Stanford only had two splits faster than Rudolph’s on their finals 400 free relay. Ruck split 45.6 and Eastin 47.5. Both are gone this year, though Ruck could come back next year after red-shirting this year in preparation for the Olympics. Even if she doesn’t make the Stanford relay as a freshman, Rudolph could be one of the better freshmen sprinters in the nation. Her time would have improved every team in last year’s NCAA final outside of national record-setters Cal and runners-up Michigan.

Wow, congratulations! Excited to see what she will do at Stanford!