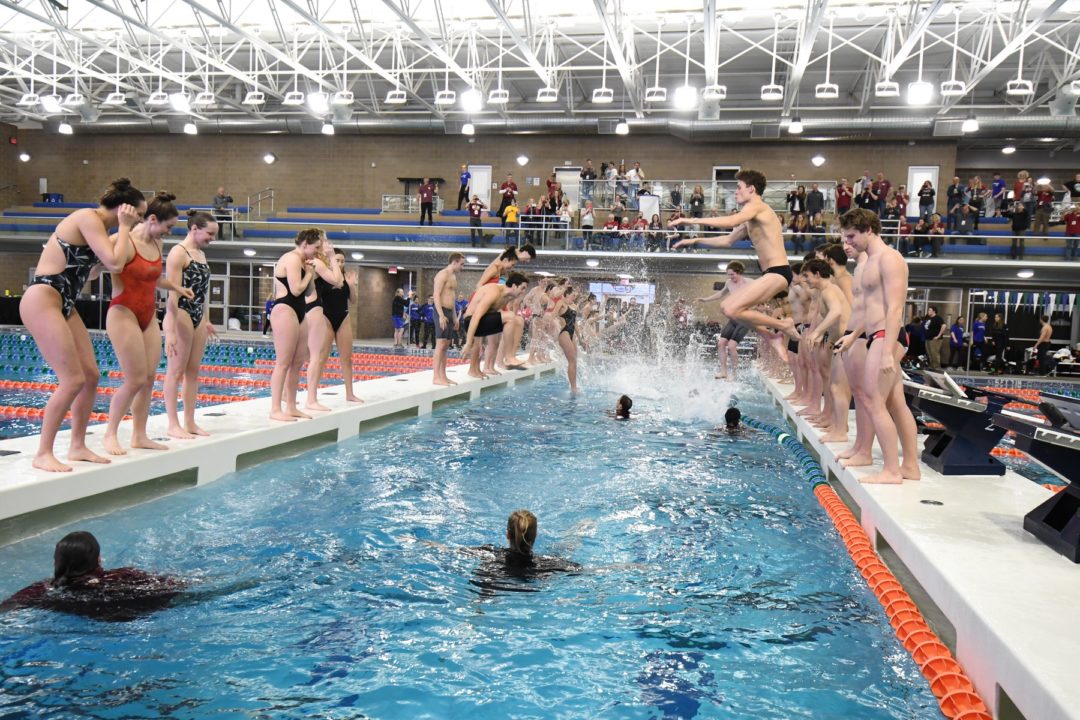 The University of Denver women's team won nearly every event on day 1 of the Summit League Championships, getting off to an early lead in the team standings. Stock photo via Summit League

Following extensive fundraising efforts for the program and it’s alumni, the La Salle men’s swimming and diving team has been reinstated for 2021-2022.

Missouri State’s Anna Miller highlights the team as the Scholar-Athlete of the Year.

Ray Riordon, the founder of the varsity swim team at Towson University, died on Saturday at his home in Millsboro,…

Breaststroke specialist Brianna Cottingham has verbally committed to swim for UNC Asheville’s beginning in the 2022-2023 season.

Racing began at the men’s and women’s 2021 Summit League Swimming and Diving Championships in West Fargo, North Dakota on April 15, 2021. The University of Denver got off to a quick start on day 1, collecting nearly every gold medal of the session while the University of South Dakota secured a lead on the men’s side.

That lead by South Dakota is significant, as the Denver men have been the overwhelming force n the conference since Oakland left after the 2012-2013 championship. In fact, the Denver men have won 7 straight Summit League titles, and last year they won all-but-one of the conference titles in swimming (the 100 IM, where they didn’t enter any swimmers) to take the team title by almost 400 points.

A number of Denver’s stars, even those with eligibility remaining, are not competing at this meet and are no longer on Denver’s roster, though. That includes names like NCAA All-American Cameron Auchinachie.

In the women’s 500 freestyle Angie Lindsay got within a few seconds off her 4:53.39 PB from back in 2019. Lindsay’s win for the University of Denver was a second faster than teammate Sofia Nosack‘s 4:58.78 for silver. Izzy Smith ensured a Denver sweep in the event with a swim of 5:00.93.

The University of Denver picked up another gold medal in the 100 butterfly as Ines Marin raced to a 55.48, establishing a new best time by 0.48, improving upon her 55.88 from back in February. Marin’s teammate Eri Remington followed with a 56.05 silver medal swim and Kristen David was bronze for South Dakota State in a 56.36.

Remington was back later in the session to race the 50 freestyle and wound up taking gold with her 23.08. Aysia Leckie was silver for the University of Denver, posting a 23.13 while Elisabeth Timmer gave South Dakota State another bronze in a 23.46.

The University of South Dakota women collected their sole win of the session in the 1-meter dive as Stella Fairbanks scored 265.20 points. Olivia Gordon was silver for the University of Denver with 261.75 as Quincee Simonson scored 261.50 points to earn bronze.

Mads Rishoj was the first individual winner on the men’s side as he took 500 freestyle gold with a 4:26.86, shaving 4 seconds off his entry time of 4:26.86. The University of Denver’s Riley Babson came in right behind teammate Rishoj with a 4:27.26 silver medal and Jacob Won earned silver for the University of South Dakota with a 4:37.23.

In the 200 IM, South Dakota State picked up their first win as Cayden Christianson swam a 1:50.27, more than a second faster than Miguel Turcios‘ 1:51.28 swim for Eastern Illinois. Both of those swims were quicker than their respective entry times as Christianson went in with a 1:50.88 and Turcios a 1:53.67. Jacob Leichner rounded out the top 3 in a 1:52.12 for the University of South Dakota.

Finally, Zach Kopp collected another individual win for the University of South Dakota, hitting a 20.40 50 freestyle. That was quicker than teammate Cooper Fuchs who was a 20.47 and Scott House who rounded out the top 3 with a 20.51 for Eastern Illinois.

Was there ever any word on what happened with Cam Auchinachie and DU’s other high end talent this season? Were they kicked off team, leave DU, shut down season for Covid, etc.?

Didn’t a bunch of seniors get caught for partying earlier this year?

yeah, heard about the covid party(ies), and at time it was suspensions for rest of academic quarter. Guess I’m wondering if those suspensions turned into something else/more.

I think everyone was mad because of the drama around the party. From what I understand the only people at the part were swimmers and someone on the team called the cops on them. So 40ish swimmers were suspended and because of this a lot of the remaining seniors decided to opt out of the season.

OK, thanks for the info. If you know, do the underclassmen intend to return next year? Feel like they had a really good breaststroker that was a soph or junior this year.

Hard to trust your teammates again if that was the case.

How sad the Cameron Auchinachie and all the other high end talent left the team and didn’t want to finish their senior year, that doesn’t say a lot for the coaching staff or the program at DU. How do you go from a top 20 program to losing most of your roster? I don’t think this can be blamed on Covid, even though that’s what they might want everyone to believe. Hmmmm???

Lol you break the rules, get caught, punished, quit, and then run to the internet to blame THE COACHES?

I think maybe now we see why the athletes thought it was okay to break the rules in the first place….#entitlement

The kids followed the rules laid out by the school. From what I’ve heard the school went back on what they previously said to try and make an example of the kids.

Not the case. How can you have a few friends over, then be called a party? Yet, the university has a gathering(protest, not swim related) and nobody’s wears mask with no consequences?

Yes a rule was broken and there should be some punishments for it I agree. But the severity of how badly the situation was handled was absolutely terrible. It’s not just the coaches. The people above them like the athletic director and the chancellor have handled it poorly.
There have been plenty of swim teams across the nation that had parties and gotten plenty of covid cases to occur because of it which led to being out of the pool for weeks (DU’s didn’t have any covid cases. Funny huh?), but no one hears about it because the coaches and the school handled it maturely.
Mistakes are made and the coaches did a terrible job guiding the team… Read more »

Try getting all the fact before making the statement of entitlement. This was a simple case of DU trying to be COVID safe and presented with 38 HONEST athletes who admitted being together. Ironically and KARMA the 1 swimmer who lied about being present, and saved from the punishment, has recently tested positive for COVID, broke his quarantine to go visit others and is not at Conference. Wonder what DU and this Coaching staff will do about him!

Don’t throw stones at the swimmers, someone should probably look into how many rules DU have broken during this process.

Unfortunately due to the lack of leadership at the coaching and AD level, these kids were taken advantage of and had no support from the coaches. If you dive deep, it’s not anywhere near what it seemed to the outside. The coaches crapped on the kids, especially the Men’s team. The whole coaching staff should be relieved of their position. There was also a non hazing incident where again the school and coaches blew it out of proportion, hence the coach leaving. They are to blame for DU woes. They took a Top 20 program to the basement.

Interesting that Adriel Sanes got kicked off the team early in the season but was entered in the 50 free and is not even on the roster. He was unsurprisingly a No Show during the event. Looks like they entered him to have just enough guys to score at the meet. Hope that doesn’t affect his eligibility or transfer to a different institution.

Denver men’s team really got screwed over by poor leadership. The coaching staff saved their own asses by suspending a handful of guys for the remainder of the academic term. After that, anybody that questioned leadership got axed too. Cam opted not to swim for the current coaches even though they specifically asked him to come back.… Read more »

Certainly something to look into. I wouldn’t put it past this program to cheat their way into having a scoring men’s team.

Honestly reading all the comments, I really want to know what happened. All i saw was the swimswam article a couple months ago and nothing much was said after that

@Swimmer
So you know about the gathering and the suspensions that were distributed. Now for what happened afterwards. The coaches decided to have individual zoom calls with everyone, but they did all the talking and didn’t bother to let the swimmers explain themselves, leading for the athletes to be upset with the coaches right away. With the swimmers who lived at the house that the gathering was at, the head coach thought the swimmers were entitled to do whatever they wanted and that they’re above the DU administration and the coaches. The head coach let those false thoughts consume her and ultimately led her to make the poor decision of releasing those swimmers. One swimmer, who was a known… Read more »