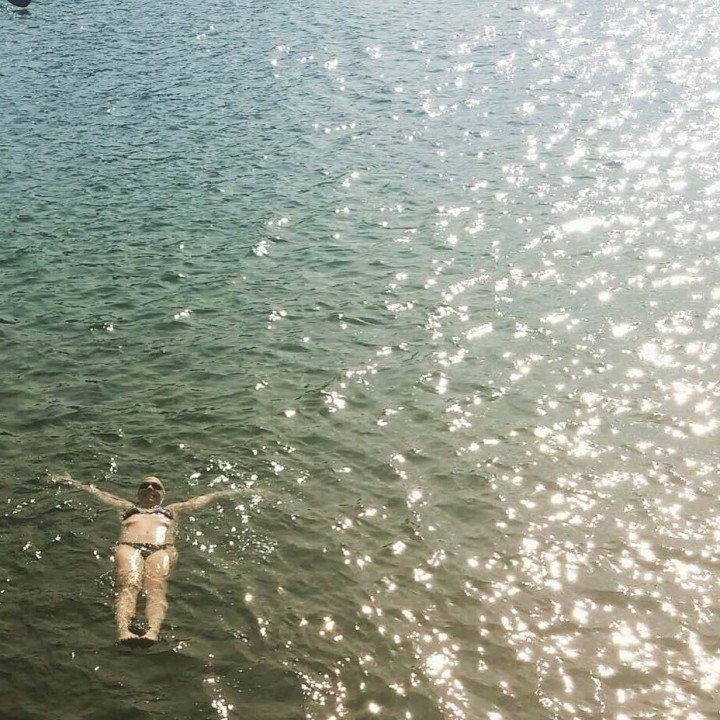 Courtesy of Claire Forrest Delia Salomon decided she wanted to swim the English Channel in eighth grade, after completing a...

Delia Salomon decided she wanted to swim the English Channel in eighth grade, after completing a book report on Lynne Cox’s Swimming to Antarctica: Tales of a Long-Distance Swimmer.

“I had done a few open water swims, but nothing long, and not much training,” she explained. “I just read the book and thought, ‘I want to do that.’” She began researching, and eventually, her training. “My parents were very supportive,” she says, “They didn’t try to talk me out of it. They just let me do my thing.”

When she was sixteen, she made the trip to England, but was prevented from being able to swim during her designated tide window. When a last-minute opportunity to swim occurred, she decided attempt a crossing. After swimming for eleven hours, 10-foot waves caused her pilot to declare it too dangerous for her to continue. She could see the lights of the France shoreline faintly in the distance.

She later learned that no one who swam that same day was able to finish. “While that’s slightly comforting, I was still very upset,” she admits.

Now, 7 years later, with a degree and four years of collegiate swimming from Grinnell College under her belt, Salomon is ready to conquer the 21-mile swim from England to France this September.

“I knew the minute that I got pulled out that I would have to do it again. It has been on my mind mind pretty much every day since August 15, 2008. But I’m old enough now to understand the magnitude of what I’m doing. I have a lot more experience with both swimming and knowing myself, and I understand what it’s going to take. There are more mental blocks and frustrations now, because I’m not a kid anymore. But I know better now how to get over those when they happen.”

But through it all, she’s having fun. Delia is the type of person to bring fun and lightheartedness to any situation. When asked to describe her swim, she opted to use emojis.

When asked what she does the night before a race, she admitted freely, “Mostly I watch The Mindy Project, but since it’s on hiatus I’ve resorted to watching other things, most recently Broad City and Unbreakable Kimmy Schmidt.” The latter actually provided her with a training mantra. “I sing the theme song in my head when I swim…because females are strong as hell.”

Strong as hell she is. After graduating college in 2014, Delia moved back home to the San Francisco Bay Area. She is a member of the South End Rowing Club, where she has met many other avid open water swimming training buddies. She swims twice a week in the pool with a master’s team, but avoids heavy yardage, as she believes it wasteful, instead focusing on technique and efficiency. The other four days she spends in the Bay with her club, with lifting and core exercises three times per week. When available, her family uses kayaks to row alongside her, mimicking the similar guidance she will have in the Channel. She empathizes the importance of taking one day off each week. Her recent training swims include a 14 mile, 5 hour swim from Candlestick Park to Anita Rock to Aquatic Park, several Alcatraz swims, a Golden Gate Bridge crossing, and some other shorter fun swims with her club members. She also just completed her 6-hour qualifying swim. She swam a round trip circumnavigation of Angel Island. She was the fifth person to complete the swim in her club’s history. It took 7 hours to swim 14.2 miles, showing how much a current can affect you!

Most would consider training its own full-time job, but Salomon is spending this year working full-time for the SF Day Labor and Women’s Collective, doing job dispatch and fighting for labor rights, as part of the Lutheran Volunteer Corps. “At first, I was overwhelmed,” she says, of taking on this position, which requires half her time spent communicating in Spanish. “But now I am glad for it, as it provides the balance between swimming and life. My job is demanding, but my boss has been super supportive of my goal to swim the Channel.”

Her swim also includes a platform for social justice. Swimming the English Channel is an $11,000 venture, and Delia has decided that any money she raises past that mark will be donated to the National Alliance of Mental Illness—San Francisco.

“We all need to be more aware of mental health,” she urges. “I have my own personal struggles with it, and so do some of my friends and loved ones. I think this swim—and the sport of competitive swimming—has such a mental component, and we should all learn to talk about it. When I first struggled with depression, I didn’t have the language or framework to describe how I felt. Athletes spend a lot of time working on our physical wellness; we know how to deal with colds or what to do for taking care of a hurt shoulder, and we deal with those early signs of pain. But inside and outside of athletics, you never learn the symptoms of mental health until you either experience it yourself or see someone close to you struggle. I want to raise awareness on how to support one another and end the stigma surrounding it.”

It’s clear that Delia has a lot of people supporting her, including her idol, Lynne Cox. “Meeting her was amazing. She was totally engaged when speaking to me. And really made me feel listened to.”

Cox also passed on an important lesson: to trust your pilot.

“I had always felt a little bad about being pulled out of the water and people had always been like, ‘Why didn’t you just refuse to get out and keep swimming?’ And I had always wondered that. Lynne said to me ‘I fully trust [my pilot], and you did the best that you could and it wasn’t your fault.’ And that was really important for me to hear and to accept that. “

Looking back, Delia says, “When I didn’t finish the first time, I was devastated, because it never occurred to me that I wouldn’t, and I really thought it was because I ‘wasn’t enough.’”

Looking forward, she’s a different person. “Swimming the Channel has become a way of learning how to be myself and tackle hard things but also be gentle and kind to myself at the same time.”

To put it simply: “I’ve just gotta make it across.”

Delia Salomon’s tide window is September 4-12, 2015. To donate to her efforts and the National Alliance of Mental Health—San Francisco, visit: http://www.gofundme.com/dschannelcrossing.

I am thrilled that you’re attempting this incredible feat again. It says a great deal about you Delia and I’m so proud of you!! Go for it!!

Delis – take out the o & become Delia Salmon for a perfect name .