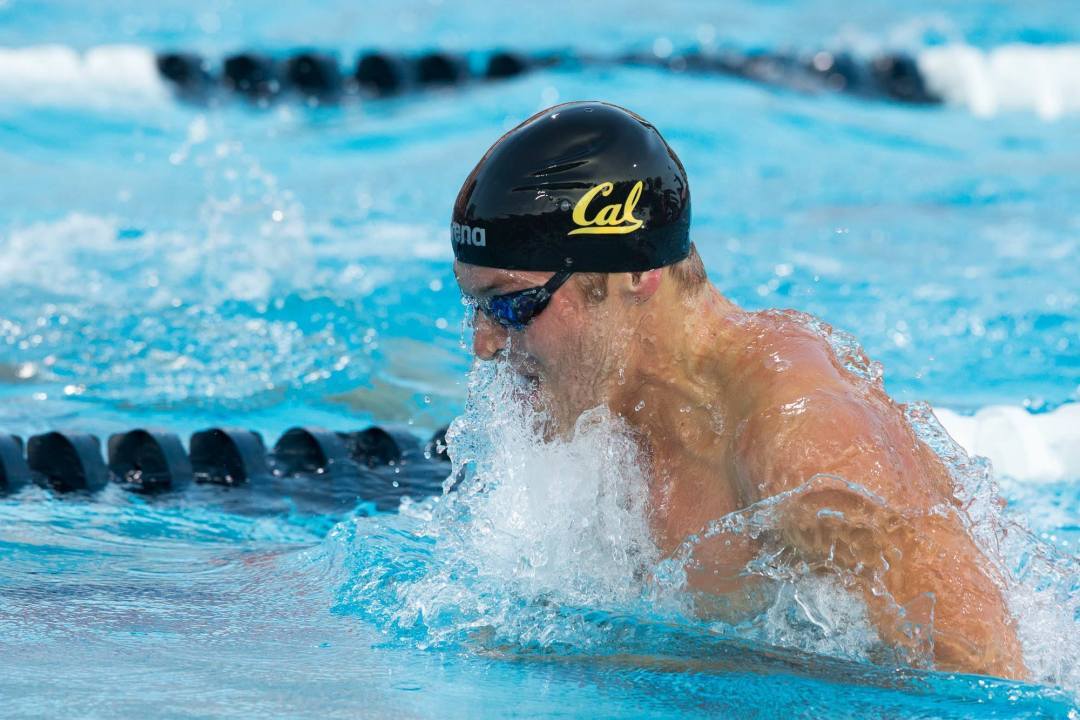 Chuck Katis leads the Pac-12 in the 100 breaststroke this season, and leads Cal to the top of the latest CSCAA poll. Archive photo via Tim Binning/TheSwimPictures.com

Editor’s Note: SwimSwam is not a voting party in these rankings, and we post them as a courtesy to the CSCAA. We put out our own biweekly power rankings as well.

The Cal Golden Bears have vaulted from #6 into the top spot of the men’s CSCAA poll after a win over #19 Wisconsin and a strong performance in their annual triple distance meet against Stanford.

Perhaps the biggest surprise in the rankings is that Georgia has stayed at #4 after winning a dual meet against the Florida Gators on October 31st and Georgia Tech on November 7th, but the idle Wolfpack, who beat the Bulldogs in a dual meet back in mid-October, have slid down to #6 without any swimming competition since the last poll was released.

Also of note, the Utah Utes, after beating the unranked Arizona Wildcats for the second-straight season, check in at #23 in this week’s poll. The Utes hold the top spot in the Pac-12 in four of the five NCAA-scoring individual freestyle events.

CSCAA NCAA Division I Men’s Swimming and Diving Ranking as of November 13, 2014

Just looking at the PAC 12 teams Cal deserves the No. 1 ranking at this point. USC will be much higher than 13th by the end of the season. Scratching my head on Stanford being ranked 10th currently. That’s got to be on past performance not this year’s results. Utah should be ranked higher at this point, they would blast Princeton, Minny, PSU, Mizzou, VT, and possible Wisky right now both in swimming & diving. Notre Dame at 25th? Why?

Saw Cal and Wisconsin compete against each other last week and it wasn’t pretty. Didn’t see the Stanford/Wisky meet, but if Cal’s number 1 right now and Wisconsin’s number 19 the gap between the top tier teams and everyone else is nearly as pronounced on the men’s side as it’s been on the women’s side for awhile.

Texas is definitely a better team than Michigan. Louisville is ranked too high. USC and Alabama need to be higher