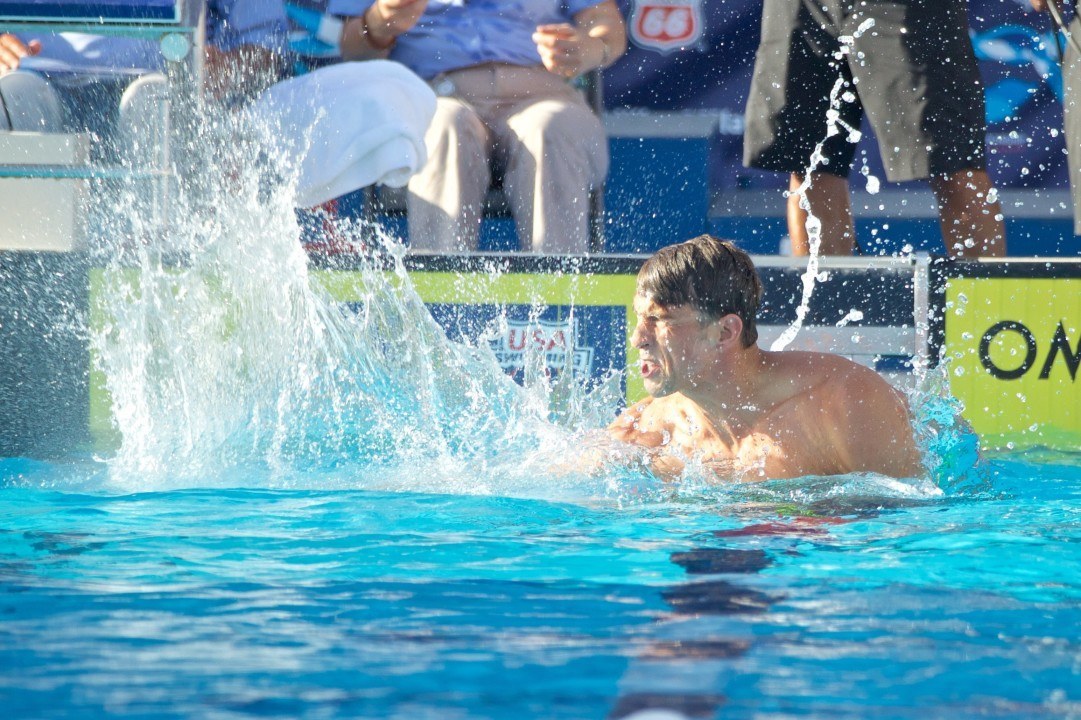 Michael Phelps and Chad Le Clos will do battle tonight in what could be the race of the Games. Archive photo via Rafael Domeyko/Domeyko Photography

In what may very well be the race of these Olympic Games, Michael Phelps and Chad Le Clos will do battle tonight in the men’s 200 fly final.

A big reason why Phelps opted to return to the sport was because his preparation for the 2012 Olympics was nowhere near where it needed to be. Phelps still swam well in London, but no doubt what has stuck in his mind ever since then was his devastating loss in the 200 fly to the South African Le Clos, who clipped Phelps at the wall by five one-hundredths of a second. Le Clos also denied Phelps a record third straight gold medal in one event. Phelps went onto achieve that feat later in the meet in the 200 IM and 100 fly, but that loss no doubt left a sting.

Le Clos and Phelps exchanged words last summer while Le Clos was competing at the World Championships and Phelps the U.S. Nationals, with Le Clos winning the world title in the 100 fly only to have Phelps beat his time by eleven one-hundredths of a second later that day. Phelps also posted the fastest time of the year in the 200 fly, while Le Clos only managed silver.

Oh yeah, Phelps and Le Clos aren’t the only two in this race. A pair of Hungarians could very well challenge the two of them for the top spot on the podium when all is said and done.

Laszlo Cseh won the world title last year over Le Clos, and leads the world rankings this year after going 1:52.91 at the European Championships. His countryman Tamas Kenderesi has been making steady improvements this year, and posted his best time in the semi-finals in 1:53.96 to actually beat all three of the big men for lane 4 in the final tonight.

Cseh and Kenderesi will swam in lanes 3 and 4 tonight, while Phelps and Le Clos will swim in lanes 5 and 6.

The women’s 200 free sets up to be a great head-to-head battle as well, though there has been no documented rivalry between the two who will butt heads.

After avoiding a head-to-head clash last year with Sarah Sjostrom dropping the 200 free, her and Katie Ledecky can’t hide from each other anymore with the two of them set to battle side-by-side in the women’s 200 free.

Ledecky won the world title last year, only to have Sjostrom lead-off the Swedish team in the 800 free relay with a faster split. Ledecky is a perfect 13-for-13 in major individual finals in her career, and that perfect record has never been more at risk than tonight.

Sjostrom will swim in lane 4 after producing the top time in the semi-fnals of 1:54.65, while Ledecky will have lane 5 after going 1:54.81. World record holder Federica Pellegrini, likely won’t be able to match either of them, but will be the front-runner for bronze swimming out of lane 3.

The women’s 200 IM final will be all about Katinka Hosszu, who searches for her third Olympic gold medal of the meet after winning the 400 IM and 100 back earlier.

Great Britain’s Siobhan-Marie O’Connor had a terrific semi-final performance of 2:07.57, and will actually take lane 4 tonight. She’ll probably need to take off at least a second from that to challenge Hosszu, but is otherwise the favorite for the silver medal.

The men’s 800 free relay will be an exciting one as well, with Michael Phelps potentially competing after his 200 fly showdown. There is plenty of speculation as to whether or not he will swim on it, but either way the Americans are expected to take gold.

Great Britain is their only true contender, after upsetting them last year for the World Championship title. The Australians would have to be the favorites to join the Americans and Brits on the podium.

Along with those four finals, we’ll see three different rounds of semi-finals. Here’s a quick preview of each of those:

Kenderesi will win because everyone just everyone thinks its Le Close vs Phelps.

I agree, it usually happens like this but MP will have kenderesi next to him and me Clos

I love Phelps as a swimmer but I want Cseh to win this so badly. Always the bridesmaid.

I wouldn’t sleep on Cseh, his 1.55 in the semis was the easiest I’ve ever seen. Gonna be an extremely exciting final no matter what.