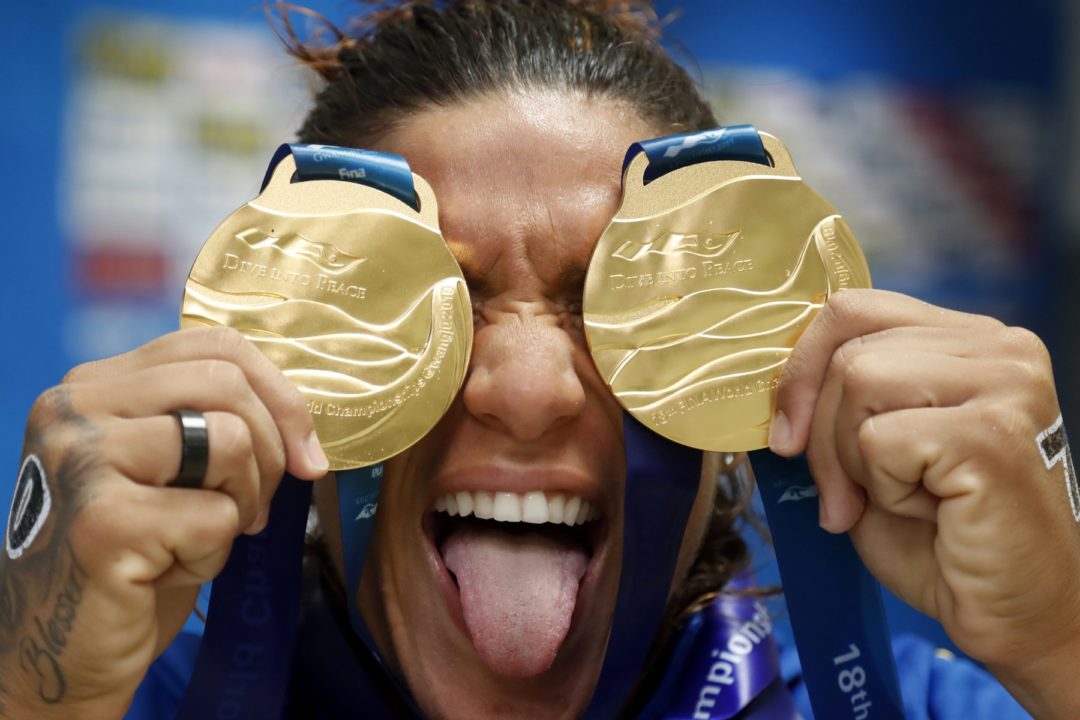 Ana Marcela Cunha (above) Brazil won her 4th 25km title in the last 5 editions, and her 2nd gold medal of these World Championships. Current photo via Satiro Sodré/rededoesporte.gov.br

The most grueling open water races on the traditional event schedule became even more grueling on Saturday morning in South Korea as competitors battled for 5 hours, with a monsoon bearing down on the Korean peninsula, against torrential rain and 2-4 foot waves to crown the final 2 World Champions in open water of 2019.

One US official, Sandy Drake, posted about her experience on a zodiac boat during the race on Facebook:

“Not a fun day today. Typhoon Denas is hitting us. We ran the 25k in heavy pounding rain and strong wind gusts. I was in a zodiac boat for close to 7 hours. Soaked to the bone. Freezing. Shivered enough to lose 1000 calories. I’ve been off the boat for almost 3 hours and I’m still rocking.”

The conditions actually resulted in times that are very fast in a historical context for an event that was the original world championship distance in open water.

In fact, both races marked the 2nd-fastest winning times in history after the 2013 World Championships in Barcelona. France’s Axel Reymond defended his men’s title, swimming about 11 minutes faster than last year; as did Ana Marcela Cunha in the women’s race, dropping about 13 minutes from her winning swim last year.

Two titans of open water swimming bowed out early from the 24-swimmer field: France’s Marc-Antoine Olivier, who was in the top 4 for most of the early racing (including leading 2 laps), dropped out about midway through the 25km race; while 5km champion Kristof Rasovszky of Hungary only made it to about 10km before exiting the course – he was in the back of the pack for the most part, though he did swim about 2 laps of full-out sprint to briefly make contact with the leaders.

With an incredibly-tight pack throughout the race, there was lots of movement in rankings throughout. For example, Raymond, on lap 14, at one point slid back to 17th place. Even then, however, he was only 12 seconds behind the leader. It remained that tight until about lap 15, when Hungary’s Gergely Gyurta made a big move and built his lead to 30 seconds, then a minute, then 90 seconds and beyond. He wound up having an asthma attack mid race, and a 90 second lead over everyone at the end of lap 17 found him a minute behind the leaders about 2 kilometers later, and he would finish 10th: 1 minute and 51 seconds behind.

In a true open water battle, the race really and truly came down to the final sprint and who had the most left in the last lap. Reymond and Russia’s Kirill Belyaev were the two there at finish. They were each patient, not really making their big moves until the last few laps when they, along with Italy’s Alessio Occhipinti, started to separate from the field. The final finish order went Reymond, Belyaev, and Occhipinti, with Italy’s Simone Ruffini missing the podium by about 5 seconds for 4th place.

The American men, David Heron and Brennan Gravley, finished 14th and 15th, respectively. While the pair swam together for much of the race, Heron made a late break and wound up finishing 2 minutes better than Gravley, in spite of their consecutive placement.

Without her 2 chief rivals Sharon van Rouwendaal (scratch) and Arianna Bridi (never really in the race) near the front, Brazil’s Ana Marcela Cunha felt fully in control of this 25km race from start to finish. This marked her 2nd gold medal of the championship (she also won the 5km race) to go with a 5th-place finish in the 10km race. The 27-year old Cunha has now won this title at 4 of the last 5 World Championships, with a medal-less 2013 being the only gap in her record.

While Cunha’s traditional foes in this longest-of-races weren’t present on Saturday, there were some relative-upstarts in the field to at least keep the race interesting. 23-year old German swimmer Finnia Wunram found her first international podium with a silver medal, 8 seconds back, and France’s Lara Grangeon took bronze, culminating a successful transition from pool swimming European medalist to open water elite at 27-years old.

By lap 17, the final American challenger Erica Sullivan had fallen ouot of the lead pack, going from 5 seconds back to 35 seconds back in just over a kilometer, and that group stayed together for about 2 more laps until 4th-place finisher Lisa Pou also fell off. At that point it was Cunha, who led a few laps early in the race but was able to mostly draft on the less experienced Wunram and Grangeon, that was able to pull to the front for a relatively-comfortable 8 second win. There were no photo finishes here: Grangeon was another 10 seconds back of Wunram, Pou 7 seconds behind her countrymate, and then it was nearly 3 minutes before 5th-place finisher Sullivan crossed the line.

4 swimmers didn’t finish the race, including Australia’s Chelsea Gubecka, who exited the course after just 5 laps, when she was already 4 minutes off the pace.

I can’t figure out if the 25K competitors are really brave or just plain crazy. I watched the race, 5 hours of non-stop swimming in very choppy conditions. You could not pay me enough to do that. I used to swim in the SoCal Pacific Ocean, just being 100 yards off shore frightened me. I always thought some big fish or sea monster would drop by for a visit and eat me for lunch. I guess I saw too many monster movies as a kid.

I gotta hand it to the swimmers, that is one tough race and I was really impressed with their fortitude.

Cunha actually love the choppy conditions.. the worst conditions, better for her.

Congrats to Erica Sullivan and Katy Campbell! Everyone who completed it swam a courageous race, given the conditions and distance. But, a great result for Erica and Katy on the world stage. I didn’t watch the whole race, but peaked in on it from time to time. Smart race–Erica looked like she had a plan to stick with the leaders but not actually lead. She stayed with the best in the world for over 20 km (12+ miles!). Just 3+ minutes back of a dominant athlete like Cunha after 5 hours of racing is super impressive from both these ladies!

Does this race serve any Olympic qualification?

No, only 10K in the Olympic program.