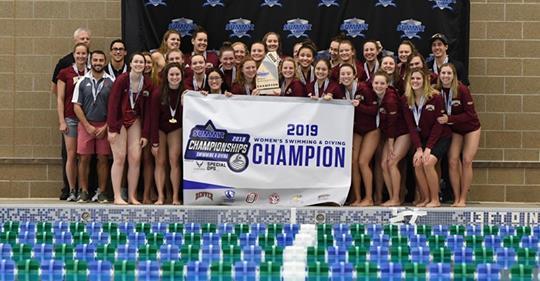 Minnesota's Hicken-Franklin previously spent 16 seasons at the University of Denver, 11 of them as associate head coach. Current photo via Denver Swimming and Diving

She will replace Brian Schrader, who led the combined-gender program for 13 seasons. The school put up a job posting for the position in late June and did not respond to a request for comment regarding the vacancy.

Hicken-Franklin previously spent 16 seasons as an assistant at Denver, 11 if them as associate head coach. Primarily leading the Pioneers’ distance squad, she helped coach the team to three consecutive conference titles in 2014, 2015, and 2016. Prior to her coaching career, Hicken-Franklin swam for Minnesota from 1993-1997. She was a six-time Big Ten Conference champion finalist in the 200, 500 and 1650-freestyle, and a two-time NCAA Academic All-American honorable mention in her junior and senior year. Hicken-Franklin was also finalist at the Canadian Olympic Trials in 1992.

During Schrader’s tenure at Denver, both the men’s and women’s programs were dominant in their conferences. The program has spent time in the Sun Belt Conference, Western Athletic Conference, and for the last six seasons (in all of which they have won the conference title), the Summit League.

In 2017 and 2018, Denver won every swimming event at the Summit League Championships on both the men’s and women’s sides. In 2019, the women did the same, and the men came close, save a DQ in the 800 free relay (though their B relay, ineligible for a win against A relays, finished faster than all other A relays).

Absolutely deserved. As an alum I am so excited to see what Alicia and the team will accomplish in the coming years. Go Pios!!

Well deserved! Congrats Alicia and best of luck to you and your family. The B1G will miss ya!

Congrats to Alicia!
Any word on SMU?