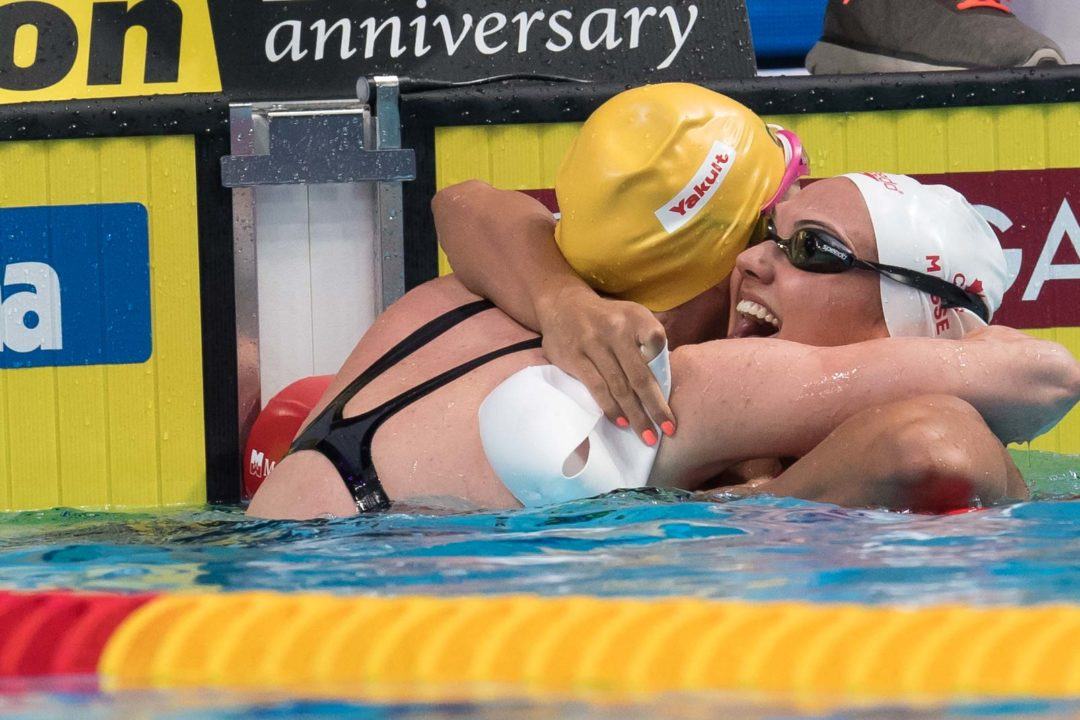 Kylie Masse and Emily Seebohm are set to go head-to-head in the backstroke events at the 2018 Commonwealth Games. Archive photo via Mike Lewis/Ola Vista Photography

Women’s backstroke may be the most stacked discipline of all at the 2018 Commonwealth Games. It will feature reigning 100m world champion (and world record holder) Kylie Masse of Canada, reigning two-time 200m world champion Emily Seebohm of Australia, along with the world’s #1 200 backstroker in 2018 Taylor Ruck and a host of others who are among the world’s best. Take a look at the three events closer below:

The 50 back is relatively wide open compared to the 100 and 200, with six women in the field sub-28 in 2017. Leading the way is Seebohm, who broke the Commonwealth Record en route to a 4th place finish at the World Championships in 27.37. Her teammate Holly Barratt made that final thanks to a best of 27.51 in the semis, and the third Australian Minna Atherton has been as fast as 27.49 back in 2016. The 17-year-old stacked six medals at the 2015 World Juniors, and appears to be on track to get back down to her bests from a few years ago.

Joining the Australians in the 27-second range are Masse, fellow Canadian Jade Hannah, and defending champion Georgia Davies of Wales. Masse missed the final in this event at World’s after setting the 100m world record, clearly putting more of an emphasis on the 200. Still, she’ll be good for a 27-mid, and showed good speed at the Canadian University Championships in February, lowering her SC National Record by two tenths. Hannah tied for gold at the World Juniors last summer in 27.93, and will gain some senior international experience against some of the world’s best with a finals berth within her grasp.

The 27-year-old Davies went a best time of 27.56 to win the Games four years ago in Glasgow, and didn’t go another PB until last summer at the World Championships. Getting through to the final in 27.49, Davies is sub-28 again in 2018, topping the world rankings in 27.75. While she may be flying under the radar with Seebohm and Masse in the field, she could easily defend her title.

Others expected to contend for a spot in the final are the Scottish trio of Kathleen Dawson, Lucy Hope and Cassie Wild, England’s Anna Maine, and former member of the NC State Wolfpack Alexia Zevnik of Canada.

The 100 back shapes up to be a direct head-to-head showdown between Masse, the reigning world champion, and Seebohm, the 2015 world champion and defending Commonwealth champion. The superstar Canadian broke the world record last summer in Budapest in 58.10, and with no reason to taper thus far in 2018, has already gone 58.54. We could very well see the first woman go under 58 seconds.

Seebohm has been putting up 58-second swims since 2009, and was a very solid 58.59 to win bronze last summer. I think we’ll see her dip into the 58-lows once again, but can’t see her getting by Masse.

Those two seem to have a lock on gold and silver, but if there’s one swimmer who can jump up and join them in the 58s it’s Canadian Taylor Ruck. After rattling off a pair of 59.2 swims to ultimately win silver at the World Juniors in August, Ruck established a new personal best at the Atlanta Pro Swim in 59.13. That puts her third in the world this year behind only Masse and Seebohm, and a 58 looks to be coming.

Including Ruck, there are seven swimmers who have been 59 in either 2017 or 2018, meaning one will miss out on the final. Australian Kaylee McKeown got under a minute for the first time at the New South Wales Championships in January (59.67), but wasn’t quite able to match it at their Trials (1:00.09). The third Aussie Hayley Baker got back under the mark at Trials (59.95) after failing to do so last year. Neither has proven to consistently get under a minute yet (McKeown is just 16, by the way), so they’ll have to be on their ‘A’ game in such a stacked event.

England, Scotland and Wales have one major contender each in Elizabeth Simmonds, Kathleen Dawson and Georgia Davies, with Jessica Fullalove (England) and Cassie Wild (Scotland) looking to break the minute barrier for the first time and get in the mix as well. Canadian Jade Hannah will also be a factor after taking bronze at World Juniors in 59.62.

Like the 100, the 200 shapes up to be a showdown between Seebohm and Masse. However, unlike the 100 where Ruck is looming in the distance, there are three swimmers right there within reach.

The 17-year-old Ruck put on a clinic in this event in Atlanta, winning by nearly five seconds in a lifetime best 2:06.36. Given the steady improvements she’s made in this event since breaking out last summer in 2:07, she looks to be setting up to go 2:05 and challenge for the gold medal.

Also in the hunt is the third Canadian, Hilary Caldwell, and Australia’s McKeown. Caldwell, the 2016 Olympic bronze medalist, took 6th at the World Championships last year with McKeown taking 4th. Both own bests of 2:06-high, but will be hard-pressed to medal in this stacked event. The field features four of the top-six finishers in Budapest, along with Ruck who ranks #1 in the world this year. Wow.

As for the battle between Seebohm and Masse, Seebohm’s ability to close the last 50 seems to be her deadly weapon in this event, pulling off come from behind wins both in Kazan and Budapest en route to back-to-back world titles. The funny thing is she’s gotten the better of Masse in both the 50 and the 200 so far in her career, but not the 100. Masse seems to be able to put the 100 together perfectly, and if she can translate that over to the 200 in the final, we may see her down into the 2:04s. She did see improvement over the short course season in this event, knocking over six tenths off her time at the Canadian University Championships in 2:02.18.

Also figuring into the finals picture here are some of the names from the 100 such as Baker, Simmonds, and Fullalove, and England’s Chloe Golding is another to watch for as she was under 2:10 last year.

Masse is going to be on fire

who else is most excited for these races