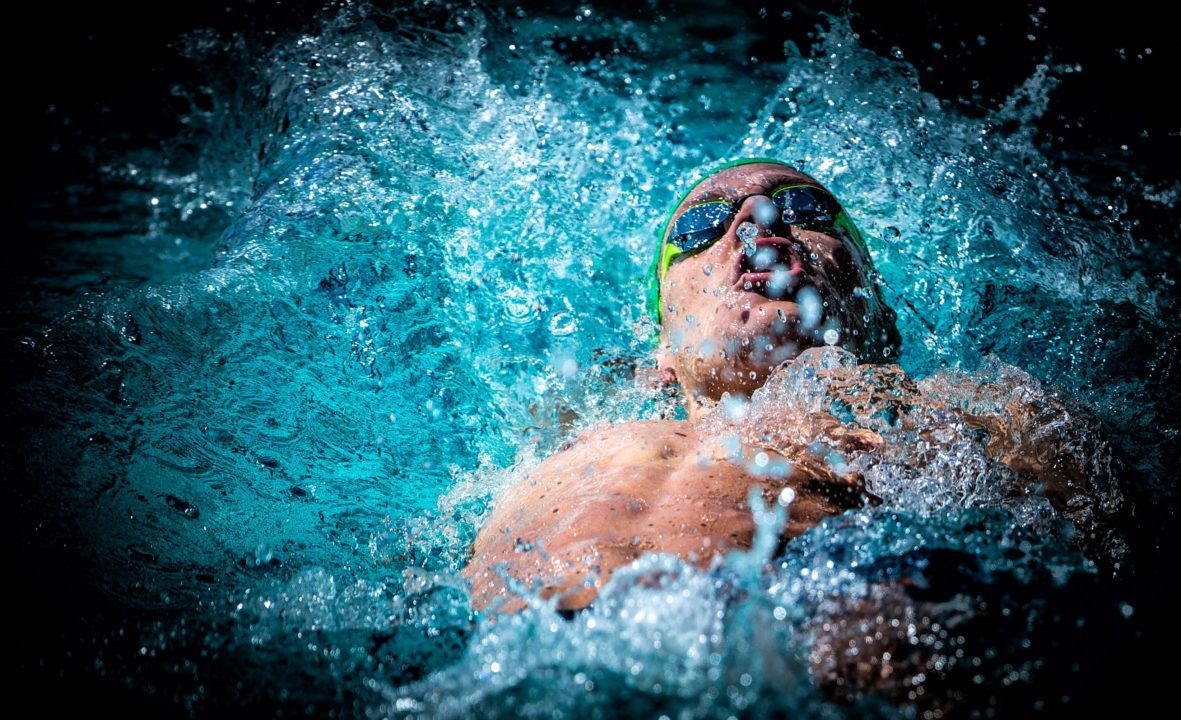 TritonWear and SwimSwam bring you the best in swimming race analysis for the 2018 Commonwealth Games. With the power of TritonWear, you can access 12+ metrics for all athletes simultaneously, display the results in real-time to unlimited screens on deck, and review later in an easy to use interface for monitoring progress and identifying trends over time. See all Tritonwear Race Analysis here.

The 200 IM is always an exciting event. Having all the strokes in one race gives each athlete the chance to showcase their strengths and hold off their competitors in their weaker strokes. The men’s 200 IM at the Commonwealth Games was no different, featuring a thrilling race and a new Games record set by Australia’s Mitch Larkin with a time of 1:57.67.

The first leg of the IM was a tight race across the field, with just over a half second difference between the first and last off the turn. Despite his below average DPS and stroke index, Australia’s Clyde Lewis swam the fastest butterfly length by using a faster stroke rate to compensate for his shorter strokes and gain the lead.

New Zealand’s Bradlee Ashby was first to follow, employing the same strategy and registering nearly identical metrics. He matched Lewis’ 18 strokes with very minimal difference between their stroke rate, DPS, and stroke index, but was unable to generate as much speed.

Larkin swam this lap as fast as Ashby, but pulled longer and more efficient strokes at a slower rate. He reached the wall with 1 less stroke and took a nice, fast turn to set up for the backstroke length, which marked his lead through the race.

Larkin gained the advantage early on in the backstroke leg, which was expected given his performance in this stroke earlier during the games. He produced one of the longest underwaters and used this opportunity to start closing the gap. He didn’t execute the most efficient strokes and produced a relatively low DPS, but he was able to use his fast stroke rate to speed through the lap. The other competitors were unable to keep up with his pace, allowing him to be the only competitor to split below 30.

Lewis almost made the mark, pulling fewer strokes with more efficiency and splitting at 30 flat. But, Larkin’s speed put him well ahead of the field.

Scotland’s Daniel Wallace picked up his pace and stepped up his performance on the breaststroke leg. He consistently executed the most efficient strokes and produced the highest DPS in fly, back, and breast. However, he was not able to balance this out with his stroke rate, and his slower than average stroke rate placed him last at the halfway mark.

It was on this lap when this strategy worked to his advantage. He took the fewest strokes but he generated the fastest speed with the power and efficiency of his strokes. He clocked in the fastest split on this leg, which placed him in a better standing.

Although Larkin was not as proficient in breaststroke – his DPS, stroke index, and stroke rate fell below average and he split the second slowest time – but he had gained a large enough lead on the previous laps to maintain his front position heading into the final stretch.

Larkin secured his win on the freestyle leg, employing the same strategy he used in backstroke. He sacrificed a bit of efficiency and DPS to pull more strokes at a faster rate, finishing the race under record time.

The freestyle leg was made even more exciting by Scotland’s Duncan Scott, who overtook Wallace, Ashby, Szaranek, and Lewis on this lap to win silver. Unlike Larkin, he went for fewer, more efficient strokes at a slower rate.

It was a close race between him and Lewis, but while Lewis was pulling at a faster rate, he was not gaining as much distance with them and was unable to produce as much speed. The overall speed Scott produced with the length and power of his strokes allowed him to split almost a full second faster than Lewis, and beat him to the wall for the silver.

This race highlights the fact that there is no single race strategy that is optimal for every athlete in any stroke or distance. There were a variety of strategies that won each leg of the 200 IM; some strokes were swum fastest with a fast stroke speed, others with better stroke efficiency. But, this was also dependent on the athlete, who tailored their overall strategies based on their strength and capabilities in each stroke.