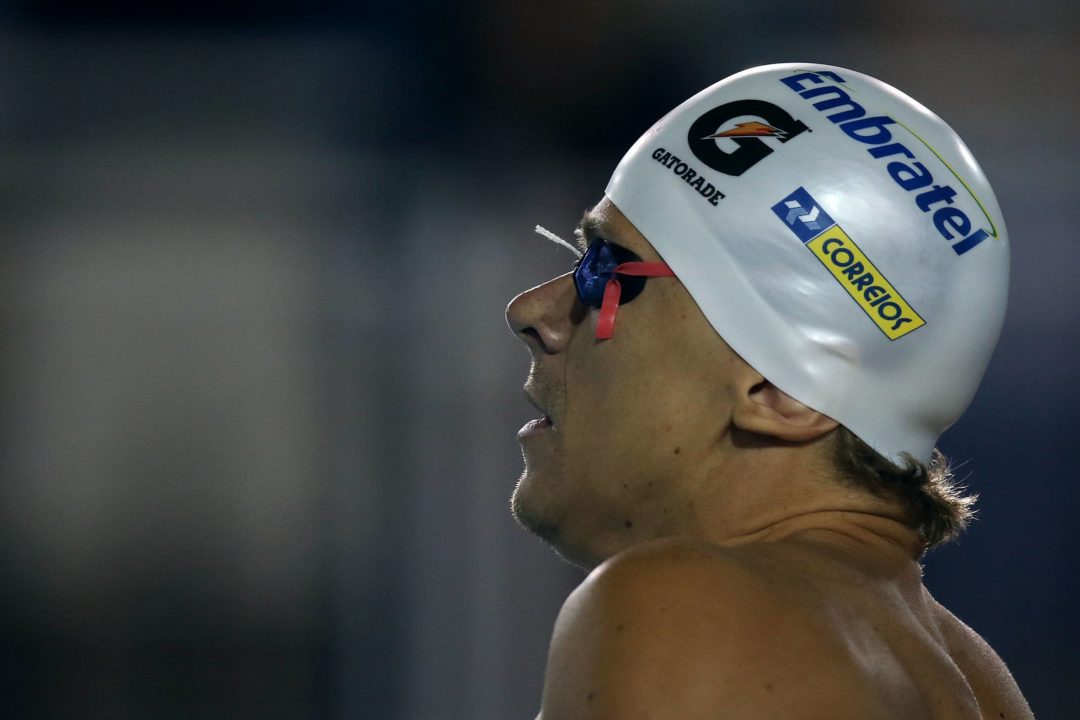 Cesar Cielo finished his swimming at the Metropolitano in Belo Horizonte, Brazil with an impressive early-season swim in the short... Archive photo via Satiro Sodre/SS Press

Cesar Cielo finished his swimming at the Metropolitano in Belo Horizonte, Brazil with an impressive early-season swim in the short course meters 50 free.

While most of the swimming world is nearing the end of a season with local to national to international championships hitting around the world, Cielo is beginning his journey this weekend toward the Jose Finkel Trophy (Brazil’s short course championships) and he hopes the Short Course World Championships in Doha, Qatar.

After two average swims on Friday, Cielo turned up a notch for Saturday with a 21.27 in the 50 free over a short course meters pool, and scratched his entry in the 100 fly (as he almost always does).

Cielo’s time is the 5th-best in the world in 2014, though most of the best short course meters swimming is yet to come this season.

After the race, he told the Brazilian publication Globo Esporte that he felt he could have been “more aggressive” in his first 25, but that overall it was a good swim. He also said that he wouldn’t decide on whether to race the 100 free at Worlds until after the Jose Finkel Trophy.

Belo Horizonte… Isn’t that the same place where Germany spanked Brazil 7 – 1 in the World Cup Semi? Cielo is getting it done and will be a big factor in Rio 2016 IMO.

Yes…the city of the doomsday(haha).

Check out his accomplishments since the suit ban, then you will find out your comment is wholly ignorant.

Since Cielo won 50 free Panamerican gold, in 2007, Cielo lost(50 free) only two times in major events(2010 Panpacs and 2012 Olympics).
Before London, he got some years without defeat.2009-no defeat,2010-one defeat(to Adrian),2011-no defeat,2012-one defeat.
After knee operation, he still dont have his 2010 start,so he lost a lot of minor meetings.Even with that, he was capable to do a textile best.I think he is among top3 best all time performers in 50free event.

Cielo has to be one of the most overrated suit swimmers ever.

Yeah I agree to that, he’s chasing the 50 fr SCM world record and I also think he wants be the first ever to swim sub 20 (who wouldn’t lol) VLad Morozov would also be a challenge for the record aswell as he is crazy fast in yards.

Racing short course meters in July just doesn’t sound right for a world class swimmer, but solid time. I wish Cielo would have finished out the LCM season to see what he could do.

I agree with you.But i think we will see the last season of his swim life at short course meters.Next year and 2016 it is all about LCM and he will retires after that.I think he wants to beat Schoeman 20.30 to be the first guy to have WR´s in all pools in 50free.
Because of the walls, SCM is a good work on his knees.
I think he will swim 100free only on relays at Worlds.