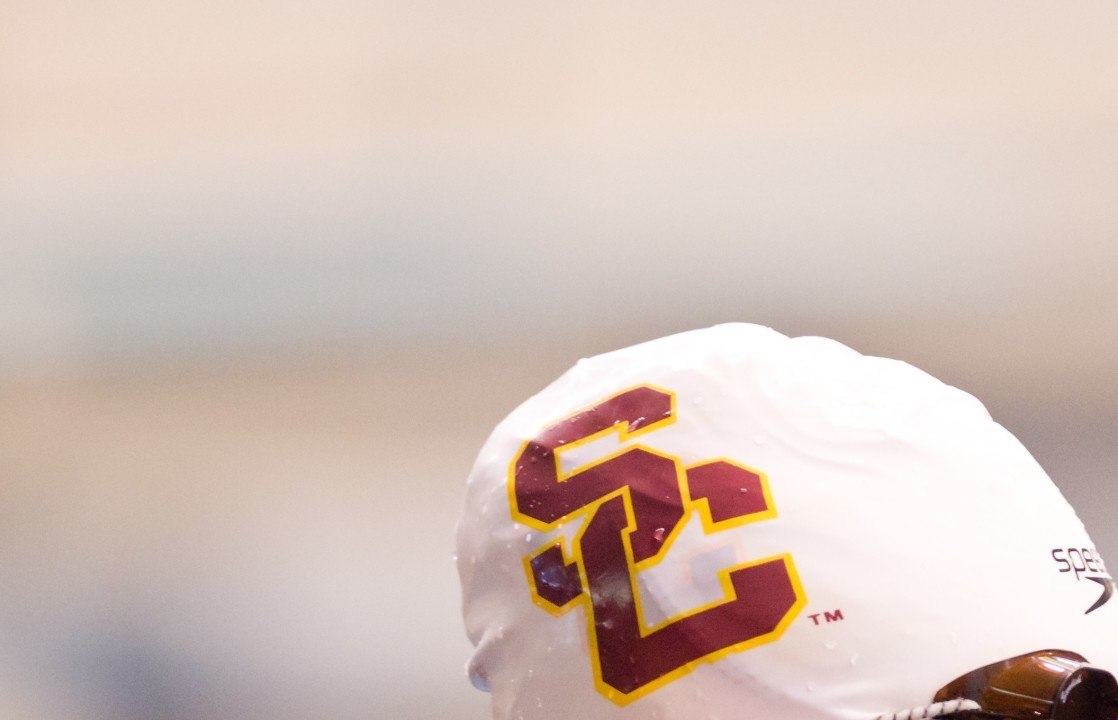 After a semester abroad in Australia, USC junior Carsten Vissering made his return to NCAA swimming with a very strong 100 breast in USC's Monday dual with the visiting Wisconsin Badgers. Stock photo via Tim Binning/TheSwimPictures.com

Isabel Ivey is leading a 1-2-3-4 Cal charge in the 100 free final, putting Cal in a position to potentially outscore four-time defending champions, Stanford

Isabelle Stadden will challenge the 1:50 barrier in the 200 back today, while the Cal Bears hold the top four seeds in the 100 free.

Running away with the 100 breast by a long shot was Vissering, who posted a 53.27 to beat out 2nd place MJ Mao of Wisconsin by over three seconds (56.55). Not only was that a big win, but it puts him at #22 in the country right now. That might not look like much, but it must be considered that Vissering has yet to wear a tech suit this year for a mid-season invite, the type of meet environment and circumstances where all of the nation’s leading times have come from.

The women’s meet was very close, with just four points giving the Trojans the victory at the end of the day.

Junior Carsten Vissering, in his first action as a Trojan since returning from a semester studying abroad, won both breaststroke events, fellow junior Alex Valente swept the fly events and freshman Robert Glinta claimed both backstrokes while sophomore Louise Hansson won twice as well to lead USC’s No. 7 USC men and No. 9 women to a pair of victories over visiting Wisconsin on Monday (Jan. 15) at the Uytengsu Aquatics Center.

The men’s squad improved to 6-0 overall with a 148-109 victory over the Badgers while the women moved to 7-0 after their 133-129 victory. The Trojan men are now 6-1 against the Big Ten foe since the schools started the annual January dual seven years ago while USC’s women are 7-0.

The biggest news for the Trojans was the return of Vissering, the 2017 Pac-12 champion, school record holder and All-American in the 100y breast who spent the fall semester studying in Brisbane, Australia. He made his return by winning the 100y breast in an NCAA B cut of 53.27 and capturing the 200y breast in 2:01.90. He also helped USC to a win in the 200y medley relay to open the meet.

LOS ANGELES — The Wisconsin swimming and diving team finished up its trip west with a solid performance against USC on Monday.

Following a period of intense training during their annual training trip to Hawaii, the Badgers put their endurance and grit on display back on the mainland in a dual meet that went on to be swept by the Trojans.

Leading the way for the 18th-ranked UW women, senior Abby Jagdfeld, junior Jess Unicomb and sophomore Beata Nelson each scored multiple wins in the clash with No. 9 USC.

Jagdfeld won the 200-yard and 500-yard freestyle events and combined with Unicomb, Marissa Berg and Emmy Sehmann to cap the day with a victory in the 400 free relay.

Unicomb added individual an individual event win in the 200 back, finishing in 1:57.38 to claim victory by more than four seconds.

Despite those efforts, the Badgers fell just short of the USC women, who held off UW for a 133-129 victory.

Seventh-ranked USC took the men’s competition by a score of 148-109.

Up Next
The Badgers have until Jan. 26 to prepare for its final regular-season competition, the Shamrock Invitational at Notre Dame, where they will be up against a number of solid opponents. Notre Dame’s men’s team is currently ranked 20th and its women’s team is ranked 22nd.

I disagree that it doesn’t look like much 53.27 in a dual meet and your first one back is pretty impressive

That’s a STRONG return for Vissering (at least in the shorter distances). Depending on when he returned, maybe he didn’t go through full winter training and isn’t so broken down.

What the heck is wrong with SC distance group? Where is Becca Mann?

I almost wonder if she’s going to pull a Cierra Runge… Seriously, where is she?

I seem to remember she had back problems going back to the months before Olympic Trials so assume that’s been part of her struggles in the pool. Would be great to see her back.