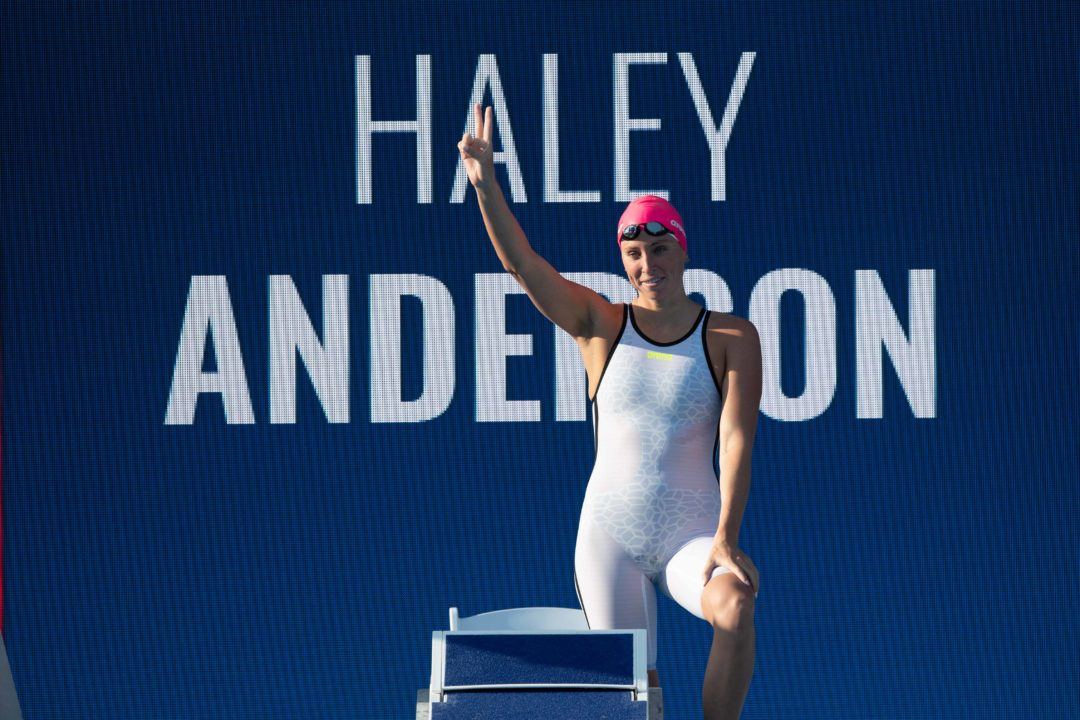 The latest in a string of recent additions, 2012 Olympic silver medalist Haley Anderson has been added to the Cali Condors' 2020 ISL roster. Current photo via Mike Lewis/Ola Vista Photography

In slow motion, by the strictest interpretation, the disqualification was probably right; but, it is really difficult to see at full speed.

When the dust had settled, Energy Standard finished 12 points clear of the Condors, regaining the title after losing to Cali last season

The latest in a string of recent additions, 2012 Olympic silver medalist Haley Anderson has been added to the Cali Condors’ 2020 International Swimming League roster. Anderson finished second in the 10-kilometer open water race at London 2012 in a 1:57.38.6, just 0.4 seconds behind Hungarian gold medalist Éva Risztov’s 1:57.38.2.

Anderson has represented the US internationally since 2009 when she swam at the Junior Pan Pacific Games, winning gold in both the 800 and 1500 freestyles. She also swam at the 2009 World Championships in Rome, placing 28th in the 800 free and 9th in the 1500 free. After her silver medal performance at London 2012, she raced to a gold medal in the 5k open water competition at the 2013 World Championships in Barcelona. In 2014, Anderson won open water gold again, this time in the 10k at Pac Pacs.

Collegiately, Anderson swam for the University of Southern California under Dave Salo from 2009-2013. There, won several Pac-10 titles in the distance freestyles and 4×200 free relay, along with the 2012 and 2013 NCAA titles in the 500 free.

Anderson joins men’s team signees Bowen Becker and Khader Baqlah as new additions to the roster following the news that all 5 Australians on the Condors would be unable to participate in the 2020 season. Given COVID-19 related travel restrictions, Conders General Manager Jason Lezak has announced that Ariarne Titmus, Meg Harris, Clyde Lewis, Mitch Larkin, and Jack Cartwright will not participate in the ISL meets which are to be held in Budapest this fall.

Given the removal of the Australians from the roster, Anderson will be a key pick up for the Condors and will serve to fill the 400 freestyle position left behind by Titmus. Titmus won the 400 freestyle for her team twice last season, at the Naples with a 3:58.34 meet and at the Las Vegas finale with a 3:56.21. Titmus came out victorious against a competitive field of women including the 2016 Olympic bronze medalist in the 400 freestyle, Leah Smith.

With a focus on the 10k marathon and 1500 freestyle at the international level, Anderson is well equipped to jump down to the 400 freestyle and join Hali Flickinger to retain the Condors’ threat level in that event. Anderson’s best time in the event comes from the 2018 US National Championships where she won a bronze medal with a 4:07.21, behind gold medalist Katie Ledecky (3:59.09) and silver medalist Leah Smith (4:02.21). Converting Anderson’s bronze medal-winning time to short course meters puts her best at a 4:00.81 SCM, which would have scored her fourth place at the 2019 ISL finale, just behind Smith.

Another potential event for Anderson this season will be the 400 IM. Returning for her second season with the Condors, Melanie Margalis won 4-for-4 400 IMs that she raced last season including notching the fastest time in the event at the 2019 Las Vegas finale. Swimming a 4:24.15, Margalis beat out an impressive field to win the event for the Condors.

With a focus on distance freestyle in recent years, Anderson has not raced much of the 400 IM but her best time in the event from 2012 makes her a potential asset for the event. At the 2012 US Olympic Trials, she finished 8th in the 400 IM with a 4:43.17 LCM. Converted to SCM, that puts her at a 4:36.77; just a second off Flickinger’s 8th place finish for the Condors. Not in the top 8 in Las Vegas, Anderson’s converted 400 IM from 2012 would however have placed her 8th at both Indianapolis and Naples.

The addition of Anderson to the roster brings the Cali Condors women up to 15, with room for one more addition to hit the 16 swimmers per gender quota. With Australian men, Lewis, Larkin, and Cartwright out, and Becker and Baqlah in, the men’s roster also currently sits at 15 with 1 additional spot left to be filled.

Imagine being an open water swimmer

Don’t have to I live it aahahah