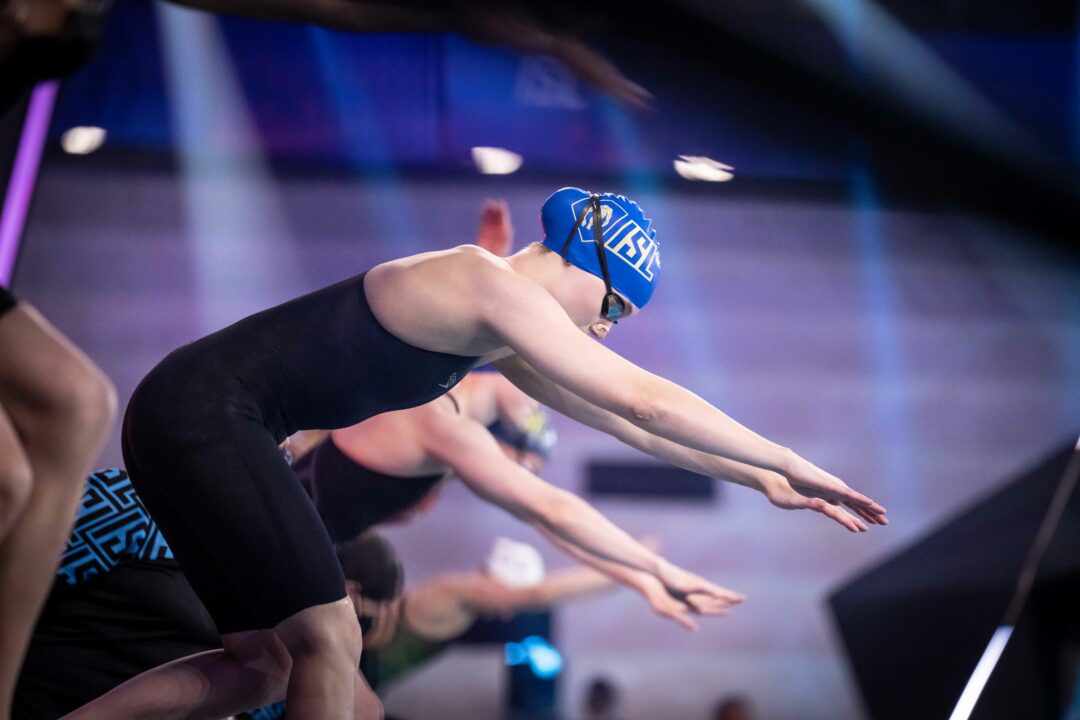 The second match of the 2021 ISL season featured the Cali Condors taking their first regular season win of season three. The LA Current was able to hold off the Tokyo Frog Kings’ point moves for second place, worth three club season points,. Meanwhile, the NY Breakers struggled with a limited roster.

The Condors won their first regular season match by 305 points, reeling in 707 points. The difference between the Condors and runner-up LA Current (402.5 points) was 25 more points than the Breakers’ total team score of 265 points, exactly 442 points less than the Condors’ score.

Near 305 point difference between Cali and LA (a.k.a. first and second). That 305 points difference is 25 more points than the Breakers scored period.

The Breakers fell off in the mixed 4×100 medley relay, finishing 7-8 with only 4 points due to jackpot. A tiring Joe Litchfield, who had swum three events prior, had also placed 6th in the men’s 50 back skins while Oleg Braunschweig finished 8th after taking 6th in the 100 back. Despite this, the team was able to establish strong names for future point pick-ups.

In the women’s 200 fly, Svetlana Chimrova came home strong to earn three jackpot points for 12 total points. Abbie Wood first earned 6 points in the 100 IM before topping the quadruple-distanced 400 IM with 21 total points, winning by a 5-second margin. Alicja Tchorz was able to advance to the second round of the 50 back skins, and just missed advancing to round three by 0.01s. Still, Tchorz earned 12 points alone, making up for a 5th-place finish in the 100 back.

On a different note, the Condors’ dominant win was powered by their big jackpot point hunt. Coleman Stewart was on fire today, both time-wise and points-wise. He out-performed his American record of 48.91 in the 100 back yesterday with a blistering 48.33, setting the first World record of ISL season three. That swim was strong enough to jackpot the entire field, totaling a 37-point pick-up.

Along with Stewart’s monster 48 stolen jackpot points from today alone, the Condors had stolen 44 more points from jackpot for a total of 92 stolen points on day two.

In the battle for second in the team standings, Tokyo had given the edge to LA throughout the session. LA kicked the meet off with a 1-2 finish in the women’s 100 free, courtesy of Abbey Weitzeil and Madi Wilson. Tokyo then answered in the men’s 200 fly, where Daiya Seto picked up 19 points with a jackpot win of 1:50.68, which was 2 more points than Weitzeil/Wilson’s 100 free points.

After Kanako Watanabe and Miranda Tucker went 3-4 in the women’s 100 breast (worth 11 points), Yasuhiro Koseki and Alessandro Pinzuti continued off their momentum with a 1-2 finish in the men’s race (worth 17 points). Takeshi Kawamoto came in clutch for Tokyo in the men’s 50 fly with a 10-point pick-up, upsetting Condor Caeleb Dressel by 0.07s.

While Tokyo had gained on LA with a 2-3 finish in the 200 free (13 points), 100 free runner-up Wilson of LA topped the event with a 12-point pick-up as an individual. Shortly after, Fernando Scheffer and Martin Malyutin went 1-2 in the men’s 200 free, a 17-point pick-up. Tokyo’s Seto swam in for last-minute points in the men’s 400 IM with 24 points, jackpotting LA’s swimmers. Kathleen Baker and Helena Gasson rounded the session out with a 4-5 finish in the women’s 50 back skins to shut out Tokyo of the second round.

I’m sorry but the ‘balance of teams’ is just….well, there isn’t balance. At one point, I believe Cali had Olivia Smoliga (one of top 2 Americans at one point, Lily King (current record holder), Kelsi Dahlia (former American record holder) and Erika Brown (one of top 2 Americans at one point) swim the 400 medley relay. Then on the men’s side, Dressel and 3 other warm bodies is strong, but combining with some of their teammates just makes the balance across all teams ‘off’. And I honestly don’t see it balancing out any time soon.

The whole point and purpose of this league was to create a ‘competitive swim league’ across all teams. NY Breakers last year barely had anyone… Read more »

I agree with most of what you said. I think the league recognizes that the eventual evolution has to be multi-year contracts, but at this point, I’m not sure they have the capabilities to manage a system like that (or are even close to it). They struggle to even enforce the rules on the books.

The bit about refusing to stay with one team just to rejoin the pool – I agree, and I told a lot of ISL people this offseason. The general response was a big “shrug” and nobody saw it as much of a problem. It definitely happened – I don’t want to call any swimmers out, but you can read between the lines and one should… Read more »

This point scoring system is very complicated, not sure the layperson would be able to follow.

ISL is quickly turning into a really bad competition.

There is maybe 3 teams with a chance of winning and one is an absolutely ginormous favourite.

Yeah, the New York Breakers can’t recruit the best New York swimmer Kate Douglass because she is going to college at the university of Virginia. That would help al little. There is also a few Long Island swimmers too young for the breakers as well since they are going to a JR National team.

Funny thing: New York Breakers has a grand total of 0 Americans on their roster