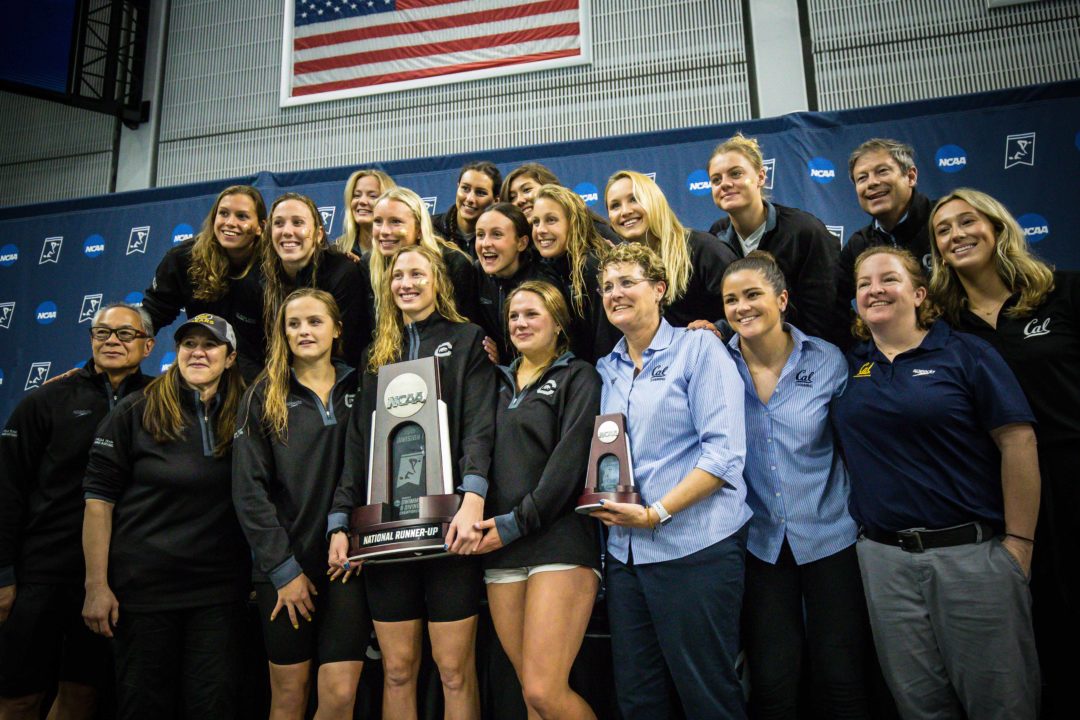 Dunleavy will pursue other interests after two years with Cal. Archive photo via Jack Spitser/Spitser Photography

“While this profession has been such a rewarding experience, I am excited for a new chapter ahead,” Dunleavy said. “There are too many people to thank who have been instrumental in my life through my coaching journey, and I would like to point out a few.”

“First, I would like to thank Teri for an incredible two years. She has been a phenomenal mentor. The hardest part of saying goodbye coaching right now is leaving such a special team and walking away from working with such a special woman. It is comforting to know that Teri and I will have a lasting relationship that extends far beyond swimming. I am grateful for her being by my side and for supporting me through this decision.”

“Furthermore, I would like to thank the amazing group of young women I have worked with at Cal for allowing me to be a part of their lives over the past two years. I look forward to following their future successes as student-athletes, and as they move on to even greater things. I have been blessed to work with so many fantastic young men and women over the years, and they have all left lasting impressions on me.”

Dunleavy worked under McKeever for the past two seasons and swam collegiately at Purdue. Prior to Cal, she assisted in various capacities at Illinois, Kentucky, and Pitt. Prior to Dunleavy, Ian Walsh was McKeever’s assistant for one season before stepping down.

McKeever, 57, is the most accomplished female swim coach in history, and just finished her 28th season at Cal.

The Cal assistant vacancy adds to the growing list of high-profile Division I positions to open up this offseason, including a number in the Pac-12; more than 10 head coaching spots are available overall. In the Pac-12, Stanford is seeking a head men’s coach after Ted Knapp stepped down last month, and Arizona will have to fill assistant positions in the absence of Cory Chitwood and Beth Botsford, as SwimSwam reported last week. Also on the high-profile assistant front, Indiana will seek new hires for the positions vacated by sprint coaches Coley Stickels and Kirk Grand.

Sad to see Sarah go. She was a great fit for the Team and Teri. Best wishes to Sarah and her future endeavors.

Best of luck to her. All that experience of learning under Teri and working with elite swimmers is now lost to our sport. That’s a bummer.

Catching the trend? Females in their late 20’s/early 30’s leaving the sport. The trend continues. Sarah is an amazing coach and person. She will be deeply missed not only by Cal, but by the entire swimming community. She’s poured so much of herself in to every position she has held. Best wishes Sarah on new endeavors in your life. Great things ahead for you!

The NCAA has a female coach retention problem.

Swimming has a female coaching retention problem! And don’t anyone blame it on women wanting to have families. It’s bigger than that.

Well that’s usually a part of it, not all of it, but a part of it that can’t be denied. It’s really difficult to have kids and coach at a Power 5 level. Especially with all the new recruiting rules that leave zero time off. Hence the number of women at a Power 5 conference school that have kids – it’s minimal. The Big Ten for example has two women coaches (I could be wrong) with kids (both at Minnesota). One has kids grown and beyond college age. The other has younger kids.

I have been coaching for over 50 yrs. still going strong. I have 7 female coaches on my staff and
4 males! I am also female! Does this tell u something???

That you’re one of the fortunate ones, maybe? And probably that you don’t coach at the D1 collegiate level.

Which Power 5 school do you work at that allows 12 coaches on staff?

Coach Klier is the director/head coach at the KC Swim Academy in Kansas City.

Why is there this assumption that it’s “harder” at the P5 level? Do the “lower” levels not work as hard or as long? I’d argue that they could work longer/harder (due to lack of income, and having to supplement that with either club duties, swim lessons, outside sources, etc).

Outliers are thrown out when conducting research. Your a great example of what to want to achieve but that does not give an accurate picture of the collegiate and overall swim world.

I’m glad someone mentioned this. While many have said women have an edge on men in the sport it’s actually a false narrative. Women and men are not equal in this sport as a profession and far from. For example, power 5 combined program, women have one position to apply for and that is an assistant role. In a split program, a women could potentially fill the head or assistant role on the womens side, but men have a shot at all four positions.

If I were a female I would see this as a dead end career where few can make it to a pay check and lifestyle that is worth it.