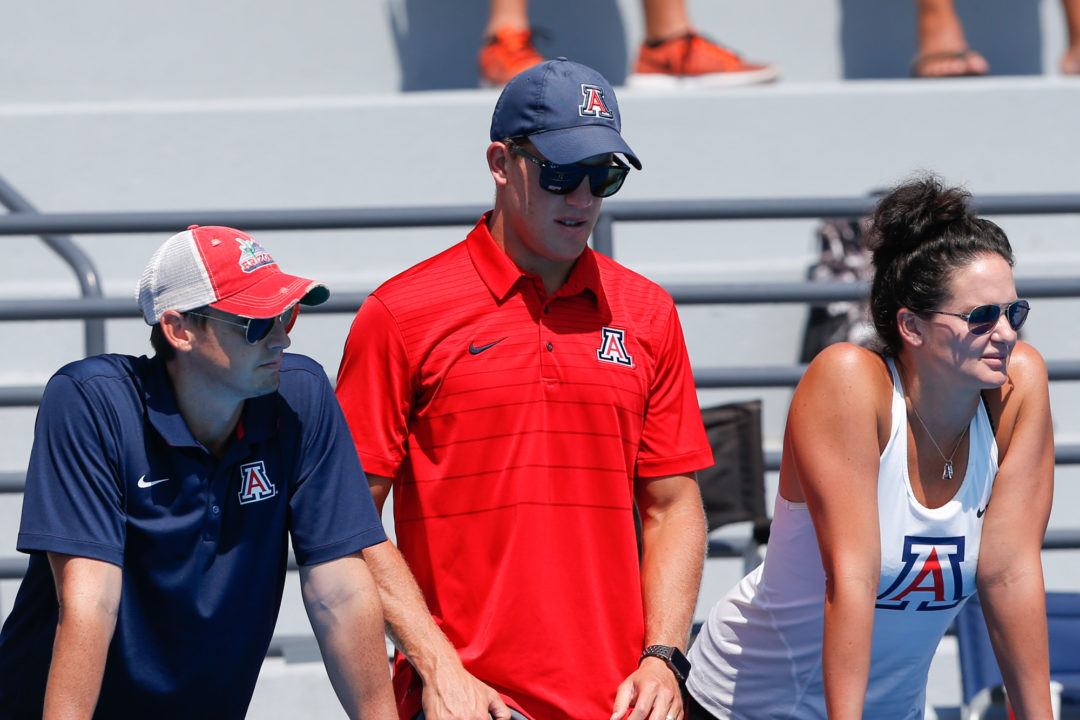 Both Chitwood (center) and Botsford (right) joined Augie Busch's staff when he was appointed head coach in August 2017. Archive photo via Tim Binning/TheSwimPictures.com

A 2012 Arizona graduate and swim team captain, Chitwood was an assistant under Busch at the University of Virginia and made the move back to Arizona with him in July 2017. At Virginia, the now-30-year-old Chitwood was the primary coach for Olympic medalist Leah Smith during her NCAA career. Smith followed him to Arizona after taking bronze in the 400 free in Rio, and has recently hit her stride in the 800, going a best time at the Richmond Pro Swim Series early in April. Chitwood, along with Indiana’s Ray Looze and Louisville’s Arthur Albiero, was an assistant to Greg Meehan on the Team USA women’s staff of the 2017 FINA World Championships.

That major appointment, coupled with his NCAA assistant coaching success, would make him a likely candidate for one of the many recently-vacated head coaching positions.

Botsford, also an Arizona alum and a two-time Olympic champion in 1996, was appointed to the coaching staff shortly after Busch was hired, and was the only woman on the six-person staff. She was previously an assistant at the University of Wisconsin. Botsford, 37, swam her NCAA career under longtime Arizona head coach Frank Busch (father of Augie), graduating in 2003, and was inducted into the Arizona Sports Hall of Fame in 2008.

SwimSwam has made multiple attempts to contact the University of Arizona, Chitwood, and Botsford for more information but is yet to receive a response.

I really hope they bring Sammy Busch in. Great Coach even better person. Would fill in perfectly given the circumstances here.

Did Beth shave her head as a swimmer?

So perhaps Leah Smith returns to Virginia and trains under Fenwick? Or heads to NCSU and trains under Bernardino (who originally recruited her to UVA). If suggested rumor is true, probably not likely that Chitwood finds a landing spot in time to accommodate Leah’s training for the summer and not likely a school like UNC will want to buy into anyone controversial.

Not sure UNC is buying into anyone at all. DeSelm’s departure really couldn’t have been much of a surprise and it’s still been over 8 weeks with no new coach and Coley Stickels taking the Bama job. Took less than 2 weeks to replace the women’s b-ball coach who departed pretty abruptly. Shows where swimming sadly seems to fit in Chapel Hill.

Jeff Dugdale will be the next coach at UNC. Wait for it.

I think a stronger Kase will be made for someone else.

Maybe she could join Ashley Twitchell and Hannah Moore at TAC Titans? Obviously, training with Katie at Stanford would also be great, but it seems like non-graduates don’t commonly join the Stanford pro-group.

Do you think frank and rocket could come in and fill those roles short term?

Could this all be a ruse so Busch Light can replace them with daddy and baby bro in an effort to save his job?

He’s a troll from UVA.

I love it when SwimSwam commenters start spilling tea.

Grabbing the popcorn and settling in for a loooong comment section.

Augie is a good man! And I liked the staff at U of A!
Being both backstrokers, maybe the two of them were just perfecting their Backstroke techniques after hours? I’m all for good coaching!

Is it normal to have a clause in a coaching contract about who you can have a relationship with? Outside of students of course. Must have been some other issues at play otherwise just ask one of them to leave.

I think if it involved an extramarital affair that could be grounds for an athletic department lawsuit. There’s some precedent for that in other sports I think.

Just thinking “in the real world” you aren’t going to get fired for having a relationship with a coworker (subordinate situation excluded) and the marital status would be irrelevant.

ppl do get fired for this stuff in real world all the time. not just boss and employee, either.

That used to be the case, but it’s becoming less-and-less common. These days, without supervisory conflict, it’s usually not an issue. Especially at larger corporations with a professional HR department managing the situation and response.

Wouldn’t an issue be that he’s a superior (Associate Head Coach) and she is a subordinate (assistant coach). Regardless, sounds like an HR nightmare.

I don’t know how their staff was structered, but I would think Augie was both of their direct supervisors. It would be odd for Augie and Cory to each supervise one person. Cory may rank higher but I wouldn’t think he was her supervisor.

And how would you pick which one to ask to leave? It’s probably best to start fresh. Also, I’m just speculating, but if there was any inappropriate contact between the two during work hours, on travel trips, using work issued devices to send inappropriate messages, etc., that could explain why their choices in their personal lives affected their employment statuses.