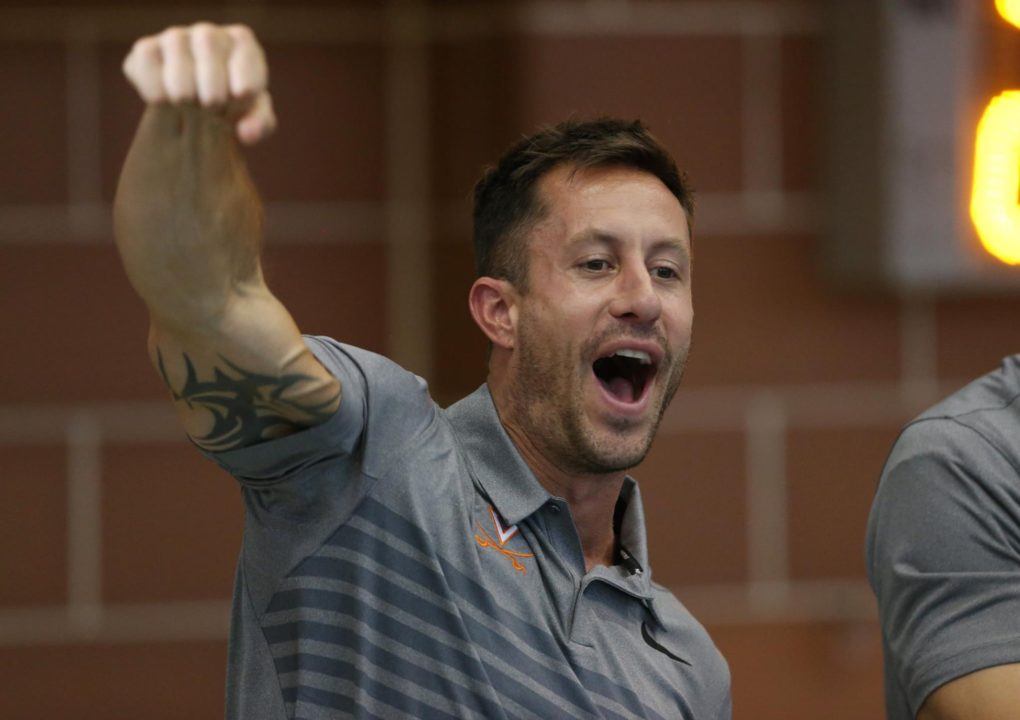 Virginia seems to have done well by stealing an assistant from a conference rival. Will UNC learn from them and go after Tyler Fenwick? Archive photo via Matt Riley, UVA Athletics

Rich DeSelm has announced his resignation as the head swimming & diving coach at the University of North Carolina, which means that we’ve already got a huge position open to start the coaching carousel. While the women were just 7th at ACCs this year and the men 10th, this is still being treated by coaches around the country as a top-tier position, given the program’s history and resources.

It’s likely that the position won’t be filled until after the NCAA Championships, but that doesn’t mean that it’s too soon to take a spin on the coaching carousel. Below is a list of possible candidates for the position.

Note: this is editorial content, based on rumors, speculation, and conjecture. None of these individuals have indicated to me that they are or are not interested in the position.

Below, we’ve handicapped the field. Who else have we missed that belongs on this list? Leave it in the comments:

No Queens Jeff Dugdale? He’s built a team basically on par with power 5s in there backyard, in D2 with less scholarships, and a micro budget.

Yeah lol but UNC knows that the kids he’s getting in to Queens wouldn’t get past the weedout at UNC admissions.

Also why do people keep saying that they’re like a power 5? Their 400 free relay that won NCAAs last year would have lost to Duke who has no scholarships at ACCs. So when we say “like a power 5” do we mean like Michigan State? Because bruh…

I believe Queens had the 2nd or 3rd highest GPA in the country last year for D2. They stretche the dollars they have with academic scholarships. Many of there swimmers have gone on to big time graduate programs. They also beat South Carolina in a dual meet this season. Could you imagine what they could be with 6 more scholarships. It would add allot of depth on that relay. As for who’s he’s coaching; you have no clue what your talking about. They live and train on campus attending Queens classes everyday. How is David and/or all these swimmers transporting back and forth coast to coast everyday. Just because Queens is embarrassing and exposing allot of bad D1 isn’t a… Read more »

2) I did not say that the Queens swimmers are going back and forth from NC to San Diego everyday. There are these things called online classes…

Ok, I ignored the first time….but it’s “their,” not “there.” You’re not your. Allot is not a word. Besides, Queens gets a lot of international swimmers. Maybe not scholarship, but they go there for free, somehow.

Umm…. what?? Have you met the basketball or football team? They can get dummies into the school for athletics, that is NOT an issue for them.

I think it’s mostly certain that UNC will indeed be extraordinary given the right coaching staff and organization. Swimming is basically the only sport at UNC that’s not near-or actually national champions. It’s actually quite bizarre that up to this point UNC has been so awful…Rich was good his first years..I think his recruiting skills were like, 0/10…..the school is top 30 academically, fulllllllly funded (and then some- some of the best student-athlete resources in America) and has a gorgeous campus. It would seem like a no brainer for people also considering schools like UVA, Michigan, etc, but they need the clout and background success for which those schools have worked very hard, which takes time, of course- but is… Read more »

Hate to rehash this, but D2 just wrapped up last night. I’ll just leave this here: 2:49.98. That’s faster than the other school from Michigan last year. Because bruh…

You think Jeff Dugdale or David Marsh is coaching Marius Kusch? I suspect Kusch was back in San Diego not long after the Bluegrass Conference Champs…

Probably because of Baker…. just saying

If anything, it’s John Long coaching him under the guidance of Bob Groseth. Jeff has had a long string of assistant coaches in a short amount of time.

I would be interested to know how you define “long string”?

Real talk i finally feel the need to jump in after reading this non sense. My assistant coaches in our 9th year were:
1. Mallory Houchin – went on to NC State
2. Jon MacColl – the youngest head coach in the big ten at Rutgers at the time
3. Peter Verhoef – head coach of Bolles
4. John Long has been here 5 yrs
5. Bob Groseth 3 years
6. Julia Czentye 2yrs.
7. Matt Johnson – head site coach Team Charlotte

I would suggest looking into Kusch’s progress over the past few years. He’s improved to a large degree since he started training at Queens in 2015. While yes the likelihood of him training with Marsh is pretty high, given the fact that he was still in Charlotte at the time, he definitely had his worst summer last year when he moved out to SD and was with Marsh full time. Jeff Dugdale and John Long deserve all the credit when it comes to coaching Kusch and I believe that will become evident when we see what happens once he’s graduated.

While athletic scholarships might be less (in official numbers), I’m guessing Queens has some different academic scholarship rules compared to UNC….

Why am I getting the impression that “COACH” is actually Jeff Dugdale? Classic!

Because your a hater

He sold the concept of training with Marsh before NCAA champ wins and how he built the program after he started…..pass

Brian Smith would be a good hire. It would also open up a sprint coach job at Georgia

Yes I agree. Look no further then Carol at Texas, I think she is producing a national contenting team in a few years and she comes from a long tenure at Georgia. He at least deserves a good look. My only problem is he is a sprint coach and I cant say they are know for sprinting. Especially this year the boys have no sprinters and girls really just have Veronica who is better at the hundred. They did have Smogs and few others, but overall not top tier. Georgia much more know for producing middle distance people.

Happy to read several woman names on this list

It would be great to see a woman rise to the top of this list.

I’ll do it they need help

Senior National Coach Korey McCulley is the best coach in NC hands down. Especially during the summer when he grows a full beard. I believe they’re currently getting ready to rename the addition to the GAC “The McCulley Aquatic Emporium”. If it wasn’t for the 10 yr non-compete he signed with enfinity he would have already considered the position.

His turtleneck game is unparalleled as well. UNC would be fortunate to have such a fashion forward coach on their pool deck

No question regarding McCulley’s coaching prowess, but the man is still bitter over Roy’s decision to leave Lawrence and return to Chapel Hill fifteen years ago. Bubba doesn’t need or want that kind of tension within the athletic department. His beard game is pretty cool, though.

Good point @DisturbingBehavior; however, it has been noted that K McCulley has been seen in the gym (rumors of him registering for the 2019 crossfit open). With his new Antonio Banderas-like physic, it is quite possible that Bubba would look past the differences as recruiting would skyrocket under this god-like presence.