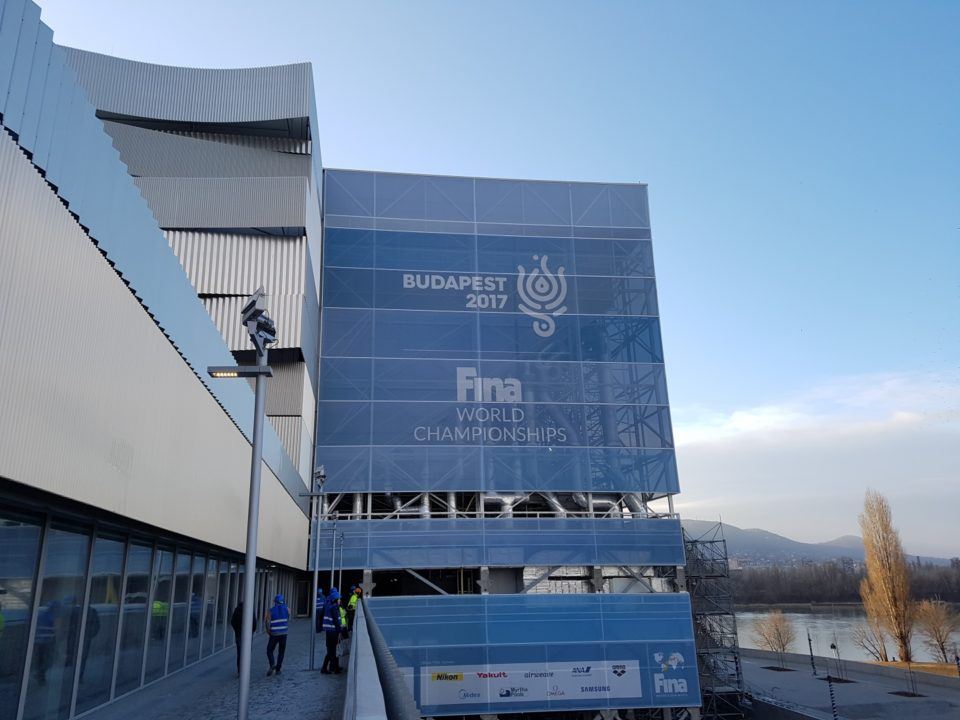 According to a tweet sent out by Balázs Fürjes, the Chairmain of the 2024 Budapest Olympic bid, the official competition pool at the Dagály Aquatics Arena in Budapest that will host both the 2017 World Championships and the masters World Championships has been filled with water.

Water in the pool, Aqua is our World ????????Final touches on brand new Budapest Aquatic Centre for @fina1908 @finabp2017 pic.twitter.com/QhbmmDr9Uv

The pool will feature the best in the world from July 14-30 in Budapest, Hungary from all over the world as they gear up for the countries first time hosting a major international swimming event.

The event is the biggest competition on the 2017 swimming calendar and according to FINA there’s been an unprecedented interest during the early bird sales in tickets for the event.

Much of the interest has been driven by Hungarian swimmer Katinka Hosszu who earned the FINA female swimmer of the year award for her performances in both the FINA world cup circuit and the Olympic Games.

Hosszu will be competing on a home stage  this time around. Olympic medallist Laszlo Cseh from Hungary is also expected to be competing.

The FINA World Championships will play host to all aquatic sports including diving, synchronized swimming, and water polo.

Hmmm. That’s probably a good thing because it is a pool.

There is a story of one exceptional swimmer who was expected to be super successful at home stage at the biggest event in sport. The failure to meet expectations led to immediate retirement.
Hint: the home stage was London in 2012.

Not exactly a fair comparrison. Muffat and Schmitt had the meets of their life and Adlington has never gone near the gold and silver winning times in a textile suit. Her 800 wasnt great, but she couldnt have beat Ledecky even at her best.

I think Rebecca did pass her 08 400 & got within 2 secs of her 800 . The LzR really suited her but she did maintain her rankings in textile with world titles .

If you’re talking about Adlington, I wouldn’t call winning and olympic bronze medal a complete failure…

Just watch one more times this race https://m.youtube.com/watch?v=JHbNKX3VkIM and listen to the English broadcaster.
The expectations were above the roof with Adlington being a heavy favorite at lane #4 and royalties presence. It was the most terrible split of Ledecky at 800 (4:04-4:10). She has never swum this distance same way anymore. But such surprise attack has worked forcing Adlington and Friis to swim at high-tech world record pace the first half of the distance and struggling with the second half with 4:16 and 4:19 respectfully. Adlington managed very gracefully the defeat, but such a split at Olympic final was a failure in my opinion.

Why be so cruel to Rebecca Adlington ? They never expected the Beijing success & being a shy person she did have trouble with the fame & domestic pressure . When harried by a reporter about winni g in London , she replied that especially in her events & at the Olympics a 15 year old could come out of nowhere . This is what happened & she was very gracious & happy with her bronze .

She was always going to retire & the London Olympics were not put on for just Becky .

I’m not sure that your citation of Rebecca Adlington is quite accurate. She did said something about teenagers that she has to compete against but it was said in post- Games interview in the connection with her retirement decision. It actually doesn’t matter now. If the decision about retirement was made before Olympics then definitely she wanted to put an exclamation sign at the end of her career.

Adlington has a gold and a bronze from the Olympics. She put herself out there and achieved what a tiny minority ever have. I think someone (like you) who hasn’t won any Olympic medals has no room to criticize someone who has.

No doubts, you deserve your name. You know how to hurt where the pain is unbearable.
I will never be an Olympic Champion and will die with unfulfilled childish dream. I will never under any circumstances wish such a terrible thing to my worst enemy.

Thank you for clarifying that you weren’t criticizing Adlington. I apologize for coming back strongly to you.