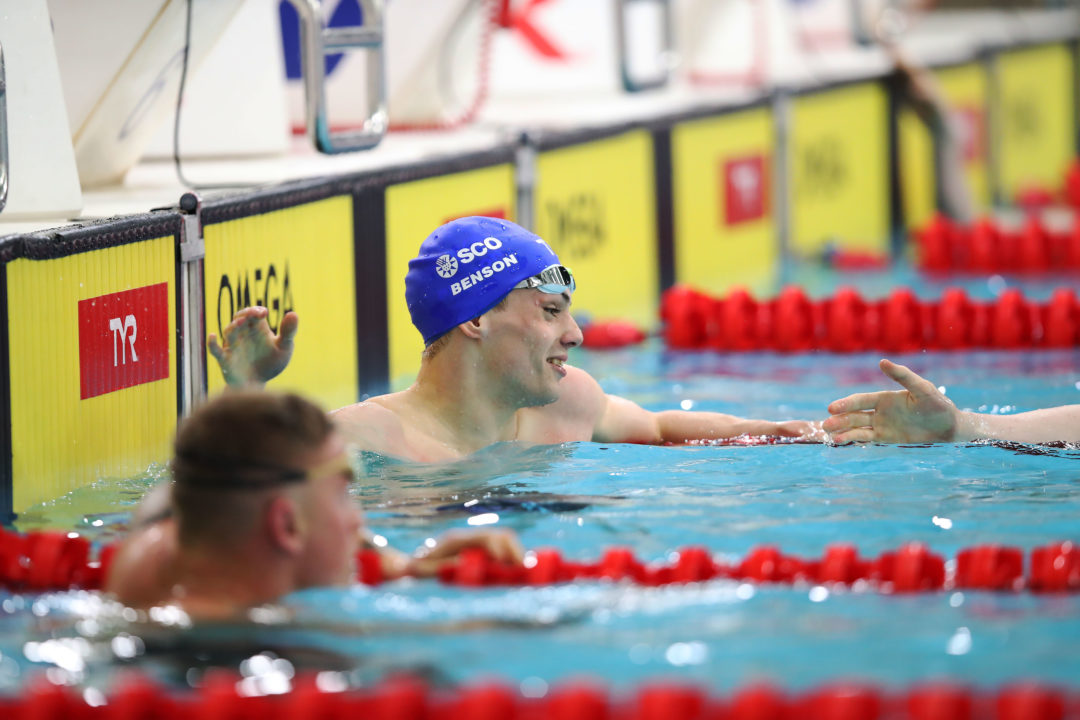 British Swimming has conveyed that a working group is already dissecting the UK government's advice and guidelines for overall societal reopening. Archive photo via Ian MacNicol for Scottish Swimming

Earlier this week we reported how United Kingdom Prime Minister Boris Johnson announced the nation’s conditional plan to reopen society on Monday, The 51-page plan document’s 3-step roadmap offered up an indication as to when pools will be back up and running.

British Swimming has now released a statement concerning its takeaways from the plan, conveying that a working group is already dissecting the government advice and guidelines.

“Given the unique and complex nature of the situation, we will undertake a thorough piece of planning to ensure we get this right,” reads the organization’s release.

British Swimming goes on to say that elite training centres will be able to open before club programs. That’s timely good news for the likes of Holly Hibbott, Freya Anderson and others who recently made their moves from their long-time clubs to the National Training Center at Bath.

In the meantime, beginning yesterday, May 13th, marked the return of open water swimming. Participants need to make sure they follow current social distancing rules and express caution when swimming in open water.

“Naturally I welcome this update and thank our partners at the DCMS, PHE, DHSC and UK Sport, along with our fellow National Governing Bodies, for their work on this. It’s important that now we have this guidance, we take our time to get the implementation right. Whilst this first phase of ‘returning to training’ is an important step for our elite squad of athletes across the aquatics disciplines, I understand the wider aquatics community will also be keen to get back in the water, but for now I encourage you to be patient as your time will come, in the hopefully not too distant future.”

And here we go again. While I appreciate that British Swimming’s only remit is performance swimming (ie securing funding by winning medals) the fact that they will once again hand pick whomever they please falls in line with their garbage selection policies. Choose not to swim in one of our dysfunctional ITC’s? Sorry, you won’t get to train for another 6-8 weeks if you are lucky. You stay classy BS, heaven forbid you do something right for once.

It’s British Swimmings dream. Instead of hand picking the team and leaving home event winners at trials they can just hand pick who gets to train and side step all that.

Australia is no better.

I know of a swimmer who was threatened with funding cut offs if they didn’t move to a podium centre. After leaving their long term coach they never made the team again.

British swimming: Right we can only select serious contenders for the olympic team. The best of the best
BS: Yep its serious this time no jokes
BS: 100% Only the best this, virus is serious.
.
.
.
BS: Right to start with Nick Pyle?
Yep,
Yeah,
Yes,
Was it even a question?

The good news is that open water is permissible for everyone & The GB’s waterways are the cleanest they’ve been since The Industrial Revolution .

Why not get a open water or tri wetsuit , organise an old fashioned long slow distance aerobic session . 5 swimmers , 1 kayaker on a set course , either point to point & run back or return .

No matter your level there will be n o serious competition till 2021 . Relax & enjoy the experience .

Not allowed 5 swimmers. Only 2 can be together at any one time. No club training allowed in OW per Swim England.

Does not need to be club organised. I’m sure one can do it . Mix up the numbers ,add a kayaker , space it out .
If you are going to get arrested , it is certainly one in your favour . I got arrested for swimming !