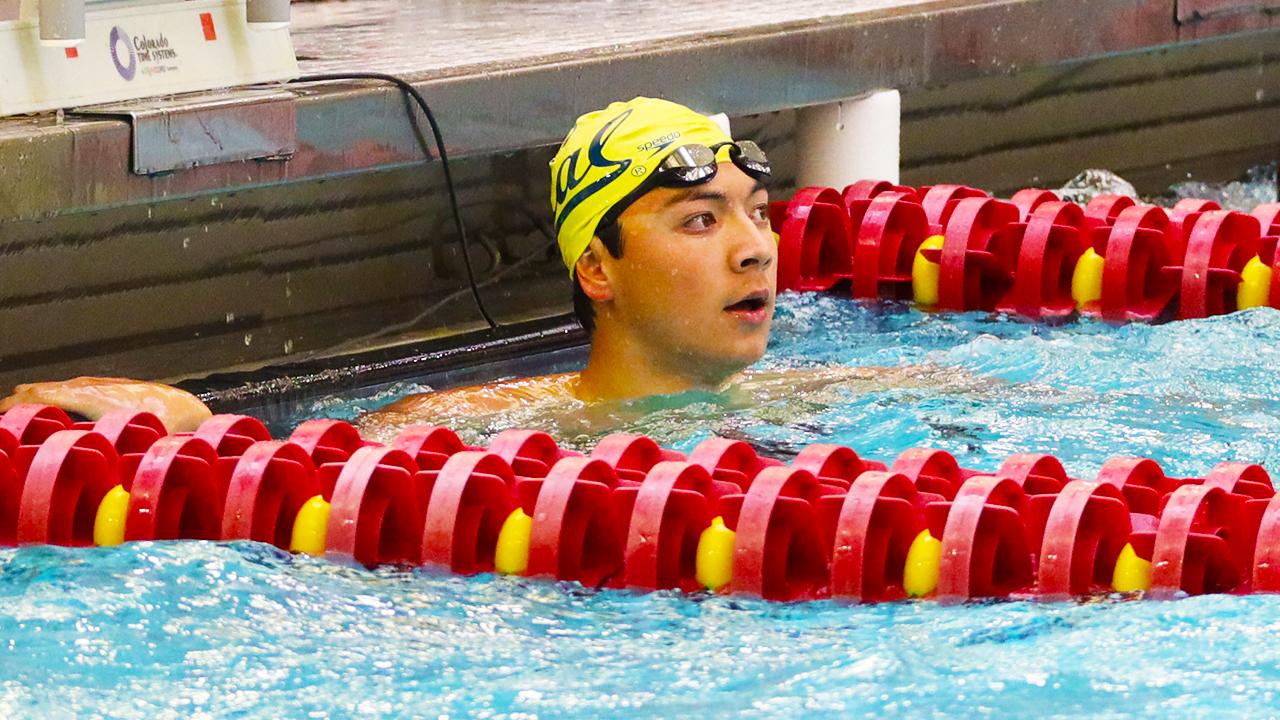 Gabriel Jett now has double digit victories in his freshman campaign, including a new lifetime best in the 1000 free on Friday. Archive photo via Coleman Hodges/SwimSwam.com

Emma Davidson, who was on both of Cal’s 11th-place sprint free relays at the 2022 NCAA Championships, has entered the transfer portal.

Bloch has been a member of the USC coaching staff for the last eight seasons, but says it is now time for him to transition to something new.

Moore has worked as an assistant coach for the last two seasons with the Cougars.

The Cal men rolled over the University of Arizona Wildcats on Friday at the Spieker Aquatics Complex, winning by a margin of 173-80. That is a 9th straight win for the Cal men in the series, and moves them to 33-8 all-time against Arizona.

The Cal men exhibitioned the last individual and last relay events of the meet.

Individually, Cal freshman Gabriel Jett continued to be a revelation for the Golden Bears.

While Jett was a “Best of the Rest” ranked recruit coming out of the class of 2021, he has been one of the top performers in this year’s freshman class thanks to big drops already.

Jett has the pedigree – his parents Scott Jett and Kristie (Krueger) Jett combined for 31 All-America honors while at Auburn – to continue his progression. As the Cal men scratch-and-claw to make up ground on the defending NCAA Champion Texas Longhorns, a few points from an unexpected place, like Jett, could wind up making a big difference come March.

Jett now has 10 event wins in his college career already, including a 200 free victory at the Minnesota Invitational in December, where Texas also raced.

The Golden Bears opened the meet with a 1-2-3 finish in the 200 medley relay, led by the group of Hugo Gonzalez, Reece Whitley, Trenton Julian, and Jack Alexy. While timing errors mean we don’t know exactly who split what, there are still some interesting developments as Cal goes through the season. One is Gonzalez on the backstroke leg and Julian on the butterfly leg.

Both swimmers are not known for their pure-sprint abilities, and neither was on the “A” 200 medley mid-season, but both swimmers have progressed over the last year or so in that sprinting – mostly demonstrated at non-collegiate meets.

Gonzalez, for example, who is a 400 IM contender at NCAAs, split 21.83 on the leadoff leg. That is only .07 seconds behind Daniel Carr, who is Cal’s usual leadoff, and who led off the team’s mid-season medley relay.

This gives Durden options for championship season, to play the hot hand, to balance between the two day 1 relays, and to help balance the workload across his team. Relay selection will be critical for the Golden Bears in March, as they lost their relay hammer Ryan Hoffer to graduation after last season.

Besides Jett, Cal had only one other individual multiple winner at the meet as part of a broad-reaching and dominant performance.

While Cal won 14 out of 15 events on the day, the Wildcats didn’t totally strike out at the meet. Sophomore Jake Hand won the 200 breaststroke in 2:01.37. That his second win of the season and 4th of his collegiate career so far.

The meet also saw the NCAA debut this season for Olympian Bryce Mefford. Mefford wasn’t on the Cal roster for the fall semester, and the school was being coy about whether he would participate this season for his bonus 5th year. In the new semester, though, he was officially added to the roster, and raced in the meet on Saturday. He swam 48.07 in the 100 fly, which was the third-best time of the meet, but was part of the Bears’ exhibition lineup.

Cal races again Saturday against Arizona State, while Arizona will head to Stanford.

I think covid just impacted how much fast yards racing was really available in California.

No one paying attention is surprised Jett is going fast after he was 1:47/1:57 free and fly long course last summer.

Durden might be able to coach a lick or two…..

Amen. When was scoring shut off?

Hoping Whitley will rebound, after not performing at the heights we thought he’d be… but then I look at Forrest, and I have to wonder what the heck is up with the breaststroke crew? 55.5 is not good enough, even in heavy training.

U of A, what a state of disarray. Oof. They’re going on the better part of a decade being bang average.

Agreed. Arizona men and women are bad. Time for Augie to go.

Jett led the Bears’ rout of Arizona en route to rerouting the Wildcats back home to Tucson, devastated.

Oh, they managed to “route” them, did they? Sorry to be that guy, Braden, but I couldn’t help myself.

Gabe Jett is something special.

Jett is progressing really nice but a 9:02 is not that fast. Hobson and Johnston were both 8:48 and would have beat him by over a length.

It was a dual meet chill

A lot of fast guys go this time in duals

Jett gets all the run, while Hobson, another frosh, is putting up better times. Hobson is more of a d guy, while Jett seems to be more of a middle d guy. What other fast guys go 8:48 in duals? You say there’s a lot of them.

I’ll answer for you. That would be none except Finke. Jett does the 27th best time in a 1000 and gets a homer article written about him.

And Hobson got an article written about him too yesterday. I don’t get what you’re upset about

Oh man I missed the article. My bad. I’m sorry

Jett is certainly proving to be incredibly versatile. He certainly seems to be a 200/500 free guy, but is putting up butterfly times in the 200 and even 100 yard free times that make him incredibly valuable at conference championship and a real score threat at NCAA

Hm still no Liam Bell. He doesn’t appear to have competed very much this year besides a couple times in the fall. Cal will need him healthy imo if they are to take down Texas