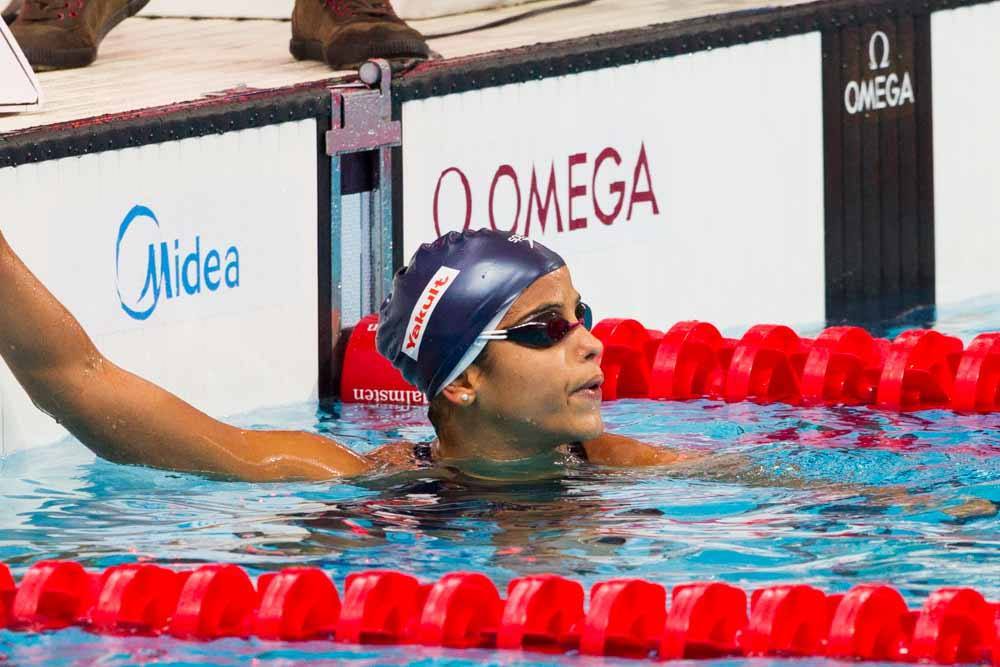 GloboEsporte.com is reporting that 2016 Brazilian Olympic Team member and World Record holder Etiene Medeiros has failed a doping test. She tested positive in a sample taken on May 8th during an unannounced out-of-competition test. Best Swim is reporting that the test was for the substance fenoterol, used to treat asthma, and both her “A” and “B”samples returned positive.

Neither the swimmer nor her coach are commenting to the press at this time, but Medeiros’ press office said, Medeiros is “quiet and determined to set the record straight and prove her innocence. Meanwhile, she will respect all  the limitation imposed by sports authorities.”

Although the Brazilian Swimming Federation (CBDA) has yet to release an official statement, Medeiros’ club, SESI-SP, issued the following concerning the news:

“The swimmer Etiene Medeiros is one of the SESI-SP pride. World Champion, gold medal at the Pan American Games and record holder in several events, Etienne is an example for hundreds of athletes and thousands of students from SESI São Paulo. His career, a history of effort, dedication and seriousness, shows that it is worth betting on sport and invest in the education of our youth.

We, the SESI-SP family, are on the side of our athlete, and cheering our champion, who will represent us at the Olympic Games in Rio and fight for more medals for Brazil. “

Medeiros’ breakthrough performance came in 2014 when she became short course World Champion in the 50m backstroke, clocking a world record in the process and becoming Brazil’s first ever female World Champion (or individual female Worlds medalist). She went on to become the first Brazilian female swimmer to win swimming gold at a Pan American Games with her 100m backstroke victory in Toronto last summer.

Medeiros was on the psych sheets to compete at last week’s Mare Nostrum circuit, but withdrew from racing as a result of what at the time was called an asthma problem. The 25-year-old is slated to contend the 50m and 100m freestyle events, as well as the 100m backstroke at the Olympic Games.

she has asthma and is guilty of taking asthma medication?????

RJ Cid – we have no independent verification of her asthma status that we’ve seen. In any case, there are many substances that are medically approved to treat certain conditions but not allowed by the World Anti-Doping Code. Because of the nature of asthma and asthma treatments, many asthma treatmenst fall under this category. Athletes can get a Therapeutic Use Exemption (TUE) for some banned substances to treat legitimate conditions, but generally that exemption must be applied for before the positive test, not ex-post-facto.

There are some details that need to be sorted out here still. As of now, all we can report with certainty is that she tested positive for a banned substance typically used to treat asthma.

According to the most recent news the mistake was that the doctor did a mistake on the TUE (Therapeutic Use Exempection) of Mare Nostrum not citing that Medicine.. Seems that on all other TUE of her from other competitions the Info was correct..

are you biased maybe? she didn’t swim the mare nostrum and tested positive at some other point.

I am just passing the Info I received.. I am not making a judgement..

Maybe the info was wrong about the Mare Nostrum part.. but it seems pretty reliable that was a TUE related problem (Then again I am not judging and saying she is guilty or not)

Im sure the athlete is also required to sign the TUE. It would be a huge loophole if the athletes didnt have to sign it and then could later bring up the defense that they never saw what was on the paper that was filed. They are the ones responsible for reporting what goes into their body.

Maybe she has so many medications listed on the TUE form that she lost track! That must be the answer how else could you make a mistake and omit your only medication.

In the WADA IC report that was just released last week, Over the course of almost 10 years, Sharapova was using 30 (!!!) different substances under the care of Dr. Skalny (there you go, another doctor you can get your “proper documentation” from), including Magnerot, Riboxin and Midronate (meldonium).

So good luck in thinking Efimova is going to swim “clean” in Rio!

Many elite swimmers claim they have asthma so they can take TUE, opening the door to many performance enhancing drugs not available/legal for non-asthmatic swimmers.

If she does indeed suffer from asthma, this reminds me of Rick DeMont.

According to Wikipedia, Fenoterol is a β2 adrenoreceptor agonist designed to open up the airways to the lungs. It is classed as sympathomimetic β2 agonist and asthma medication. My understanding is that besides opening airways, it acts like adrenaline, increasing heart rate and muscle contraction power for short periods of time. Probably why it is banned and why it might be popular with shorter distance racers.

Which may partially explain her incredible progression in the past year or so.