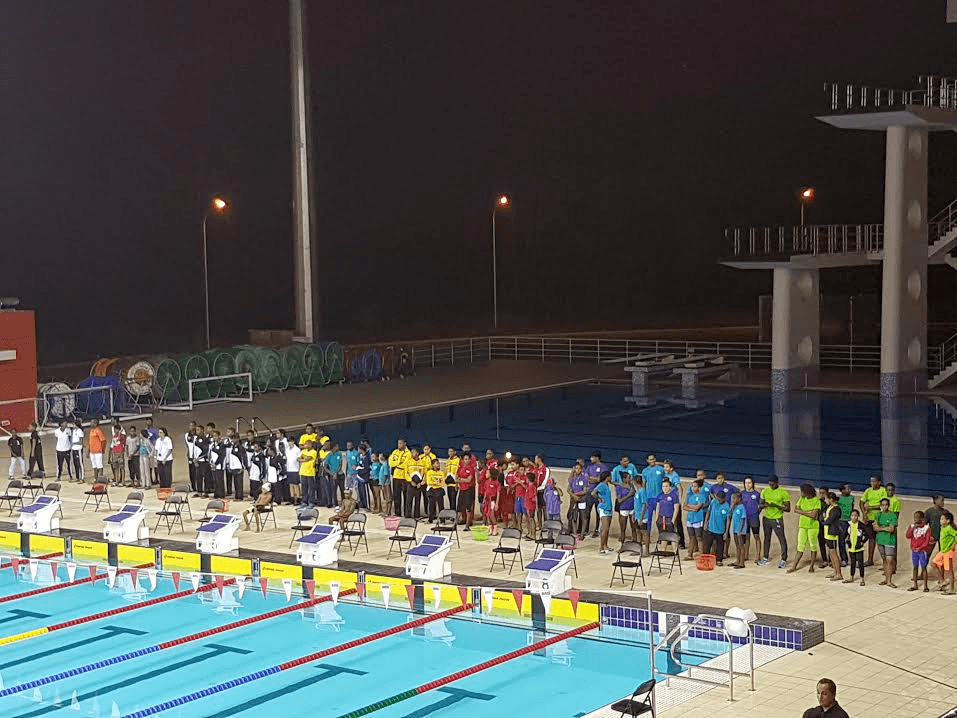 Nikoli Blackman of Marlins and Kristin Julien of Arieos Aquatechs etched themselves into the National Record books with impressive swims... Current photo via ASATT

Nikoli Blackman of Marlins and Kristin Julien of Arieos Aquatechs etched themselves into the National Record books with impressive swims on Day Two (Friday) of the National Open Short Course Championships.

The meet was officially opened yesterday by the President of the Amateur Swimming Association of Trinidad and Tobago Mr. Wendell Lai Hing following a March Past of participating teams. Lai Hing thanked all those who were in attendance for their participation, and to a lusty applause announced the all National Meets would be held at the National Aquatic Centre, the new home for Aquatics.

Blackman and Zarek Wilson of Blue Dolphins fought tooth and nail to the end, and when the white water had cleared, Blackman established a new 9 – 10 200m freestyle male mark of 2:11.51 to win gold with Wilson just behind in 2:11.62. Both athletes went under Blackman’s record of 2:15.39 which he set at the opening of the National Aquatic Centre in October.

Wilson and Blackman have had impressive success in the 200m free with both athletes holding the record at varying times during the year, with the record as at July being 2:20.36 set in 2008 by Jabari Baptiste. Later in the evening, Wilson turned the tables on Blackman in the 50m backstroke and 100m breastsroke events. Wilson won the 50m backstoke in 33.66 while he won the 100m breaststroke in 1:26.33.

Julien was apparently discontent with her record performance of 29.63 seconds 50m backstroke from Thursday evening, and smashed her own record establishing a time of to win in 28.87 seconds. This swim earned her the honour of being the first T&T female swimmer to dip under the 29 second barrier in the 50m backstroke short  course event.

UTT’s Amira Pilgrim established a new meet record in the 100m fresstyle female. The multiple regional medallist sped to the wall in 56.84 seconds, erasing Sharntelle Mc Lean’s old mark of 57.31 seconds. Pilgrim was perilously close to the 15-17 girls national record of 56.66 which is held by Olympian Siobhan Cropper since 1995. Jeron Thompson of Atlantis Aquatics was a triple gold medallist on the evening winning the 200m individual medley (2:15.51), 100m freestyle (52.29) and the 200m breaststroke (2:25.11).

10 & under females saw three different winners on the night. Neishelah  Caseman of Tidal Wave Aquatics won the 200m freestyle (2:27.36) while her teammate Gabrielle Vickles won  50m backstroke (33.53). Zoe Anthony of Marlins was the victor in the 100m breaststroke in 1:29.11.