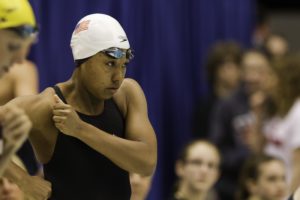 Lia Neal (above) will be hungry for a national title as the fastest returning 100 and 200 freestyler in the NCAA this year. 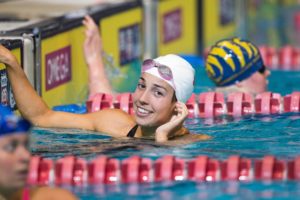 Maya Dirado has been on a roll for the last six months. What will she do for the Cardinal in 2014? 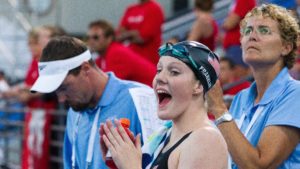 This shot captured ominously a then 15-year-old Missy Franklin with her future coach Teri McKeever (right). Did Missy and the crew capture the #1 class ranking? (Photo: Tim Binning/TheSwimPictures.com)

Leah Smith of the JCC Sailfish is a part of a very good recruiting class for the Virginia Cavaliers. (Photo: Tim Binning/TheSwimPictures.com)

Grace Carlson
Grace Carlson is an Oregon-born swimmer studying at Stanford University. Carlson is a freestyle, backstroke and IM swimmer who competed at both the 2008 and 2012 U.S. Olympic Trial competitions. After being put into swimming lessons at 8 years old, Carlson joined club swimming by 10, and by 12 years old she made a 2008 Olympic Trial cut and competed as the youngest qualifier there. She’s currently in her sophomore season as a Cardinal, and is undecided on a major. In her club swimming days she competed for Tualatin Hills Swim Club and graduated from Woodrow Wilson High School near Portland. Just prior to committing to Stanford, Carlson moved from Lake Oswego Swim Club where she swam her fastest times in the 100 and 200 backstroke as a 13-year-old. According to collegeswimming.com Carlson was the no. two recruit out of the state of Oregon and one of the top in the country. She didn’t compete in high school swimming during her freshman and sophomore seasons, but she chose to get into the mix for her upperclassmen years.

National Competition
Carlson was the youngest competitor at the 2008 U.S. Olympic Trials, and she qualified four years later for the 2012 U.S. Olympic Trials. As a student at Woodrow Wilson High School she lettered her junior and senior season, and was voted team MVP both years. She was a two-time All-American, and state champion in three events including: the 50 freestyle, 100 backstroke and 200 freestyle. She also broke Class 5A state records in the 200 freestyle and the 100 backstroke.