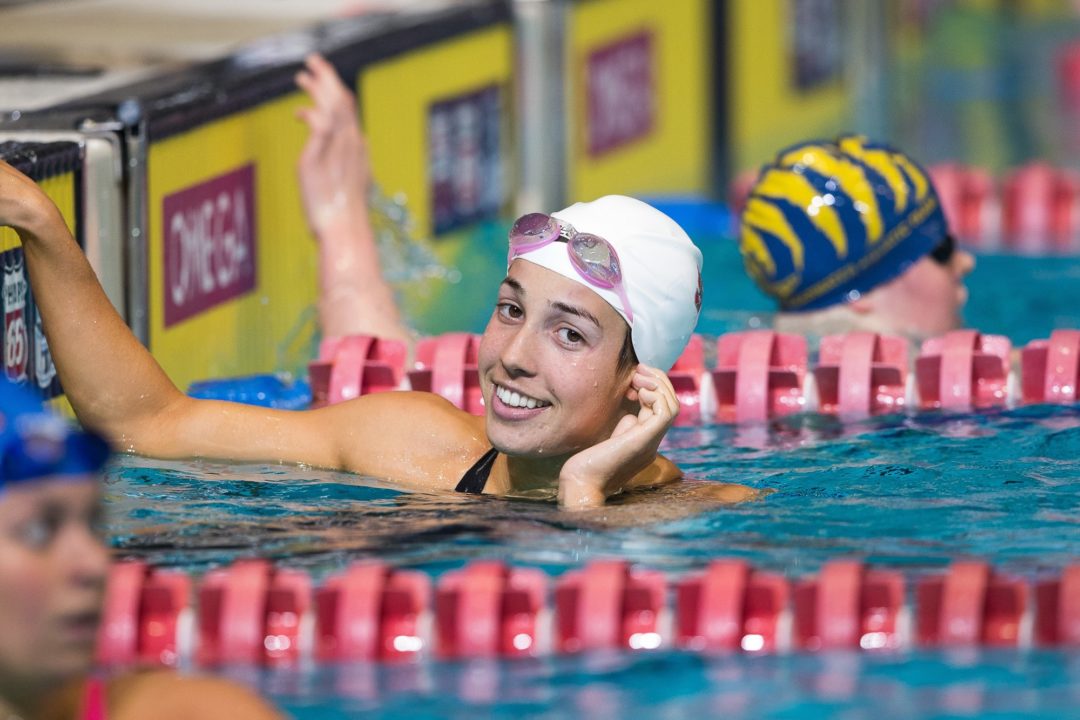 Maya Dirado has been on a roll for the last six months. What will she do for the Cardinal in 2014?

In a vacuum, Stanford’s 2012-2013 short course season could be viewed as a disappointment.  The team finished just 8th at NCAA’s, their lowest ever finish since the inception of the program, and didn’t reach the top of the podium in any event.  All factors considered, however, the first year of the Greg Meehan era was a huge step in the right direction, highlighted by an upset victory over USC, Cal, and Arizona to win the PAC 12 title, the quick recovery/revival of Felicia Lee off shoulder surgery, and the impressive development of a “middle tier” group that should contribute big time this year.

There was a fair amount of uncertainty prior to Meehan’s arrival.  Apart from a few bright spots, the Stanford women were pretty disappointing at Olympic Trials; after having multiple medalists at every single Olympics in the last 40 years, the women didn’t even send anybody to London.  The fourth place squad from the 2011-12 season was led in large part by a multi-NCAA champion and American record holders Sam Woodward and Betsy Webb, who accounted for 59 individual points and 8 huge relay swims.  The loss of Woodward and Webb, combined with the lack of incoming freshmen that could immediately contribute in the sprint events, meant the 2012-13 team (and future squads, with Andi Murez being a senior) had some serious question marks in the sprint ranks.

Thanks to the development of some unusual suspects (Alex Whitford, Annemarie Thayer, and Allison Brown, among others), and big performances by their seasoned veterans (Andi Murez, Maya Dirado, Felicia Lee, and Maddy Schaefer), Stanford stole the PAC 12 team title, and put together an impressive NCAA’s considering their severe lack of depth.  Murez was a workhorse for the Cardinal in her final season, making the A final in the 200, finishing 10th in the 100 free, and swimming on all five relays at NCAA’s.  Dirado came away with two wins at PAC 12s and a runner-up finish in the 400 IM at NCAA’s (she was narrowly edged by Florida’s Elizabeth Beisel).  Schaefer had a career year in her sophomore campaign, putting up lifetime bests in her top three events, including busting the 22 barrier for the first time for a top four finish at NCAA’s.

A big story from last season for the Cardinal was the surprising return and improvement of junior Felicia Lee, who was sidelined following surgery in July 2012 to repair a torn labrum and rotator cuff.  Seeing Lee return to the pool wasn’t particularly shocking so much as how she performed when she came back.  The North Baltimore Aquatic Club product was better than ever after just six months away, swimming in-season bests shortly after returning and lifetime bests at NCAA’s.

Overall, the Cardinal largely surpassed expectations, and with a staff that has proven it can develop new talent and advance already-elite swimmers, they have set themselves up to make run for a team title in the next few seasons.

At the risk of repeating ourselves, we’ll keep this section short.  Stanford’s top four chances this year hinge largely on seniors Maya Dirado and Felicia Lee.  After a breakout summer where she qualified for Worlds in three events, Dirado has become a household name in USA Swimming.  She has largely played the role of bridesmaid each of the last three seasons, battling Olympic/World Championship medalists Caitlin Leverenz, Elizabeth Beisel, Elizabeth Pelton, and Katinka Hosszu in a loaded IM field.  With the additional confidence boost from this summer, look for Dirado to challenge for some titles in her final campaign.

Lee, the other half of the 1-2 punch, had a career year in 2012-13, and built off that with a great summer.  After looking like she had plateaued a bit from her dominant days as an age grouper, Lee dipped back under :59 the 100 fly for the first time since 2010, and posted long course bests in the 100 free, 100 back, and 200 back.  She proved to be one of the country’s most versatile swimmers a year ago, and will be looking to build off of that…

While Stanford will need big performances from Schaefer and Neal, ultimately, their fate at NCAA’s lies in the hands of these two.

To jump into the top four, the Cardinal will be looking for big performances from their next level swimmers:

Stanford’s senior class wasn’t a particularly deep one, but they did lose Andi Murez, a perennial All-American.  Murez was a staple on Cardinal relays all four years, winning multiple NCAA titles and setting a couple American records.  Lucky for Stanford, that graduation gap can easily be filled by Maddy Schaefer and incoming freshman superstar Lia Neal (more on that below).

The otherwise thin Stanford sprint group gets a big boost from Olympic bronze medalist Lia Neal, who competed for Team USA on the American 400 free relay in London.  Neal didn’t quite have the results we expected this summer (she failed to final at World Championship Trials), but she did have a fantastic senior short course season.  She was 22.4 in the 50 (would have just missed making it back at NCAA’s), 47.9 in the 100 (good for an A final), and 1:45.5 in the 200 yard freestyles (B final), and she can immediately take Murez’s spot on all three free relay.

Joining the Class of 2017 off the boards is Kassidy Cook, the number one diving recruit in the country.  The Woodlands, Texas native has won multiple Junior National titles on both springboards, and just barely missed the Olympic Team in the 3-meter at the Olympic Trials (she finished 4th).  She has shied away from the platform in recent years after suffering a dislocated shoulder back in 2012, but she could still dive a reduced program off the 5 and 7 meter platforms to score at NCAA’s (as Kristian Ipsen did back in 2012 on the men’s side).  Expectations from the farm are that she should be a top three  NCAA finisher off both boards, with potential to land on the top of the podium.

Cook will have the benefit of practicing every day with rising senior Stephanie Phipps.  Phipps won the 3 meter diving event at the 2013 PAC 12 Championships, but didn’t compete at the 2013 NCAA’s.  If she comes back and makes it through zones, she should land in the top 8 at the big meet.

Stanford finishes in the top 3 if…

Stanford is back down in the 8th spot if…

Miss DiRado has a great year so far. I hope she will finally win an individual title. She deserves it after so many second and third places.

This is a good look at Stanford. I must say that if you look at Lia’s times (check the Junior National posts) and not her placement– she didn’t have the debacle of a summer that people on this site have suggested (more in the comments). I don’t think she’ll have to “rebound” that far to be a major asset to Stanford. I also think that Neal and the other freshman can have a tough time adjusting from club to college (depending on the freshman) so the adjustment(s)/experience maybe a good indicator about SU’s immediate future.

bottom line: It is likely that Stanford will improve dramatically (top 2, or #1) but it will probably be in spring of 2016. I… Read more »

Sorry but I have never talked about debacle for Lia Neal. My words have been a disappointing long course season. Yes, it was disappointing to not see her at least in the US relay team in Barcelona. She hasn’t improved her best times in long course so I hope she will rebound next year to qualify for Kazan 2015.

A top three finish in 2014 is overly ambitious for this team. Not only did Stanford finish eighth in 2014, they’re also eighth in returning points. Georgia, Cal, and Tennessee have far more points returning and each had better 2013 recruiting classes. Eighth is a floor for Stanford, but the ceiling is probably fifth. Recruiting’s a little out of synch-adding Hu and Engel to the DiRado, Lee, Neal core would make the Cardinal an instant contender, but losing DiRado and Lee will hurt. Pretty much certain Greg’s 2014 recruiting class will be the best in the nation by a large margin, but he still needs another super class before they’re back in the hunt for an NCAA title. 2016 sounds… Read more »