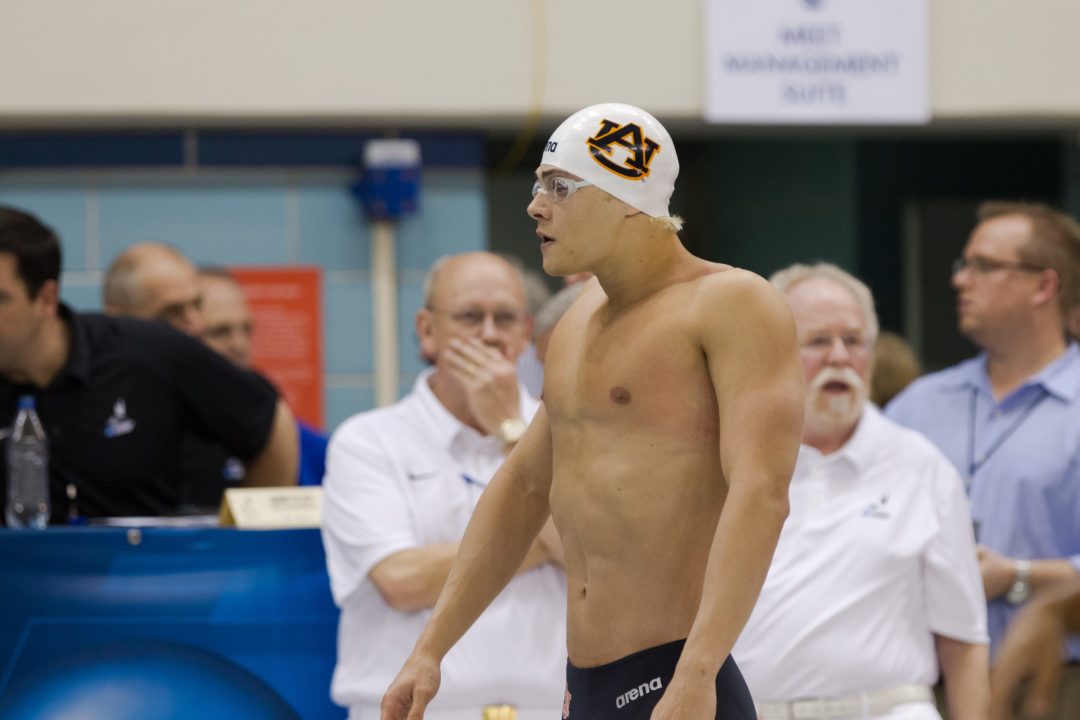 Marcelo Chierighini is the fastest man left in the NCAA. How far can he lead the Tigers?

The Auburn Tigers stumbled in the 2012-2013 season. The men, despite winning 4 out of 5 relays at SEC’s, saw their 16-year conference championship streak ended by the Florida Gators, and then at NCAA’s, the Auburn men finished just 8th: their lowest outcome since the 1991-1992 season (though that year, they were only 15th – not nearly as good as they were in 2013).

But there is a hope around the Plains. That hope stems from senior Marcelo Chierighini, who despite having enough success to go pro has returned for his senior season. He’s the best sprinter Auburn has seen since his countrymate Cesar Cielo, and–much like we saw Vlad Morozov do for USC last year–he could lift the Tigers to a top-5 finish.

With Morozov going pro, we’re going to miss out on what could have been the most spectacular NCAA sprint battle in decades. As things are, though, Chierighini could be just as spectacular in 2014 as Morozov was in 2013.

Chierighini is the best returning swimmer in the 50 yard freestyle with his 18.99 from the NCAA finals, and he was an 18.85 at SEC’s (he and Morozov combined for all 9 times under 19 seconds last season, and Chierighini actually had 5 of them). He also placed 2nd at NCAA’s in the 100 yard free with a 41.51: eight-tenths behind Morozov’s victory and NCAA Record.

After a very good summer, Chiergihini wound up 10th at the World Championships in the 50 free and 6th in the 100 free (notably, he pushed through the semi-finals with a 3rd-seeded 48.11).

2014 will be a good year for Chierighini. He only has the Pan Pacs meet to focus on in the summer, which while important is not nearly at the level for Brazilians as Worlds or the Olympics. That means that he can load up for one last “hurrah” headed into his professional training. Thing about his motivation, too. Not only will he be hungry for individual (and a long shot at team) NCAA Championships, but he has a massive opportunity going into his professional career. Morozov, you will recall, did not break Cesar Cielo’s record in the 50 yard free (though on a ‘perfect swim’ he probably would have).

If Chierighini were to break the NCAA/U.S. Open Record in the 50 yard free (18.47), held by fellow Auburn Tiger and Brazilian Cesar Cielo, his marketability in Brazil will skyrocket. Even if he were able to get Cielo’s Auburn Record in the 100 yard free (40.92). He knows it, and Hawke knows it, so expect Chierighini to qualify for NCAA’s early, and then put everything into those swims.

But he is only one swimmer. Now that we’ve written about 400 words about Chierghini’s potential (and he was worth all of them), attention needs to be turned to the rest of the team, and why this team only was 8th despite some obvious successes. The gap to 7th was just shy of 60 points, so that’s the target for the Tigers.

That was an extremely young group though. Grothe was a junior, Hancock and McKee were sophomores, and Mendes was just a 1-semester freshman. So they will be better prepared to hit things at this year’s meet.

Brett Hawke’s next Brazilian project is Arthur Mendes, who joined the Tigers’ squad at the semester last year. On such a quick turnaround, he just missed finaling at NCAA’s in the 100 yard fly, but placed last (39th) in the 200 fly.

Mendes’ long course bests includes a 52.70 in the LCM 100 fly, which converts to 46-low in the 100 yard fly. That lines up with him being able to improve even his strong 46.6 season best in the 100 yard fly, and should make him an individual scorer at NCAA’s (he also split 46.0 on Auburn’s medley relay).

The Other Auburn Freestyler:

At any rate, Auburn probably has the best 1-2 sprint combination in the country (with Cal, now getting Tyler Messerschmidt back, having the best 1-2-3). They rode that last year to an NCAA title in the 200 free relay and a 3rd-place finish in the 400 free relay.

Also on that winning 200 free relay was TJ Leon, who is on the verge of becoming a star in his own right as a senior. He was sub-20 in high school (one of the first guys to do that, though easily forgotten), and has been 19.6 at Auburn. He split 19.06 on Auburn’s 200 free relay. That made him the only of the four Tiger swimmers who didn’t split under 19 seconds on that relay, but hey: when your worst leg is a 19.0…well, there’s a reason that they won this relay by over half-a-second.

He’s really a pure sprinter, but Auburn doesn’t need him to be anything more next year.

That means their only lost piece from NCAA’s and those free relays is Kyle Owens. He was also their backstroker, but kicked the meet off with an unbelievable 18.5 split on that 200 free relay, which will be hard to replace; he also swam some good backstroke legs on the medleys; he struggled in his 200 backstroke, but he won’t be easily replaced for this team as a performer or a leader, either.

The Mega-Replacement, and Future Star:

Auburn might have signed the best recruit outside of the two nutso superstars Jack Conger and Ryan Murphy, though he seems to have been a bit lost in the wash.

Kyle Darmody has been 19.8 in the 50 free, 43.8 in the 100 free, 1:36.8 in the 200 free, 47.6 in the 100 back, and 1:46.3 in the 200 back. He’s not yet Kyle Owens, but he could be very, very close by the time his freshman NCAA Championship meet rolls around. He comes from that great SwimMAC program, which should make for a very smooth transition at Auburn, where the entire coaching staff coached with, swam for or around, or did both with SwimMAC head coach David Marsh at some point in their careers.

With him on board, Auburn should find themselves in a dogfight with Cal for the 200 free relay national title again. He could very well take over the backstroke leg on Auburn’s medley relays as well: his best is already faster than Auburn’s top returning backstroker, which happens to be Disney-May’s 48.5.

Darmody will have a great training partner to push him every step of the way in the backstrokes with the arrival of fellow freshman Joe Patching.  The Plymouth, England native was arguably the fastest junior backstroker in Europe last year, turning in long course times of 25.8, 55.2, and 1:59.0.  Murphy and Conger are in a league of their own, but Patching (and Darmody) are two of the best in a loaded backstroke class.

The one really significant spot that Auburn didn’t fill through recruiting is the breaststroke leg. The Tigers graduated their #1 and #2 relay options, Stuart Ferguson and Chandler Gertach. They do return senior Peter Haas next year. He’s better in the 200 (was a 1:56 last year), but he also showed great improvement in speed as a junior.

He was a 54.44 in the 100 yard race as a junior, which means as a senior, if his improvement continues, he could be a solid plug for Auburn’s medleys, with strong indications that a certain very good high school senior breaststroker intends to commit to Auburn.

Rest of the Fresh:

Overall, the Tigers are bringing in nine freshman.  We covered Darmody and Patching, but the Tigers got two other much-needed pieces in this class, headlined by Michael Duderstadt from Panama City, Florida.  Duderstadt brings some much-needed youth to an ailing breaststroke group (54.5 and 1:57.9), along with some solid sprint speed for Hawke to work his magic with (20.6 and 45.2).

The final instant contributor is Alex Press, an Australian international with a lot of potential.  At the Australian Youth Olympic Festival earlier this year, Press showed what he’s capable of, posting a 22.7 and 51.3 in the 50 and 100 free, along with a 54.3 100 fly.

Auburn should get a little bit of help on the boards from rising senior Johnny Santeiu, who was three-event scorer at last year’s NCAA’s.  Santeiu is also the reigning 3m Zone ‘B’ champion, and SEC champion on platform.  Moving up to the podium at NCAA’s will be an uphill battle, however; only two divers who finished in front of Santeiu over the course of the entire competition were seniors last year (Harrison Jones on all three boards, and Logan Shinholser on platform).

While Auburn shouldn’t see much of a drop-off in their relays (particularly the freestyle ones), it looks like their ceiling from a team finish perspective is 8th place, right where they finished a year ago.  The Tigers were a full 60 points behind 7th (Stanford, who DQ’ed two relays), and while Florida, Texas, and USC are also within striking distance from a points perspective, those teams should all be as good–if not better–than 2012-2013 (yes, USC, even though they lost Morozov).  With Indiana (9th place) returning virtually their entire squad, Auburn will be in a hard-fought battle to hang onto the 8th place spot.

Top 5 finish for sure! The guys are ANIMALS

Chierighini is already a great sprinter, and entering his 4th year with Hawke I see him dropping time, but cutting .4 off of his 50 would be a huge accomplishment.

USC has a great freshmen class, Texas and Cal have huge talent in their stud recruits, and Michigan is gonna be there with the way they’ve been able to develop people over the years. Very deep talent in the NCAA, several teams with a great chance to take home the title.

I am with you.
I believe Chieriguini can threat 100free time, but i have my doubts about 50time.Chieriguini didnt swim his full potential in 100free at that time because of brazilian trials.I was expecting around 41.1.I will be surprised if Chieriguini blasts a 18.4 in 50 free.He needs to improve his start.Is not in Cielo(old form, before surgery) league.

That’s 7/8 swimmers in the WORLD who have been through the NCAA, and 3 from Auburn. But you only really see that in the sprint frees. Even though the US dominates most internationally in the stroke events, for some reason it is the elite sprinters who flock to the USA – particularly programs Auburn and Arizona. I wonder why that is?

Well auburn has to allure of a non American head coach at the moment who just happens to be a former Olympian, and since Freddy in 2003ish they’ve always churned out great 50/100 freers. As a pure sprinter I’d imagine auburn is just as good a option as Cal or USC, plus not everyone wants to live in cali

Ragnar – to clarify, Brett Hawke is an American.