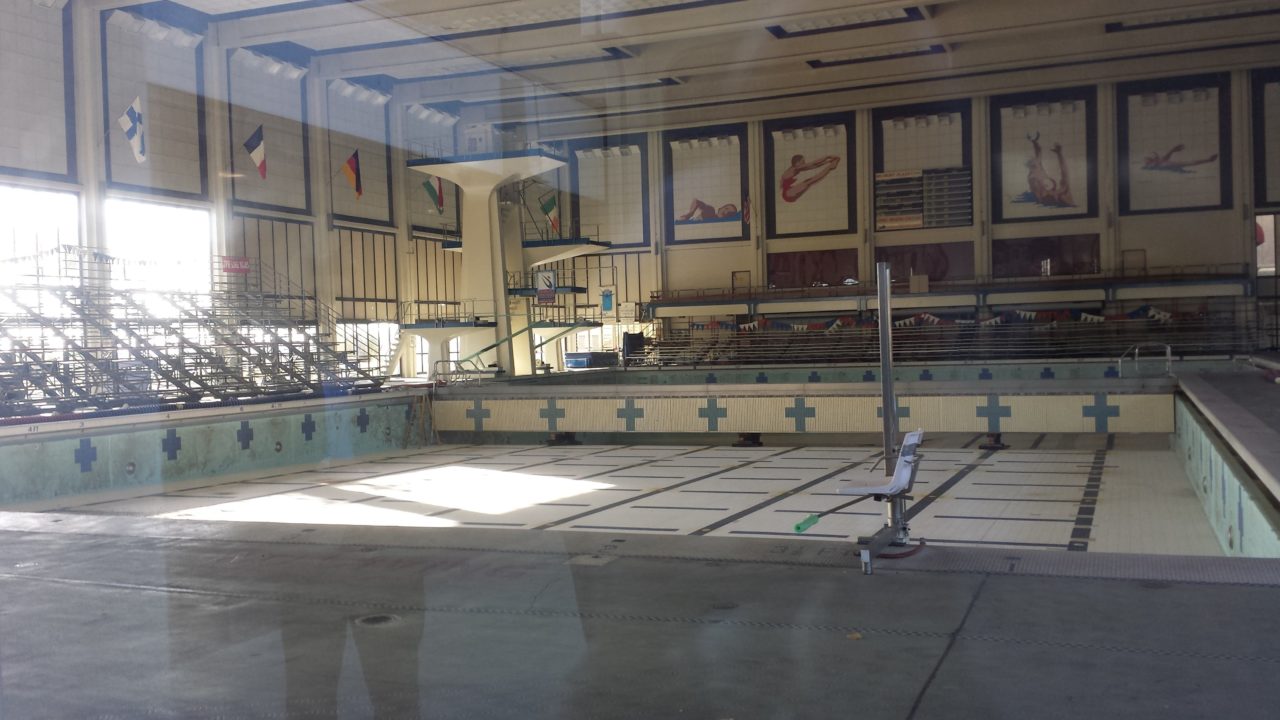 In the shadow of the megalithic giant of history, the Belmont Plaza Olympic Pool in Long Beach, California, there is... Current photo via Lucy Johnson

In the shadow of the megalithic giant of history, the Belmont Plaza Olympic Pool in Long Beach, California, there is once again swimming by the sea.

Lucy Johnson, who has been one of the community organizers and spearheads for the redevelopment of the Belmont Plaza aquatics complex, shared the below pictures from the Grand Opening weekend that began on December 19th of the new temporary pool that will hold down the fort while the city spends the next two years, and $62 million, building a new indoor facility.

Above is the Belmont Plaza pool as it currently sits, awaiting final demolition.

See the Rebuild Belmont Plaza Olympic Pool Facebook page here to keep abreast of all of the latest news.

Nice writing Tex – “Megalithic giant of history”. Love that! 2011 was the last CIF meet held at Belmont. Doesn’t seems quite the same now over in Riverside.

One of my favorite venues / destinations for swim meets in the USA. College teams (including UNLV), clubs, and high school teams all used this venue for important meets every year (not to mention the diving and water polo competitions). I loved heading out to coach at the Grand Prix meet that USA-Swimming (and FAST-CA) put on there in the past. Leaving Iowa in January with single digit temps. and landing in SOCAL with 70F plus. was an added plus. Good luck to those in Long Beach and everyone involved moving forward! I can’t wait to see the new pool and coach / witness some fast swimming out there again soon.

Couldn’t agree more. Belmont is the best pool in the sport.

I’m looking right now at an old photo album, where there are adjacent photos of me(swimming in 2009)and my father(at 1969 water polo NCAAs) striking the same pose in the same spot, both in speedos, at Belmont.

Every time I see an indoor pool in a movie or show, I look for the tell-tale diving tower and signs of aging that identify Belmont, and am rarely disappointed. Van Wilder, Da Vinci Code, House, just off the top of my head.

Swimming relays with your whole team stacked 5 feet behind you chanting your name like its Thunderdome….is a different feeling.

Man I’m getting all sentimental.