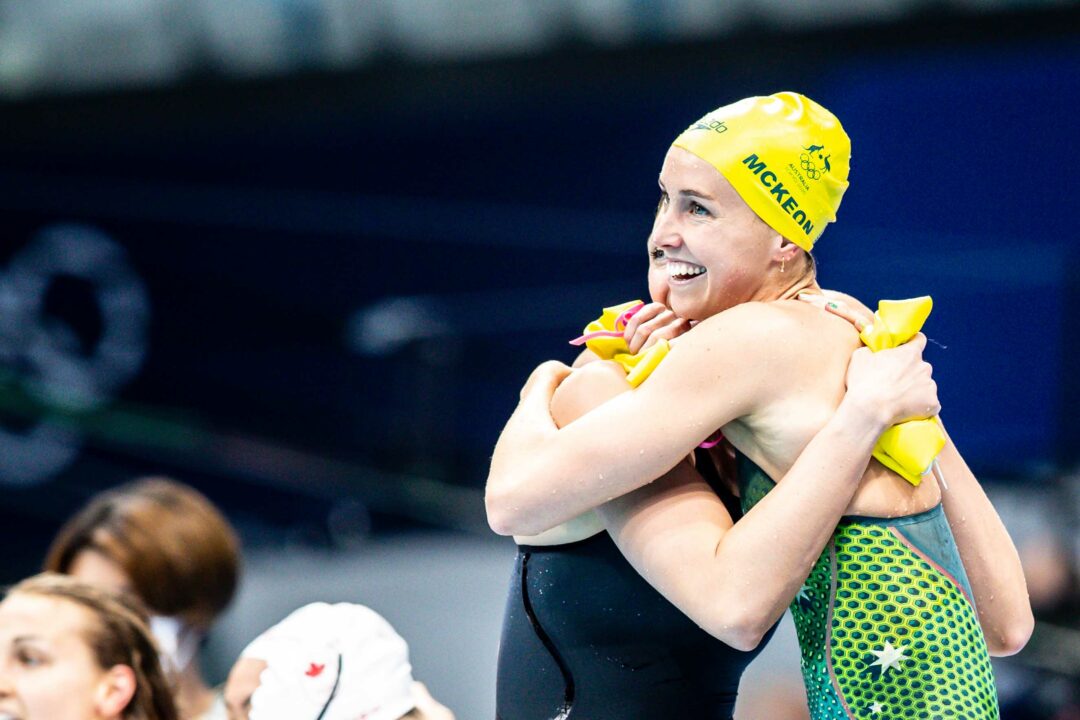 In the second last race on night 1 of the 2022 World Short Course Swimming Championships, the Australian women reset the world record in the 4×100 freestyle to win gold. Team Australia swam a 3:25.43 to bring the world record under 3:26 for the first time to improve upon the Netherlands’ mark of 3:26.53 from 2014. The Dutch women set that former world record at the 2014 World Championships.

The American women were notably also under the former record with their silver medal time of 3:26.29 and they were actually ahead of Australia for the first 75% of the race.

The race started with a showdown between Mollie O’Callaghan and Torri Huske, which Huske won with an opening split of 51.73 to O’Callaghan’s 52.19. Kate Douglass continued the USA’s lead with a 51.17 split while Madi Wilson was slightly slower with her 51.28. On the third leg, Australia’s 52.00 was a touch slower than Claire Curzan‘s 51.59 and the USA seemed to be moments away from a gold medal and a new world record.

But Emma McKeon of Australia had different plans and she managed to out-swim the USA’s anchor Erika Brown with a mind-blowing split of 49.96. That sub-50 split by McKeon is, according to the event announcers, the fastest split on a women’s 4×100 freestyle relay in history. Brown closed with a 51.80 to bring the USA to a 3:26.29 for silver, followed by the Canadian contingent, which swam a 3:28.06 for bronze.

Despite Australia’s legendary status in the sprint events, they didn’t actually hold any short course world records in the relays heading into this meet. The Netherlands held the 4×50, 4×100, and 4×200 freestyles, while the Americans hold the 4×100 medley and the Americans and Swedes share the 4×50 medley.

Australia does, however, now own both the short course and long course women’s 4×100 freestyle world records. Bronte Campbell, Meg Harris, Emma McKeown, and Cate Campbell swam a 3:29.69 for Olympic gold in 2021, resetting the world record.

Wilson is totally underrated – she always shows up and is a total workhorse. She doesn’t get the attention and praise she deserves.

based off some BOTE calculations I did, McKeon’s split roughly converts to a 45.17

US women under old WR too. Not too shabby.

I hope we can see 51 splitting C1 again before she retires.

McKeon’s rally removed scrutiny from the others and especially Mollie, who appeared to have no intensity whatsoever. That opening leg reminded me of Titmus leading off the 4 x 200 in Tokyo, going through the motions while assuming an easy win. It will be interesting to see what Australia does with Mollie going forward. Her style does not lend well to 4 x 100 relays. You can’t use her at anchor because if she’s behind on entry she’ll fall further behind and leave too much to do. She needs somebody to chase. At lead she’s not chasing. The urgency gap between herself and Huske was blatantly obvious. However, I think Mollie will steadily find more early speed. Her backstroke will… Read more »

Titmus was. by her own admission, mentally and physically exhausted by the time she swam in the 4*200 in Tokyo. She had already won both the individual 200 & 400s and been through all of the media focus involved in the rivalry with Ledecky. BTW she swam 1.54.5 in the Tokyo relay (1st leg) – a good time but slower than she swam at the Olympic trials and in the individual 200 final. As for Mollie, last night she had qualified first for the 100 back final in a PB just 20 minutes earlier than the relay, so she was probably tired. She has swum 52.4 in the long course 100 so 52.1 in this relay was much slower than… Read more »

Some validity with what you are saying re MOC in that she is still very much a “work in progress” and still some way short of the “relay monster” status of C1/McKeon/Chalmers.

I can agree with your comment that some thought will be required regarding where to place her …. and this rings true for both FS relays however I’m not sure I’d go “all the way: with your blanket statement regarding 4X100. Whilst I DO think she will need to broaden her racing MO going forward; I think it’s also the case that her FS seems better suited to LCM where she can “sustain her attack” than to SCM.

Can certainly agree that the backstroke form she showed… Read more »