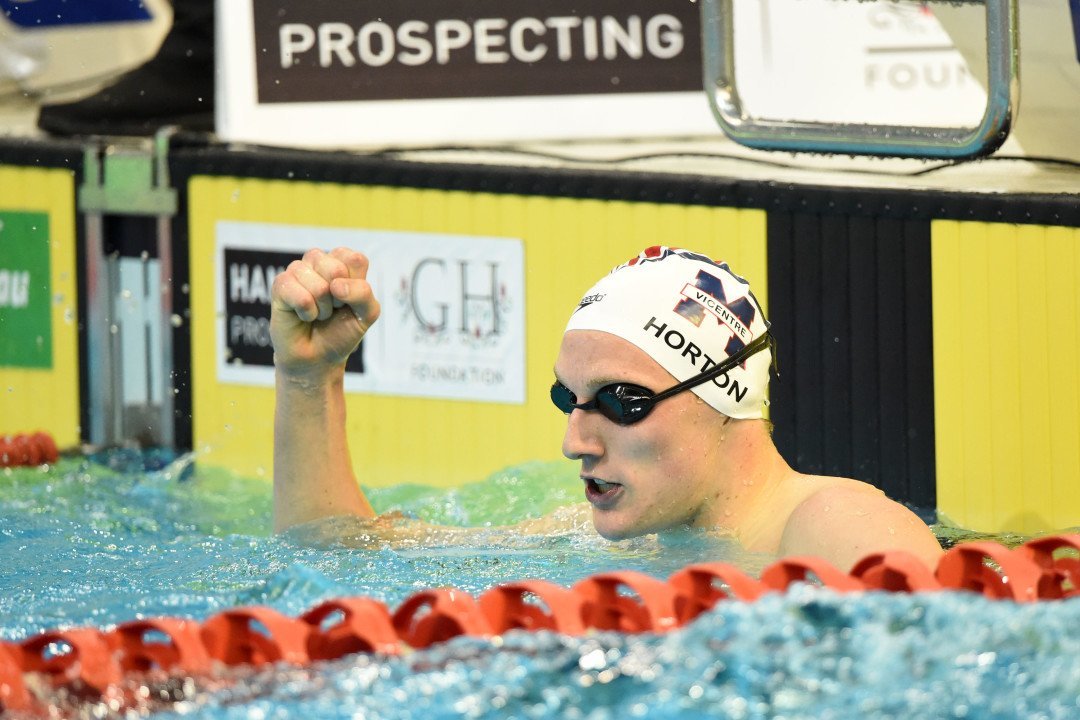 Mack Horton and Sun Yang are two intense rivals both in the pool and on the deck. Archive photo via Courtesy of Swimming Australia

Australian distance ace Mack Horton took the rivalry with Chinese World Champion Sun Yang up yet another notch tonight in Rio.  The 20-year-old Melbourne Vicentre swimmer kept pace with Sun the entire stretch of the men’s 400m freestyle final tonight, only to find another gear just in time to out-touch the defending Olympic gold medalist at the end by just .17 of a second.

The final time for Horton was 3:41.51 for gold, while Sun touched in 3:41.68 to nab silver, but the heated battle between the two took place after the race as well.

What transpired right after the touch was silent, but unmistakable, as Horton cast an icy glare in Sun’s direction. The Chinese swimmer was also visibly emotionally charged and slightly bewildered by what just transpired in the final stroke of the race.

Such is the case of the relationship between the two monster swimmers, partially rooted in the fact that Sun tested positive for a banned substance back in 2014 and quietly served a subsequent 3-month suspension. In the grand scheme of the worldwide doping situation, Sun’s situation, as well as his shocking no-show in the men’s 1500m freestyle final at last year’s World Championships easily placed him into the role of certified swimming villain.

But, the Chinese swimmer didn’t exactly do anything to quell the villain analogy, as he was reportedly trying to taunt Horton in the warm-up pool before the swim events kicked off. Of the incident, Horton candidly told the media, “He just kind of splashed me but I ignored him because I don’t have time or respect for drug cheats. He wasn’t too happy about that so he kept splashing me. I just got in and did my thing,”

While watching the medal ceremony for tonight’s men’s 400m freestyle event, there was clearly some awkwardness between Horton and Sun as they cautiously shook hands and politely congratulated each other on the podium. Clearly, the tension is rising and may come to a head as the two battle again in the men’s 1500m freestyle later in the meet.

“Definitely a win for the good guys,” Horton told Australia’s Channel Seven. “Don’t know if it was a rivalry between me and him, just me and an athlete who has tested positive I guess.”

For now, Horton can relish the fact that he won Australia’s first medal in the men’s 400m freestyle event since Ian Thorpe took home the gold in 2004. He also represents a potential momentum kickstart for Australia as a whole, as the entire team is on a collective new track to overcome the disappointment from their London 2012 performance.

Oceania Records as of Rio Day 1:

Horton is a punk

He called out Sun as a doper & then owned him in the pool.

Trash talk is not needed in Olympics

Vote Up14-3Vote Down Reply
He Gets It Done Again

Judy is a punk. Horton is an Olympic champion.

I totally see the sportsmanship, be classy attitude that many like to see. But I also like that he calls it what it is. A lot of people are too PC to say it, and Mack didn’t shy away.

Like it or not, trash talk and cockiness make sports and swimming more watchable. Mack brings a personality, not just another scripted athlete. Fans who normally wouldn’t watch tune in because they hear about a controversy.

but in fact, Sun is not a drug cheater. The check was positive is because of the bills for his heart problem. Can’t you read the true and fair news?

Remember how bitter Phelps was when he was beaten by Bedermann because Biedermann had more superior suit, prompting Bowman to make threat against FINA that Phelps would never swim again if the rubbersuit not banned?
He didn’t let swimming do the talking, he spoke up.

If he was beaten it would have sounded bitter – he is just saying what he thinks. He carefully didn’t make it personal, just ethical. Fair enough I reckon. He could’ve chosen to mention the Kazan virus disbelievers but instead just let his swimming do the talking.

To be fair to Mack the (tactless) interviewer asked Mack whether it was a “win for the good guys”… and I think Mack said it wasn’t a rivalry between him and Sun but “a rivalry between (me) and athletes who test positive” rather than “an athlete who has tested positive”. I think he was trying to deflect the question rather than heat things up… BUT my memory of it could be wrong 🙂