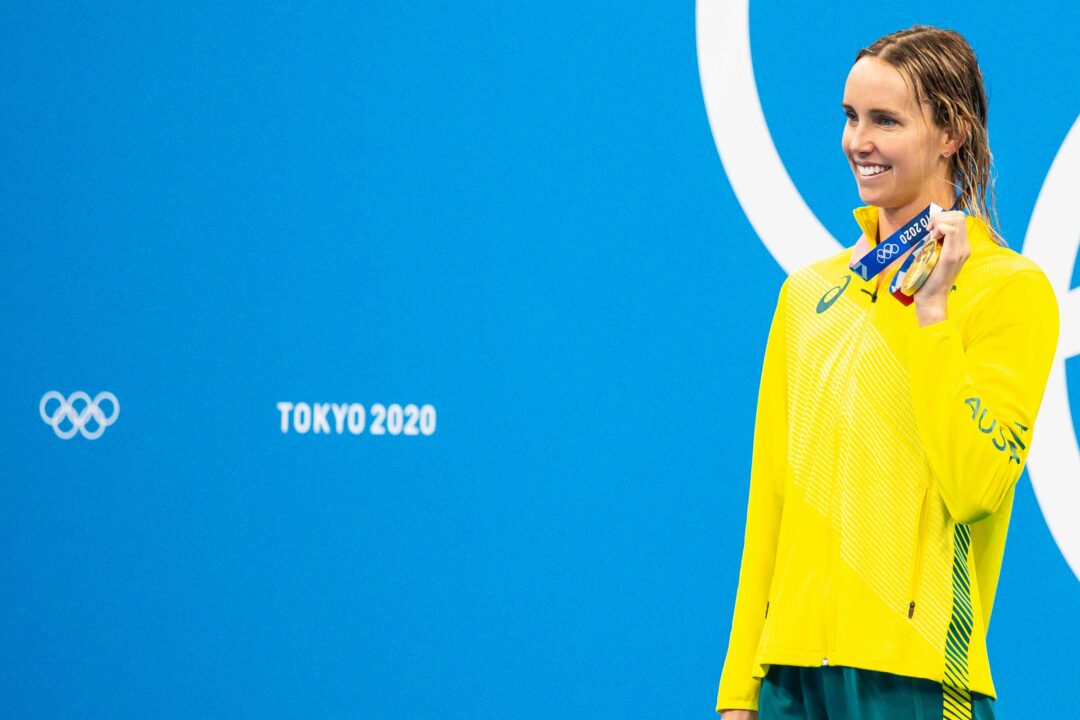 Australian Olympian Emma McKeon revealed today that she will not be pursuing a spot on the nation's roster for the 2022 FINA World Aquatic Championships. Archive photo via Jack Spitser/Spitser Photography

Australia’s most decorated Olympian Emma McKeon revealed today that she will not be pursuing a spot on the nation’s roster for the 2022 FINA World Aquatic Championships.

Although the versatile 27-year-old is slated to race at the Trials meet taking place in May, she is reportedly only potentially seeking a bid for the Commonwealth Games in Birmingham as opposed to Budpaest, but even that is not definite.

“Emma’s a definite no for worlds,” Bohl told Courier Mail.  “We made a decision we’re going to back-end the year.”

“With someone like Emma, you’ve got to look at 2024 and work back from there,” Bohl said. “Looking short-term is not the sensible option for someone like her.

“As the years get closer to 2024 they get more important.”

When the 2022 Worlds were originally slated for Fukuoka this May, Swimming Australia announced that several upper-echelon athletes would be able to bypass the elite competition in favor of the Commonwealth Games.

Since Worlds has not been inserted by FINA onto the 2022 calendar for June/July due to Fukuoka’s postponement to 2023, McKeon is the first Aussie to make her racing intentions known.

Good choice.
If she wants to perform at her best in 2024 she needs a break. Physical and mental. MP would have never had such a long and successful career without breaks.

There probably won’t be a world champs if war erupts in Eastern Europe .. I wonder if the Russians would still be invited to participate once they invade Ukraine ., or is that part of EU sanctions ?

It definitely makes the womens 4×100 free relay team for Australia very interesting now … O’Callaghan, Wilson, Jack, Harris perhaps ? Might give Titmus and McKeown a chance as well maybe if they go

Yeah missing 3/4 of the Olympic winning relay is not ideal. Assuming Harris is healthy then she should be in, plus O’Callaghan and Jack and Wilson. Unless someone comes out of nowhere I can’t see anyone else being on there. Throssell had a faster 100 than Kaylee and Ariarne last year so maybe her?

With McKeon and the Campbells definitely not going to Worlds, this opens up more slots for other up and comers to get individual freestyle berths and I’m excited to see what they can do! Thinking O’Callaghan, Wilson, Harris etc

I agree. Our medals may take a slight hit but I think it’s worth it, there are 3 world champs and an Olympics and Comm Games in the next 3 years. Better to give some experience out and really prioritise the important ones.

Maybe she is getting married or something big this year like raising puppies . Priorities!

Last year she did a hell of a lot of racing, Olympics, World Cup ISL etc, She is 27yrs old not 17, Other athletes did not do half the swims Emma did last year, She is not a machine.

Absolutely. And you could tell that she wasn’t swimming her best by the end of ISL. she deserves a break!

So I guess given how late she got back into training she’s gonna train through trials and taper for Comm Games? Probably she’ll only compete in the meets that are in their usual place in the calendar so Comm Games this year, Fukuoka next year and then only Olympics in 2024 (no Doha).

But if she wants to be on the comm games team she has to go to trials I think. And comm games is only 5 weeks after Worlds.

Yep, but I’m suggesting she might not have much rest for trials given she only needs to be top 3 for Comm Games and there’s no Campbells.