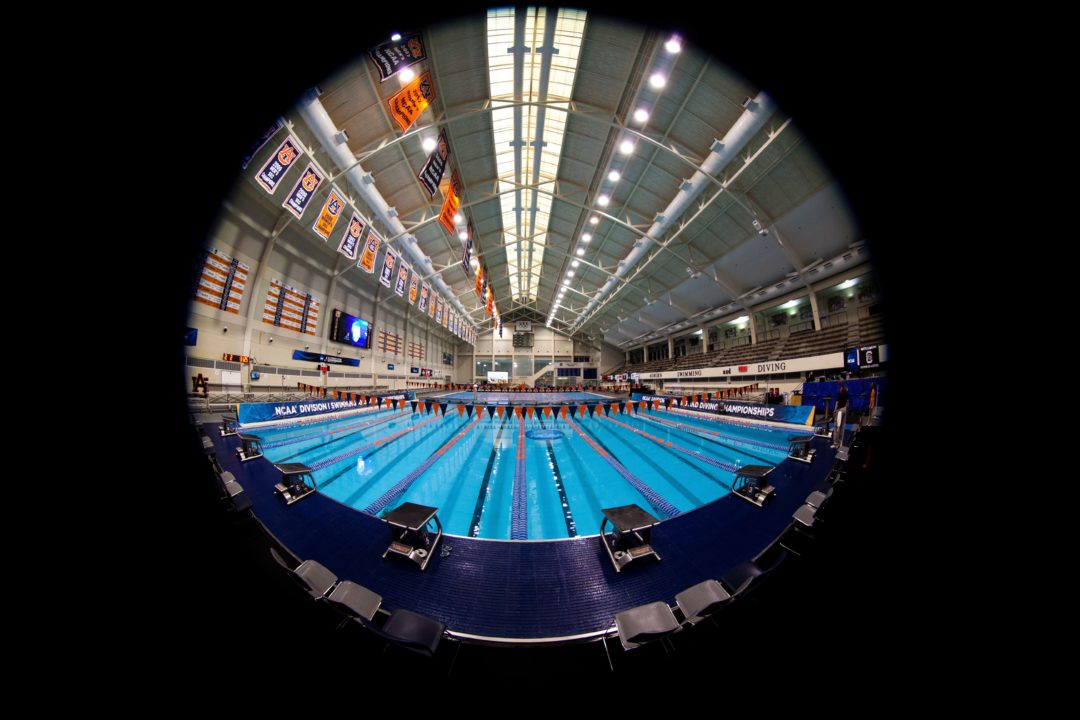 It was a fairly safe prelims on day 2, with all of the contenders (with rare exception) making it safely through to finals.

There are a lot of great races, and a lot of important doubles, on day 2 of this meet. It looks like from early returns that Georgia is having a much better day than they did on Thursday, but that might change in finals. Remember that in the evening, the 800 free relay will end this session, but that race isn’t swum in prelims.

Overall, the biggest names were all safely through, though here and there (especially in the 100 breaststroke), there were some shocking misses.

Cal appears to have lined themselves up to break another NCAA Record this evening. They swam a 1:35.16 to lead the prelims scoring with a quartet of Cindy Tran, Caitlin Leverenz, Colleen Fotsch, and Liv Jensen, which just missed the mark the same quartet set last year in 1:35.03.

Trans split an unbelievable 23.55 to give the Golden Bears the early lead – that might be the fastest split we’ve ever seen on backstroke (I’ll research that between now and finals). Every other swim, however, has room for improvement. Leverenz can cut off three tenths, as can Fotsch. Jensen could cut off as much as half-a-second, and the Bears could break this record by a full-second if they’re clicking.

Behind them are the Texas A&M women in 1:35.71, including a 26.40 split from Breeja Larson. That’s a solid prelims time, but keep in mind that USC’s Kasey Carlson split a 26.24 at last year’s meet. A&M is the only of the top 7 relays in this race that feels like they were close to maxed out, so they’ll have to really push in finals to repeat their 2nd-place.

USC was 6th here in 1:36.97 (using Hosszu on the fly leg), but should be able to got close to a second off of that time in finals, so watch out for them.

Tennessee earned the 3rd seed, with the big surprise being Molly Hannis’ 26.72 breaststroke. She’s been a total boondoggle for them in her freshman season. That’s another relay that will be faster in finals.

Florida and Virginia both failed to final at all. Though disappointing, neither is a huge surprise – especially Florida, where this is their weakest relay. The only sting for them is that they used their best sprinter, Sarah Bateman, on the relay and burned an event for her.

There were no accidents in the prelims of the 400 IM as there were in the 200, and Florida’s Elizabeth Beisel made it safely through with a no-doubt swim of 4:01.57 for the top seed. Indiana’s Allysa Vavra, who has the least easy-speed out of the top 5, also ensured herself a spot in the final with a very strong 4:02.81 for 2nd.

This is sort of how this race went last year, as well. Vavra and Beisel went pretty hard, while Cal’s Caitlin Leverenz and USC’s Katinka Hosszu were just safely through. Leverenz this year though took the 3rd seed in 4:04.04, versus Hosszu’s 4:04.63 – Hosszu is a master of slow-playing these finals, but that’s much slower than she was even last year. Her swim, however, had a clear focus of building each 100.

This final actually looks almost identical to last year’s. Tack on Jana Mangimelli of Georgia, the 7th qualifier, and if you squint your eyes to where Texas A&M sophomore Cammile Adams looks like Texas A&M redshirted sophomore Sarah Henry, and you’ve got the same 8 representations in the A-Final. Adams especially has to be pleased with her 4:06.06, after she had a terrible swim in Thursday’s 500 free.

Georgia might finally make some ground up in this race, thanks to Melanie Margalis and Amber McDermott qualifying 10th and 11th in the B-Final. Cal also had a B-Finalist in Shelley Harper, but unless Leverenz pulls off the win, the advantage overall should go to the Bulldogs in scoring.

The most surprising miss was USC’s Haley Anderson, who was 23rd in 4:12.06. She won the 500 free on Thursday, but added almost three seconds in this 400 IM. None-the-less, this will allow her to save some energy for the mile on Saturday.

The Auburn women were a bit down on their scoring on the first day of the meet, but they look like they’re trying to make that back up in a hurry by taking the top two seeds coming out of prelims. Olivia Scott reclaimed the school record (taken from her earlier at SEC’s) with a 51.46, and Anna Vanderpool-Wallace, on what looked like a much better start than she had in the 50 on Thursday, took 2nd-place honors in 51.57. Tennessee’s Jenny Connolly, on swim 2 of the session, cruised safely to a 51.84.She looked sharp after a slow opening 25 yards.

Yale’s Alex Forrester took her position in 4th. That’s where a progression would seem to put her after missing NCAA’s last season but swimming very well in her freshman year to win the B-Final. Kelsey Floyd gave Tennessee two in the top 8 with her 5th-place finish.

Virginia Tech and Arizona State put a couple of new faces into the A-Final as well in Heather Savage and Caroline Kuczynski. Savage didn’t even qualify for NCAA’s last year for the Hokies.

Cal has two scorers with Sara Isakovic in the A, and Cindy Tran in the B (in a three-way tie for 12th). It looks like Cal is confident enough, at least for prelims, to let Tran try the fly/back double – last season as a freshman she scratched this 100 fly. Georgia is scorer-less in this race for the 2nd-straight season.

A couple of touch misses in this race included Lauren Smart of Arizona, Amber Boucher of Boise St., and Mackenzie Powers of Penn State. Smart and Boucher both had a good shot at the A-Final, but ended up without an evening swim.

Arizona’s Alyssa Anderson tripped up a bit in prelims of the 500, and as has been a theme of this 2nd prelims session, she left no doubt with a 1:42.91 for the top seed. That’s a fabulous swim for her, destroys her lifetime best, and also breaks Lacey Nymeyer’s 2008 School Record of 1:43.33.

This is a highlight event every year for Georgia, and with two of the top three seeds it should be again (Shannon Vreeland 1:43.28) and Megan Romano (1:43.41). They got their first big break of the day when Cal’s Sara Isakovic dropped down to the B-Final (though her teammate Caroline Piehl also made the B, and wasn’t slotted to score). Georgia just missed a third A-Finalist when freshman Jordan Mattern hit in a three-way tie for 9th with Shara Stafford and Catherine Breed at 1:44.72.

As for Cal, Liv Jensen made the A-Final in 1;44.06, which was a touch off of where she went at Pac-12’s, but still will be good for important points.

Texas’ Karlee Bispo, who is the highest-returning swimmer in this race, was safely through in 1:43.82.

For the 2nd-straight year, it took under a minute in this 100 breaststroke to make the A-Final, led by a 58.54 from NCAA Record holder Breeja Larson of Texas A&M. She was sub-58 at Big 12’s unrested, so even a time that quick was probably a relaxed swim for her.

It looks like George Mason’s Ashley Danner might finally have her moment in the sun, after two years of being oh-so-close, as she took the 2nd seed in 59.20. Behind her was Arizona State’s Rebecca Ejdervik and Texas’ Laura Sogar in 59.41 and 59.43, respectively. For Sogar, that’s a solid time as compared to Big 12’s.

Columbia’s Catherine meili gave two mid-major swimmers A-final swims this evening, as she was the 5th seed in 59.44. Georgia’s Michelle McKeehan also made the top-8. Rounding out the field for the championship final where a pair of Big Ten stars – National Teamer Ashley Wanland (59.58) and Northwestern’s Jenny Wilson, who was the big “darkhorse” pick in this race. Wilson smashed her own Northwestern Record with a 59.61.

Yes, that means that it took a 59.6 to make the A-Final, with USC’s Kasey Carlson falling into the B with a 59.63. She looked very good on the medley relay, so it’s disappointing to see her in the B-Final (though her 50 free on day 1 was off too). This might have been an issue where she expected 59.6 speed to be good enough, as it always is. She will be pushed in the B-Final by Norte Dame’s Emma Reaney (59.88) who already has a consolation win under her belt from the 200 IM.

Cal won’t have any scorers, though freshman Yvette Kong had a nice swim of 1:00.34 for 19th, after needing an alternate to qualify for the meet. This should give Georgia the chance to pick up more points. Just as the race was seeded, no team will have more than 1 finalist in this event.

A big shock was that Arizona didn’t score any qualifiers, Chelsey Salli is the first alternate (1:00.28) and Ellyn Baumgardner, who was an A-Finalist last year, was 20th in 1:00.47. Also surprising was Tennessee’s Molly Hannis, who was 28th in 1:00.94, despite looking so strong in the relay earlier in the session.

Cal’s Cindy Tran had no problem with the fly/back double, at least early on, as she took the top overall seed in 50.83. She was better at Pac-12’s, but that’s faster than she was leading off Cal’s record-setting 400 medley relay. There are three sophomores in this A-Final, with Ariozna’s Sarah Denninghoff taking the 2nd seed in 51.33 and A&M’s Paige Miller taking 4th in 51.78.

A pair of other swimmers completed successful doubles, with Georgia’s Megan Romano touching 3rd in 51.67 and Tennessee’s Jenny Connolly in 51.92. That means that the top 5 swimmers in this race are on their second individual swim of the night, which shows how non-unique a fast backstroke is in a short course pool.

Romano will have a huge battle with Tran in the final as the 3rd and 1st seeds. That could be a monster 8-point swing. Georgia’s Kristen Shickora put a second swimmer in the A-final for the Bulldogs to give them at least an early edge. Cal, however, have Stephanie Au and Melanie Klaren as the 15th and 16th seeds, so they have every opportunity to move up.

Virginia’s Lauren Smart and Stanford’s Felicia Lee (two more coming off of doubles) both outperformed their 100 flys and will be in the B-Final.