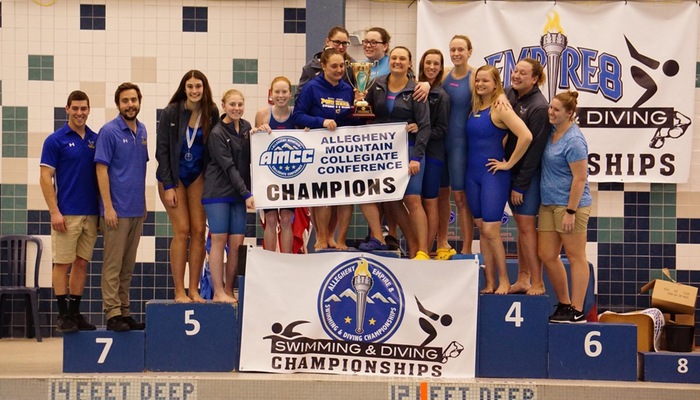 The Alfred State women's swimming and diving team made history as the Pioneers won the first conference title in any sport for the school. Current photo via Alfred State Athletics

The Alfred State women’s swimming and diving team made school history as the Pioneers won the college’s first Allegheny Mountain Collegiate Conference (AMCC) Championship. The results came down to the final event of the four-day competition and the blue & gold edged out Penn State Behrend by five points.

The Pioneers held a 11-point lead heading into the final event of the championship and the 400 free relay team of Veronica Boller (Iroquois), Elizabeth Furmanski (Albion), Kelsey Lynch (Wellsville), and Hannah Snayczuk (Pioneer) finished 7th (4:05.31) in the championship final while the relay team Mikaela Snayczuk (Pioneer), Alina Kisluk (Hamburg), Payton Armstrong (Monroe Woodbury), and Sarah Stevens (Wellsville) finished 14th overall after swimming in the consolation final. The finishes were enough to hold on to the lead to claim the title.

This the 4th year that Alfred State has competed in swimming and diving in the AMCC. The athletic department became full members (in all sports except for Football, Lacrosse, and Track & Field) just this school year.

In the overall standings of the Allegheny Empire Championships, the Pioneers finished 4th with 801 points.