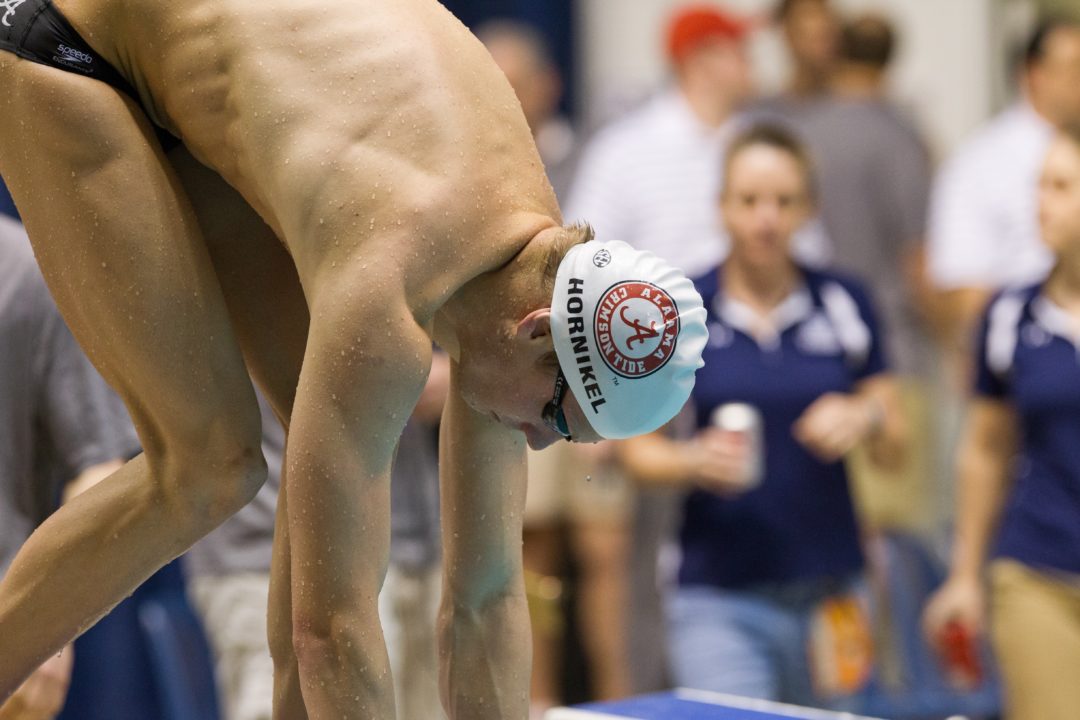 The Alabama Crimson Tide came away victorious in their first competition of the New Year on Saturday, with the men topping SEC rival Kentucky 184-96, and the women bettering Arkansas 149-113 and the Wildcats 152-110.

Senior All-American BJ Hornikel was one of four Alabama men to win two individual events, along with freshman Anton McKee, and sophomores Brian Westlake and Crews Wellford.  The Crimson Tide also got a lift from January arrival Kristian Gkolomeev, who won the 50 freestyle (his first collegiate event) in 20.48.

Hornikel, who was responsible for all 20 points Alabama scored at NCAA’s last season, won both of his signature events decisively, capturing the 200 freestyle in 1:39.86, and later winning the 100 free in 45.40.  Although McKee has shown strong promise as a freshman, Hornikel is still the biggest key to the success of the Crimson Tide.

Westlake, a distance specialist from Penryn, California, posted a 4:32.26 in the 500 and 15:46.71 in the 1650 to win each of the longer freestyle events.  Although he had a multi-second margin of victory in the 1650, Westlake needed all 500 yards to beat Kentucky’s Chris Grimmett-Norris (whose final time was 4:32.74).  The Wildcat freshman held a slight margin over the first 425 yards before Westlake stormed back, outsplitting Grimmett-Norris by 1.3 seconds over the final 50.

McKee claimed victories in both breaststroke events, where he is currently ranked in the top 30 nationally.  Using great back-half speed, the Icelandic native pulled away from teammate Pavel Romanov to touch in 55.42 in the 100 and 2:00.17 in the 200 (Romanov finished in 55.42 and 2:01.96).

The Crimson Tide ended the meet with a dominating 200 free relay, with the foursome of Gkolomeev, Walsh, senior Vlad Caciuc, and Hornikel finishing in 1:19.14, more than five seconds ahead of the field.

In a much more even matchup on the women’s side, the Crimson Tide were victorious behind bookend relay wins, as well as two individual first places from sophomore Emma Saunders.

Alabama breezed through the opening 200 medley relay touching in 1:41.04, nearly four seconds ahead of the Wildcats.  Notably, Arkansas’ A relay was disqualified.

Editor’s note: Alabama entered the wrong names on their A women’s 200 medley relay, so the results aren’t totally accurate.

Alabama took back some momentum with three straight wins.  Saunders cruised through the 200 free in 1:49.35 over Abby Myers (1:50.76), while senior Stephanie Kinsey kept things going with a victory in the 100 backstroke, coming in at 55.76.  Junior Kaylin Burchell finished off the triple in the 100 breaststroke, posting a final time of 1:01.70, just ahead of Arkansas’ Nikki Daniels.

The Crimson Tide bounced back, however, putting together back-to-back wins in the sprint events behind junior Kristel Vourna in the 50 freestyle (23.38), and Saunders in the 100 free (51.26).  Nina Drolc of Arkansas was a close second in both events, with times of 23.59 and 51.40.

Arkansas finally got in on the action with a victory of their own from Anna Mayfield in the 200 backstroke, just ahead of Danielle Galyer of Kentucky, 2:00.89 to 2:01.00.

Up next, Alabama swims its last home against Emory, while Kentucky will battle in-state rival Louisville on the same day.  Arkansas will host Clemson and Rice.  All three of these meets are on January 25.