Yale Women Dominate Tri-Meet at Home Against Dartmouth and Penn 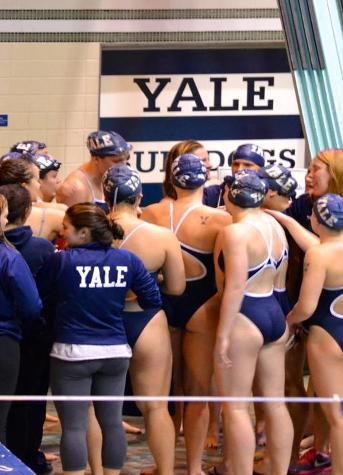 Yale women pulled off a pair of victories on Saturday, beating both Penn and Dartmouth in their home pool. The Elis won nine of sixteen events and were also able to score a lot of points on the depth of their roster. Archive photo via Yale Athletics

There was good swimming all around but Yale women won nine of the sixteen events in Saturday’s double dual meet against Dartmouth and Penn, which was enough to secure them two victories over their Ivy League rivals. Penn outscored Dartmouth in their contest.

Yale freshman diver Lilybet MacRae won both the one- and three-meter diving events, outscoring her opponents by a comfortable margin. The Bulldogs swept the top three spots in the three-meter, with Kelly Sherman and Olivia Loucks finishing second and third. Penn’s top scorer was Cassidy Golden; Dartmouth’s was Katy Feng. In the one-meter, Loucks took second, Penn’s Sivan Mills was third, and Dartmouth’s Kendall MacRae was eighth.

Eva Fabian of Yale took the 1000 free in 9:59.66. She was followed by teammates Isla Hutchinson-Maddox and Casey Lincoln. Fourth went to Penn’s Ellie Grimes. Dartmouth’s Christiana Salvatori was the Big Green’s highest scorer.

Quaker Sheby Fortin led a three-event winning streak for Penn with a victory in the 200 free (1:51.79). Bulldogs Anna Wujciak and Olivia Jameson touched second and third, just ahead of Dartmouth’s Christine Kerr.

In the next event it was Penn’s Church touching first (56.61) to win the 100 back. Second place went to Dartmouth’s Nangle. Penn took the next two spots as well, with Brown and Taylor Sneed. Yale’s highest finisher was Chintanaphol in fifth.

Continuing the Quaker streak was Wickham in the 100 breast. Her 1:05.98 was enough for the win, in front of Yale’s Stephens-Pickeral, Quakers Katherine Ashenfelter and Lia Lombardi, and Dartmouth’s Laedtke.

Hutchinson-Maddox of Yale won the 200 fly in 2:02.90, a mere .10 ahead of teammate Hirschi. Penn’s Madeleine Jardeleza was third, ahead of two more Elis, Allison West and Kasey Mann. Dartmouth’s Maddie Wall took sixth.

Penn was back on top for the 200 back, with Church just squeezing out a victory over Yale’s Chintanaphol 2:02.32 to 2:02.47. Wall of Dartmouth was the Big Green’s highest finisher. The 200 breast featured a tight race between Quaker teammates Lombardi (2:23.92) and Grimes (2:24.13). Yale’s Stephens-Pickeral was a half-second back in third and Dartmouth’s Van Meter took fourth.

Eli distance standout Fabian was back with another easy victory in the 500, winning by more than half a pool length in 4:52.51. Fortin of the Quakers was second, while Salvatori scored for Dartmouth by taking sixth place.

Penn’s Dong was first to the wall in the 100 fly in 56.03. Hirschi of Yale was second. Laura McCulloch of Dartmouth finished fifth.

In the IM, Yale senior Emma Smith cruised to an easy victory in 4:26.79. There was an exciting battle for second between Penn’s Grimes and Chintanaphol of Yale; the former beat the latter by 39 hundredths. Dartmouth’s Wall came in fifth.

The meet ended with an exciting 400 free relay. The Yale foursome of Zhou, Hirschi, Jameson and Wujciak nabbed the gold in 3:27.37. A second behind them Dartmouth (Van Metre, Siobhan Hengemuhle, Amy Sun, and Kamai) and Penn (Dong, Tina Hurley, Katopodis, and Fortin) had a photo finish for second. The two teams had been turning together the entire race, with Penn slightly ahead. At the end it was Kamai who got her hand on the wall first, as Dartmouth won 3:29.35 to 3:29.40.