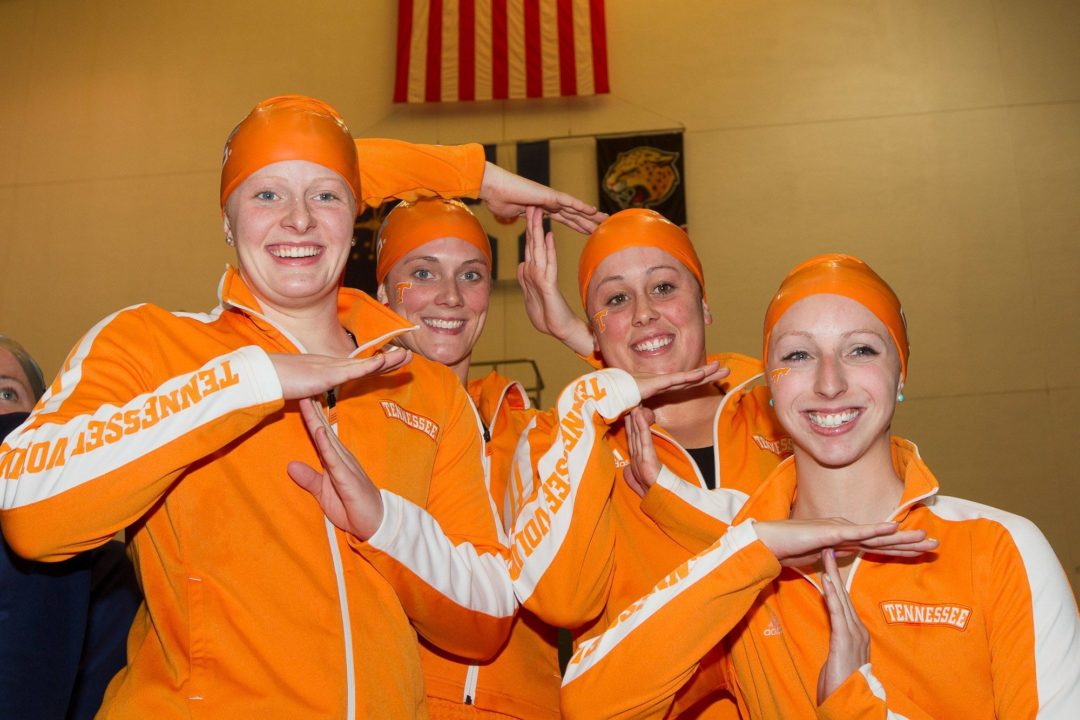 The Vols put on a show against top-ranking opponents Missouri and Virginia Tech in a double dual in Knoxville, TN on Saturday. Archive photo via Tim Binning/TheSwimPictures.com

Senior Lindsay Gendron collected two individual victories in the 200-yard freestyle and the 200 individual medley to lead the way for Tennessee. On the men’s side, sophomore Sean Lehane and freshman Luke Percy scored multi-win days. Lehane swept the 100 and 200 backstroke for the third time this season.

The Tennessee men collected nine wins in the 16 events. The Vols swept both relays and then picked up individual wins from five athletes.  Lehane provided two Tennessee wins in the backstroke. He won the 100 race for the fourth time this season in 48.45. Later in the meet, he won the 200 backstroke in 1:44.84.

The Vols picked up their first win of the day in the first event of the afternoon. The team of Sam Rairden, Renato Prono, Oystein Hetland and Percy won the 200 medley relay in 1:28.67.  Tennessee closed the day with a relay victory as well. Percy, Tillman, Lehane and Rairden won the 400 freestyle relay in 2:59.15, assuring the close win over Missouri.

Tennessee kicked off the meet by winning a relay that came down to the wire. The team of Christina Leander, Molly Hannis, Harper Bruens and Kate McNeilis finished the 200 medley relay in 1:41.15, just 17 hundredths of a second ahead of Missouri’s A team.

Full Results of the meets can be found here.

where are the male distance studs that have gone to Tenn lately? Disappeared or in Hiding?

What’s Lauren Driscoll’s role with the Vols? Looks like she’s pretty far down the pecking order in the back and 200 free.