After the Ampersand: Women’s NCAA Diving 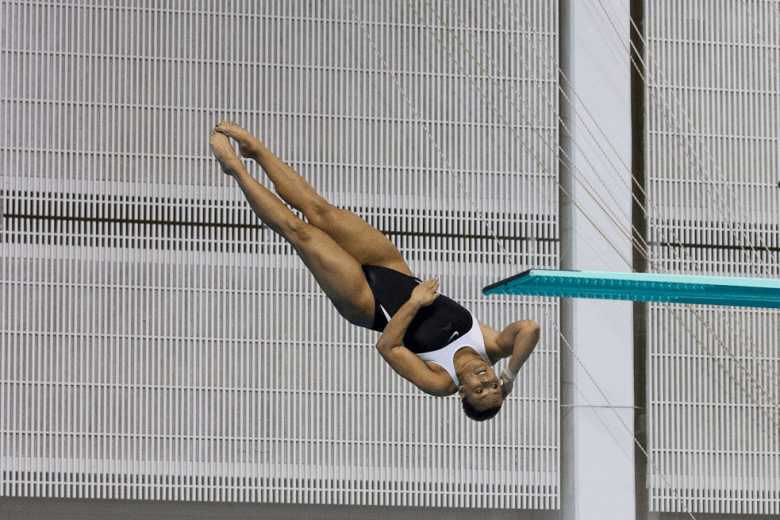 It’s time to stick the last piece of the puzzle into the NCAA Women’s Championship puzzle before making our predictions...

It’s time to stick the last piece of the puzzle into the NCAA Women’s Championship puzzle before making our predictions – diving. Love it or hate it (and everyone’s got an opinion), it’s a part of the team scoring for now. Let’s take a look at which schools have the most to gain from diving, with a special focus on those teams in competition for top-10 team spots.

Nearly every team projected to be in the top 10 should score a few diving points. The big exceptions will be Georgia and Florida, who didn’t qualify any divers. You will recall that in 2010, when Florida won the NCAA Championship, it was on the strength of their divers. This year they weren’t even close. There are a few teams who will stand out though, notably A&M, Auburn, and USC, as they should be able to dig up a lot of ground on the competition.

1. Texas A&M Aggies (3 divers) – The A&M women were the only team that qualified three divers for this year’s championship: Jaele Patrick, Janie Potvin, and LSU transfer Rebecca St. Germain. Since Jay Lerew has come in and taken over this program, they’ve gone from good to lights-out. Patrick and Potvin combined for the top two spots on each of the springboards. St. Germain snuck in by placing 6th in Zone D on the 3-meter. Patrick has struggled with consistency this year after redshirting last season, but Potvin has been a model of such. Top end is probably about 70 points for this trio, with at least 50 seeming like a good possibility.

2. Texas Longhorns (2 divers) – Coming out of the same zone, Texas got two divers in even with a season-ending injury to their top diver Maren Taylor. Shelby Cullinan and Diana Wilcox were the last two qualifiers out of the Zone, but Cullinan got in as the 4th-place finisher on the Platform. She also placed 7th on the 3-meter, which is just a so-so result for her. Regardless, she should score off of both of the higher aparatus. Top end is looking at about 25 points, with at least 15 looking like a very good shot.

3. Minnesota Golden Gophers (2 divers) – Going right back to Zone D, which is recognized as the toughest with 12 slotted invites, Minnesota earned two divers even after losing 3-time NCAA Champion Kelci Bryant. They still have Wenbo Chen, one of the country’s top diving coaches, and he’s actually put two sophomores into the meet – a first for both. Sarah McCrady is a platform specialist in a year when the platform is wide open; Margaret Keefer is a sprinboarder like Bryant was before her. Between the three, they make one impressive, complete three-event diver. With good performances, top end is 35-40, but on limited experience low-end is about 10.

4. Auburn Tigers (2 divers) – 26-point scorer Vennie Dantin returns to NCAA’s this season looking to be even huger for the Tigers after stumbling in prelims of her third event – the 3-meter – and failing to score last year. This year, she’s joined by Anna Aguero, who got in on the strength of a great 1-meter performance but isn’t bad in the other two either. The Tigers have perhaps the biggest advantage in diving in that they’ll be in their home pool – and a home pool in diving is worth at least double what it is in swimming. Knowing where to spot, having a good feel for the boards. All of that is key. I’d say top-end is around 60 for the pair, and with home-pool they’ll get to at least 40.

5. USC Trojans (1 diver) – The Trojans only got one diver in, Tori Ishimatsu, but she’s a very good one as she won the Zone E 1-meter and was 2nd in the 3-meter. She and Arizona State’s Elina Eggers had a great battle throughout the week and are two of the more complete divers in the country. For USC, this could turn into as many as 35 points, but as few as 20 if Ishimatsu struggles at NCAA’s like she did last year. I’m leaning more towards the high-end.

6. Cal/Stanford (1 diver each) – Cal’s Kahley Rowell and Stanford’s Stephanie Phipps gave both of the bay area schools a qualifier for NCAA’s. They were the last two selections for the western Zone E, though, so they did well to get in. Cal diving is starting to turn around under new coach Todd Mulzet, and this is the Bears’ first NCAA qualifier since 1991 (and only second ever). Rowell was 3rd on the platform behind two of the best (Tori Ishimatsu from USC and Elina Eggers from Arizona State), and could very well score at NCAA’s in that one event – maybe towards the top of the B-Final for 6 or 7 points. Phipps dives strictly sprinboard, and will looking for the same total improving off of her 17th-place finish on the 3-meter last season.

7. Tennessee Volunteers (2 divers) – Tennessee’s Tori Lamp should be in the running for comeback-of-the-year nation wide, in any sport. She without a doubt earns the honor in NCAA Swimming & Diving. After two years were wiped out with various illnesses and injuries, the former all-world diver in high school was named the SEC Diver of the year this season and won the Platform at the Zone B Championships. She’ll be joined by teammate Jodie McGroarty. If Lamp’s shoulder holds up (and there’s no indication it won’t), she’ll be upside of 30 points by herself.

8. Arizona Wildcats (1 diver) – After a stumble getting settled in Tucson at the beginning of the season, Arizona’s new diving coach Omar Ojeda has been nothing short of spectacular. He worked Sam Pickens into actually winning the 3-meter over a pair of All-Americans in that Zone E, and 2nd on the 1-meter. She only dives platform, and was a qualifier last year but didn’t score. That’s going to change this year. If she hangs with Eggers and Ishimatsu again, she’ll go for 25.